George Monbiot has recently published some thought provoking articles about the dilemmas facing people who are focused on protecting the natural environment. Those articles have made me think hard about trying to share my own thoughts on the matter, perhaps offering a way of overcoming at least some of the challenges. One of my favorite […]

Chairman Gregory Jaczko testified recently that the NRC decided to begin closing down the agency’s effort to review the Yucca Mountain license application in early October, 2010. Some of his fellow commissioners testified that they did not agree with the decision and they do not agree that the commission has made the policy decision to […]

On May 4, 2011, the Subcommittee on Energy and Power and the Subcommittee on Environment and the Economy conducted a hearing titled The Role of the Nuclear Regulatory Commission in America’s Energy Future. Watching that hearing and digesting what I heard has resulted in several sleepless nights. I have been struggling with how to share […]

The Economist recently published a column titled Climate politics: Flush with cash. So what? that described the results of a recent study by Matthew Nisbet, an researcher at American University in Washington, DC. According to Nisbet, groups classified in the environmental category spent almost $400 million on climate change and energy issues in 2009. The […] 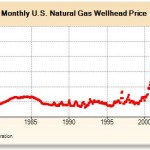 I am in a snarky mood this morning. Please forgive me while I try to explain the sources of my wry amusement – and my continuing worries that keep me from getting a good night’s sleep. Yesterday, I was in a conversation with a man who was explaining the recent changes in Nuclear Regulatory Commission […] 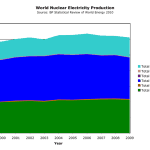 Twenty-five years ago today, the operators at unit 4 of the Chernobyl nuclear power station violated enough procedures and by-passed enough safety systems to cause their water-cooled, graphite-moderated reactor to suffer a nuclear power excursion large enough to cause a steam explosion. The force of that steam explosion was strong enough to lift the lid […]

This is a guest post by Ted Rockwell. He wrote it in 1998, but the information and opinions remain valid today. The words between the lines below are Ted’s. Begin guest post FEAR OF RADIATION IS KILLING PEOPLE AND ENDANGERING THE PLANET TOO Theodore Rockwell MPR Associates, Inc., U.S.A. ABSTRACT We are permitting tens of […] 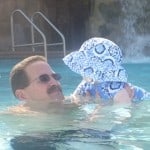 Mark Hertsgaard, the author of Hot: Living Through the Next Fifty Years on Earth, appeared on Democracy Now on Friday, April 15, 2011. He made several important statements that lead me to believe that he might be one of the next influential environmental writers to be swayed by evidence to become a nuclear energy supporter. […] 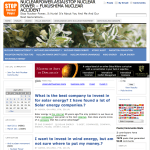 The overreaction and stoked fears about the events at Fukushima continues. One month ago today, I wrote an article titled Nuclear plant issues in Japan are the least of their worries that exposed my ignorance of the differences between various kinds of containment designs and was a bit too optimistic about the eventual releases of […] 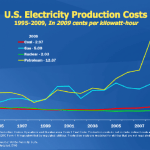 On April 8, 2011, Alan Nogee, Director of Climate & Energy Strategy and Policy for the UCS posted the following on Twitter. Cato’s Jerry Taylor takes #nuclear power 2 the free market woodshed. Ouch! Forbes. He repeated that tweet with a better link and called Taylor’s opinion piece a “must read”. The article that Alan […]

The US House Energy and Commerce Committee held a hearing on April 6, 2011 billed as “The U.S. Government Response to the Nuclear Power Plant Incident in Japan”. During the hearing, Dr. Edwin Lyman of the UCS and some of his allies in Congress made a point of discussing some internal emails from regulators at […]