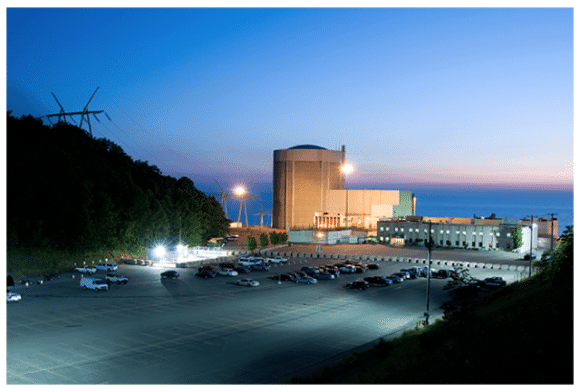 Workers, school system administrators, neighbors, local businessmen and elected officials screamed and danced with excitement when Entergy announced that it would continue to operate the Palisades Nuclear Power Plant through 2022, when its current power purchase agreement expires. Entergy stated that it “will continue to make all necessary investments and maintain appropriate staffing, in accordance with strict licensing standards” but also reminded its employees and investors that “Entergy remains committed to its strategy of exiting the merchant nuclear power business.”

Kevin Kamps, a representative of Beyond Nuclear, a 15-year old antinuclear organization with 7 voting members and total contributions of $1.8 M from 2010-2015 (IRS form 990 2015), expressed his disappointment with the decision.

Atomic Insights does not run ads. We encourage everyone to read our content and discuss it civilly in our moderated forum. Generous readers like you help to defray costs and provide sustaining income.

In December 2016 during the season in which people with good, steady jobs living in pleasant, caring communities are normally happily attending holiday parties, Entergy made an announcement that put several thousand people on edge. Via a press release dated December 8, 2016, the company said that it had decided it was a prudent business decision to close the Palisades plant on October 1, 2018.

The news shocked the workers, the local community and the nuclear energy industry, especially since the plant was operating profitably and had a contract known as a power purchase agreement (PPA) with Consumers Energy. Instead of continuing with a comfortable upper Midwest Christmas season, thousands of affected people were forced to begin thinking about their futures without the plant that had been operating since 1971.

Judging from announcements of meetings and proposed response plans, many of those affected have spent a lot of time during the past nine months doing unfamiliar and previously unplanned activities.

Why Did Entergy And Consumers Energy Agree To Close Palisades Early?

The PPA guaranteed Entergy that Consumers Energy would buy virtually all of the power Palisades was capable of generating at a price that was almost guaranteed to remain profitable. As is always the case for suppliers who sign fixed price, long term contracts, there was a non-zero risk of losses caused by unforeseen changes in the operating, maintenance or capital investment budgets.

Closing the plant on Oct. 1, 2018 instead of in the spring of 2022 would have resulted in a reduction of $344 M in cash flow between the electricity supplier and the electricity purchaser. The analysts for both Entergy and Consumers Energy believed that electricity, which Consumers Energy is committed to supplying reliably to its commercial and retail customers, could be purchased more economically from other sources.

The two companies agreed to split the change in cash flow by having Consumers Energy pay Entergy $172 to buy out the contract. Consumers Energy would then seek recovery of that amount from its customers and would have $344 million available to purchase power.

Presumably, customers would benefit when Consumers Energy bought the replacement power at whatever price demanded by the competitive market at the time that the purchases would need to be made.

Last week, the Michigan Public Service Commission determined that Consumers Energy would be allowed to recover $136.6 million instead of the requested $172 million.

After a week’s worth of analysis, Entergy and Consumers Energy agreed to cancel their deal for an early termination of the PPA. Instead of stopping production of 811 MWe of virtually emission free electricity, firing 600 direct employees, and cancelling two refueling outages, Entergy would continue running Palisades in a responsible manner under the continued oversight of the Nuclear Regulatory Commission.

Though Entergy stated that it remains committed to its decision to exit the merchant nuclear power plant operating business, the decision to continue operating Palisades provides numerous benefits to a large number of stakeholders.

Entergy’s stated that its free cash flow will be $100 to $150 million higher than it would have been if the plant had been closed in 2018. If the recently proposed resiliency pricing rule proposed by DOE is adopted, Entergy might have to fight off potential plant purchasers.

Aside: The FERC issued a request for comments on the proposed rule (NOPR) and established a comment due date of October 23. The short turnaround demonstrates the proper sense of urgency. It’s plenty of time for informed organizations and individuals to compose useful responses. Please take the time to respond. End Aside.

Rep. Fred Upton, the Congressman that represents the district that hosts Palisades, welcomed the announcement as beneficial to the workers and the community. He also reiterated his position as a nuclear energy supporter.

South Haven City Manager Brian Dissette expressed relief that his community would not be losing the residents who had jobs at the plant. “They’re important members of the community.”

Bobbi Moorehead, the Covert Schools Superintendent said that her team was thankful and “over-the-top excited.” Entergy’s annual tax payments to her school system represent half of the $7 M budget.

Dennis Palgen, the supervisor of Covert Township, said he could not think of any negatives from the decision.

Even Kevin Kamps and his Beyond Nuclear organization will benefit, though they might be grouchy about it. The continued operation of nuclear power plants gives his organization a basis to remain in business and to continue to seek sustaining contributions. Its members can continue gathering, strategizing, protesting and occasionally eating brownies together.

The US environment and electrical supply system measurably improved yesterday. That is something worth celebrating. The New York State Department of Public Service (NYSDPS) took a small, but significant step forward yesterday. By a vote of three yeses and one concur, the commissioners decided to implement a clean energy standard that includes zero emission credits…

Nuclear energy in the Republic of Korea is being threatened as a result of the May 9 presidential election of Moon Jae-in. Since at least 2012, when he suffered a narrow election defeat, Moon has advocated a halt to nuclear plant construction, prohibiting license extensions and achieving a “nuclear zero” policy by 2060. With the…

Last night, CNN Presents aired a completely one sided and inaccurate portrayal of the Vermont Yankee nuclear power plant. It extensively quoted both Arnie Gundersen and Bernie Sanders and included a staged interview that made the Nuclear Regulatory Commission look both incompetent and unresponsive. That episode is scheduled to be repeated tonight. Here is a…

Cameron Reilly is the founder and CEO of The Podcast Network. He is visiting The Atomic Show to share some thoughts on using the new media tools to spread information about niche topics. Among nuclear advocates, it is commonly believed that “the media” is one of the reasons for the end of the first Atomic…