Many of the most virulent anti-nuclear activists have begun focusing almost exclusively on spreading the assumption that nuclear energy means expensive energy. They have been helped in this effort by statements from the established nuclear industry who claim that new plants are so expensive that they require government assistance and incentives in order to get them financed and built.

The fundamental aspect of nuclear energy that the rest of us need to understand is that fission heat is actually quite cheap. The average total production cost from a US nuclear power plant today is just 1.86 cents per kilowatt-hour. That total is normally broken into two pieces – fuel costs and non-fuel Operations and Maintenance costs. For 2008, nuclear plant owners in the US spent an average of just 0.49 cents per kilowatt hour for fuel and 1.37 cents per kilowatt hour for non-fuel O&M. Here is a quote from the Nuclear Energy Institute that describes what is included in those numbers:

This is the total annual cost associated with the “burnup” of nuclear fuel resulting from the operation of the unit. This cost is based upon the amortized costs associated with the purchasing of uranium, conversion, enrichment, and fabrication services along with storage and shipment costs, and inventory (including interest) charges less any expected salvage value.

For a typical 1,000 MWe BWR or PWR, the approximate cost of fuel for one reload (replacing one third of the core) is about $40 million, based on an 18-month refueling cycle. The average fuel cost at a nuclear power plant in 2008 was 0.49 cents / kWh.

Because nuclear plants refuel every 18-24 months, they are not subject to fuel price volatility like natural gas and oil power plants. 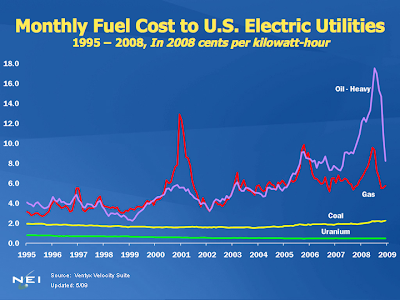 This is the annual cost associated with the operation, maintenance, administration, and support of a nuclear power plant. Included are costs related to labor, material & supplies, contractor services, licensing fees, and miscellaneous costs such as employee expenses and regulatory fees. The average non-fuel O&M cost for a nuclear power plant in 2008 was 1.37 cents / kWh.

When nuclear plants are producing and selling electricity into the US grid, where the wholesale price of electricity has a weighted average of more than 5 cents per kilowatt hour, a 1000 MWe nuclear power plant will produce about $275 million per year in revenue above its cost of operation.

That is a very nice asset to have, as long as the capital repayment expenditures are less than that amount. How many manufacturing assets are there that can run for 60-80 years with predictable, low operating costs and a product that is always in some demand and has no potential for going out of style?

It is not as if there is something uniquely difficult about turning atomic heat into electricity compared to turning fossil fuel combustion heat into electricity. The conversion process is well understood and can be learned from textbooks that have been readily available for at least 5 decades. The machinery is very similar to the machinery used in fossil fuel plants and has had most of the kinks worked out, so it is quite reliable. Because the mass of material that has to run through the plant every day is several powers of ten smaller than similarly sized fossil fuel plants, fission plants can be far simpler, less dependent on external supply chains, and easier to operate.

The material input into machinery needed to perform the conversion from potential energy in uranium and thorium should not only be reasonably predictable, but it should lower than the total resources required for machinery that supports operation of a fossil fuel plant. (That statement includes the equipment associated with fuel delivery and waste disposal.) The conversion equipment should be subject to the same kinds of manufacturing and construction process refinements that decrease the costs for most manufactured products.

As many formerly dominant players in markets as diverse as appliances, microprocessors and telecommunications equipment have found, the only route to survival is continued improvements that lower costs without sacrificing quality. If they decide to defend their existing models and maintain high costs, they will be overrun by more nimble competitors who resolutely work to improve and refine their production systems.

This same model has been applied in most energy production systems – except nuclear. My contention is that the failure cannot be blamed on uranium, thorium or the fission process itself; it must be blamed on human decisions that can be changed. If the last remaining issue that hinders widespread nuclear energy deployment is system cost, the answer to that challenge is to implement improvements that lower the cost without changing the existing track record of reliable, safe, low cost performance.

In one of my many jobs, I was the General Manager of a small plastic injection molding company that competed across a number of product lines with much larger companies and with companies from overseas that had far lower labor costs. We were constantly challenging ourselves with ways to improve production and lower the inputs to our products without sacrificing quality. It is a solvable problem that gets easier as you repeat the same process frequently enough so you do not forget what you learned the last time you did it.

Whenever I hear people say that they resist new nuclear plant construction because “it costs too much”, I want to respond with a measured, logical argument that points to all of the cost drivers that can be attacked and improved. With nuclear energy, we do not have to attack the cost of operators, the cost of fuel, or the cost of transportation. All of those costs are well under control and do not drive the overall costs – remember, they total up to be about 1.86 cents per kilowatt hour.

The cost that we need to attack is the total cost and duration required to move from a condition of no plant to a complete plant that has a 40 year initial operating license with a reliable connection to the grid. The longer it takes to achieve that condition, the longer the delay to revenue generation. The higher the total bill accumulated, the higher the principal and interest payments will be once revenue begins. Most of the components of that total cost can and should be controlled.

If “Wall Street” does not want to provide long term financing that can be repaid with reliable, steady payments for many decades, perhaps Main Street can step in. One of the things to remember about “Wall Street” bankers is that they have been gambling with pension fund and mutual fund money. That money does not magically arrive in Wall Street banks, it gets put there by hundreds of millions of people that live in the rest of the world. Many investors would be happy to be able to count on regular interest or dividend payments in the 5-8% range that lasted for decades; perhaps what we need are some community based banks or investment funds that focus specifically on understanding and taking advantage of the opportunities in long term finance for nuclear energy facilities.

Introducing and deploying disruptive technology is never easy, and it often results in broken business relationships and alliances. It is, however, worth the effort and the risk of potential failure when the payoff is a large and reliable stream of income. The earth will be a much more enjoyable place to live when we successfully enable access to vastly increased quantities of abundant, affordable, emission-free, electricity, heat and vessel propulsion power. Well managed nuclear energy projects have the technical ability to deliver, especially if the people involved apply all of the available lessons from both related and seemingly unrelated manufacturing enterprises.