An old friend sent me a link with intriguing headline on December 2, 2009 – COSCO Investigates Nuclear Option. My first thought was “why would a big box competitor to Sam’s Club be interested in a nuclear option?” That misunderstanding was quickly dispelled when I realized that Lloyds List is not terribly interested in American retailers. For the Lloyds List writers, COSCO is the trade name for China Ocean Shipping Co. (now more accurately known as China Ocean Shipping Group). That made more sense.

Cosco president and chief executive Wei Jaifu has called on international shipping organizations to begin investigating the use of nuclear power for merchant ships. He has indicated that his company will take the lead in the study and that his company has already begun discussions with the nuclear power group in China. As CAPT Wei explained, nuclear ship propulsion technically proven, but there remain some questions about acceptability and economy.

Peter Swift, the managing director of Intertanko, expressed serious reservations about the use of nuclear power on board ships. As Intertanko’s “About Us” page explains, “INTERTANKO has been the voice of independent tanker owners since 1970, ensuring that the oil that keeps the world turning is shipped safely, responsibly and competitively.” I am cynical about negative reactions to nuclear power from anyone who is economically dependent on trading or transporting fossil fuel.

Mr. Smith worried about the public acceptance of the technology and also quantified the challenge of finding a sufficient pool of qualified nuclear engineers to man the ships. He asserted the need for at least 5 qualified operators for each ship. With a world fleet of about 100,000 ships that are large enough to put nuclear power to beneficial use, he worried that the build out would be dependent on the development of a half a million trained operators.

The current inventory of trained nuclear propulsion plant operators should not be considered to be a barrier; instead it should be thought of as a challenging business opportunity to create and supply the educational and training programs required. Based on my own experience, you can take a person with a BS in English, put him through an intensive one-year training pipeline, and then send him to sea. After a couple of months of under instruction time, he can be qualified to stand watch on a plant and perform routine maintenance.

If you provide about 2-3 years worth of operating experience and self-study, he or she could successfully pass a rigorous oral and written test that would certify qualification to manage an entire plant. The world has an adequate seed inventory of people who have gone through similar training and served for a varying number of years at sea. The US nuclear powered Navy, which has been operating ships at sea for more than 50 years, trains about 3,000 nuclear propulsion operators every year to replace those that leave the service. There are also experienced labor pools in France, the UK, Russia and China that can serve as the teachers and mentors, so growing the necessary work force can be done at least as quickly as the plants and ships can be built.

Most of you will remember that the NS Savannah was the first and only attempt made in the US to build a nuclear powered merchant ship. She was – and still is – a beautiful piece of naval architecture with lines more reminiscent of a luxury yacht than a commercial vessel. 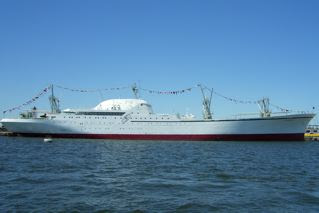 She served as an ambassador vessel during a promotional period under Eisenhower’s Atoms for Peace program, hosting numerous groups of dignitaries on short trips. She had about 100 luxury cabins, a swimming pool, a library, a banquet hall with a dance floor, and an excellent galley. As almost an afterthought, she also had a few bulk cargo holds with some loading cranes that were positioned more to look good than to provide rapid loading.

Not surprisingly, she was an economic failure when operated as a cargo ship during the late 1960s, after her days as a show vessel were finished. Not only was her capacity limited by all of those staterooms and other accommodations, but also her operating budget included the costs of maintaining a shore based support infrastructure that was idle most of the time. Her competitors were also able to purchase fuel oil at a time when the cost per barrel was about $2-3.

I have an old book in my personal library titled “NS Savannah Safety Assessment.” That yellowing technical book about the NS Savannah reveals some thought provoking information about the opportunity a reconsideration of nuclear propulsion can bring the uranium industry. She was fitted with a steam plant that produced roughly 15 MW of propulsion power. Her nuclear core used about 6800 kilograms of 4.5% enriched uranium. When she was built in the early 1960s, the standard for nuclear fuel burn-up was about 7,000 MWth-days per metric ton of uranium, so that fuel load was designed to last for a little longer than 2 years at full power, or about 3 years of operation in a typical trade profile. Modern light water fuel achieves a burn-up of about 40,000 MW-days/metric ton, so a 6800 kg fuel load for a 15 MW steam engine would last about 12 years.

There are ways to reduce the uranium consumption significantly, but there is no doubt that propelling ships with engines that fission uranium would create a significant market opportunity for the world’s uranium producers, who have just recently emerged from a several decade long period of tough economic times in an industry with vast potential to exploit already known deposits. There are also technological opportunities (like the Adams EngineTM) to improve the balance of the plant that might even include a shift away from steam propulsion, but that is a step that would require more refinement. Steam is the known and proven way to use nuclear heat in propulsion, just like it is in large central station power plants.

If cost projections from companies like B&W, which built the power plant for NS Savannah and is now working on a moderately sized reactor for land based operation, are close to correct, a power plant the size of Savannah’s would cost approximately $5,000 – $10,000 per kilowatt of capacity, after accounting for the difference in scale between their proposed plant and a smaller ship sized unit.

A 15 MW ship propulsion unit with a 12 year fuel supply might cost $75 to $150 million. It would replace a 15 MW diesel engine costing $40 million, and burning bunker fuel oil costing approximately $15,000 to $20,000 per day at today’s prices. After 12 years of operating at a 67% capacity factor, that large diesel engine would consume approximately $75-$100 million in fuel oil at today’s prices. The cost of the nuclear fuel would be known at the time that the engine is
purchased, while the cost of bunker fuel during the next 12 years is anyone’s guess. With well-understood design techniques, replacing the nuclear fuel after 12 years would be a 30-60 day process. The new fuel load would cost about $7 million.

The world has accumulated thousands of ship years of operating experience for nuclear powered ships. The country with the most experience and most refined technology is the United States. Perhaps it is time for the country to have the same developmental attitude towards its submarine and aircraft carrier engines as it does towards its fighter and transport jet engines. Certain aspects of the design can be retained as militarily useful and protected, all of the rest of the design information should be shared as the basis for exceptional commercial products that create jobs and opportunities for America to compete in a lucrative global market. It appears that the Chinese are going to do it whether we decide to do so or not.

Bloomberg.com’s Reed V. Landberg wrote an article titled Blair’s Decision on U.K. Nuclear Power May Cost Popularity that was published on April 14, 2006. The article discusses how polls that were conducted in Britain in October and November of 2005 indicate that nuclear power is not a “popular” choice when compared to investments in renewable…

The Areva Blog has posted a quote of the day from Stewart Brand, which is a “must read”. If you are interested in the interview that was the source of the quote, visit the Newsweek blog to read Stewart Brand, an Icon of Environmentalism, Talks About Embracing Nuclear Power. Once you have read the great…

World Nuclear News has published a brief article with the following thought-provoking quote “EDF Energy said: “One element we will be consulting on as we develop our plans is the visual impact the plants will have.” I think it is fantastic news – perhaps there will be even more people interested in having a nuclear…

The Energy Collective has an article titled Why We Must Make Clean Energy Cheap that has generated a thoughtful discussion. I encourage you to read through the comments and perhaps add your own contribution to the exchange.

There is a story in the Sunday, January 25, 2009 issue of the Washington Post that is contains one of the best illustrations of the Jevons Paradox that I have seen in a while. (From the Wikipedia entry – “In economics, the Jevons Paradox (sometimes called the Jevons effect) is the proposition that technological progress…

There is a sobering article on the front page of the Wall Street Journal (subscription only) today titled Crop Prices Soar, Pushing Up Cost of Food Globally. Here is an excerpt from the story: One of the chief causes of food-price inflation is new demand for ethanol and biodiesel, which can be made from corn,…