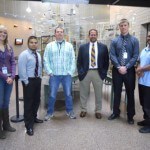 After an informative tour of the NuScale facilities in Corvallis, OR on October 20, I continued my quick visit to the Pacific Northwest. I had originally arranged my travel plans to fly into Portland, OR instead Richland, WA — which was my ultimate destination — for a variety of reasons. It enabled the visit to […] 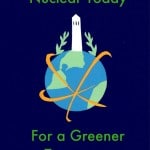 On August 5, 2014, Professor Barry Brook, Ian Hore-Lacy and Professor Ken Balwin chatted with ABC [Australian Broadcast Corporation] 666 morning host Genevieve Jacobs about nuclear energy. Each member of the panel provided a brief statement and then there was a lengthy question and answer period lasting nearly an hour. You really should watch the […]

Armond Cohen is the Executive Director of the Clean Air Task Force. We spoke in January 2008 on episode #78 of the Atomic Show. At that time, Armond and his organization did not take a position on nuclear energy. On March 28 of this year, I heard Armond give a talk at the commemoration of […] 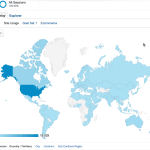 Every once in a while, I skim through Google Analytics to learn a little more about the people who are visiting Atomic Insights. (My title is making the assumption that most visitors are actually reading the pages that they land on.) Here is the most recent global map. I’m not sure why the east coast […] 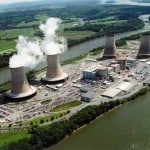 On March 28, 1979, a little more than thirty-five years ago, a nuclear reactor located on an island in the Susquehanna River near Harrisburg, Pennsylvania, suffered a partial core melt. On some levels, the accident that became known as TMI (Three Mile Island) was a wake-up call and an expensive learning opportunity for both the […]

This video provides an encouraging view of the positive impact that the Vogtle expansion project is having on the local community. It’s 4,000 – 5,000 construction jobs is just one part of the economic impact; that $23 million dollar property tax check shown during the video is another part that apparently brings smiles to the […]

It has been almost two weeks since a continuous air monitor alarmed at the Waste Isolation Pilot Plant (WIPP). Though no one was hurt and no one is likely to be harmed in the future, an irregular drip of information interrupted by periods of silence has gradually painted a picture of a serious event worthy […]

On Monday, February 24, representatives of the Waste Isolation Pilot Plant (WIPP), the Carlsbad Environmental Monitoring and Research Center (CEMRC), and local officials will meet with the public. The planned purpose of the meeting is to provide a status report and answer questions about the airborne contamination detected in the facility and the trace contaminants […]

Recent events at the Waste Isolation Pilot Plant (WIPP) provide an opportunity to reinforce the need to practice good communication skills in order to improve the future response to a contamination event. Though there is no public hazard associated with airborne contamination levels of 0.64 Bq of Am-241 and 0.046 Bq of Pu-239/240, the New […] 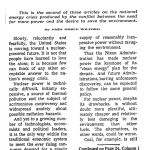 Yesterday I came across a New York Times front page article from July 7, 1971 titled Nation’s Energy Crisis: Nuclear Future Looms. It is the second article in a three part article on the energy crisis that was capturing America’s attention in 1971 – two years before the Arab Oil Embargo. The discovery knocked me […]

One of my favorite pastimes is listening to Adam Curry and John C. Dvorak, who bill themselves as “media assassins”, on the No Agenda Show. On yesterday’s episode, number 580, John and Adam spent about 15 minutes (starting at about 1:44:00) discussing the absurd tales that are propagating around the web regarding USS Ronald Reagan […]