In 1960, there was growing public concern about the potential health effects of atomic radiation. It was well known that low intensity ionizing radiation had always been a part of our natural environment. It was also well known that mankind had developed ways to produce and control ionizing radiation to great benefit in diagnostic medicine and in treatment of certain kinds of cancer and other health problems.

They did not know that the Rockefeller Foundation had rescued Herman Muller out of poverty and obscurity when he was 55 years old and at great risk of losing his job.

However, humans had also developed incredibly powerful explosives that could destroy whole cities with a single device. The great majority of the world’s population was rather blasé about those weapons; most knew something about them, but they continued to go about their daily lives without much thought about the existence of The Bomb.

This 1960 documentary provides a reasonably accurate snapshot of public knowledge and attitudes about radiation in 1960, roughly 3 years before the Limited Test Ban Treaty was ratified.

Life and Radiation, Hugh O’Connor, provided by the National Film Board of Canada

For a narrow slice of the population, The Bomb was far too important a development to ignore.

Some were excited enough about the science and engineering challenges associated with creating ever larger or more precise explosions to select a career involving that enterprise. Some were deeply concerned about the geopolitical implications of The Bomb and issues surrounding its control and ownership. Some were drafted into positions that required them to be involved in nuclear weapons development and testing. Some were concerned about the implications of widespread distribution of radioactive materials that had never before been found on Earth.

Even though there were only a handful of power stations around the world that produced electricity through the use of atomic fission as a heat source, there were also a growing number of people who clearly understood that the intensely powerful heat unleashed in atomic fission could be readily controlled and harnessed to perform the same tasks that had long been performed by burning materials like coal and oil.

Not surprisingly, a portion of the people who thought about using atomic fission as a power source were excited and positive about developing ever increasing ways to use the heat as a beneficial product that could improve the lives of everyone on the planet. Also not surprisingly, the people whose livelihoods, capital resources, or political power were deeply enmeshed in the industrial activities associated with discovering, extracting, transporting, marketing, refining and using materials like coal and oil were wary of the implications of having to share what had been their nearly exclusive market for more than a century.

People who were thrilled about the future wanted to learn more about radiation and its effects so they could help the push the risks down and the benefits up.

Those who were worried about competition were more motivated to create and propagate a myth that we already knew that radiation was too dangerous to use very often or for very many purposes.

It’s possible that there was some awareness somewhere, but I’ve been unable to find evidence that anyone recognized what some leaders in the hydrocarbon economy had done to take preemptive action to limit the growth of nuclear power.

It seems that few, if any, recognized that some of what they were being told about radiation and nuclear energy was part of a purposeful campaign to create fear. Here is an incomplete list of what people in 1960 did not know or understand. Many items on the list still need to become more widely known.

They did not know that the Rockefeller Foundation, which had earned worldwide respect for its generous support of science and scientists, was dependent on income from its vast holdings of corporate stocks in companies that had once been part of the Standard Oil empire. In the 1950s and 60s, fully 70% of its annual income and ability to provide grants came from coal and oil related stock dividends or bond interest payments.

They did not know that a significant fraction of the world’s leading geneticists had received research funding or career support fellowships from Rockefeller Foundation money.

They did not know that the Rockefeller Foundation had rescued Herman Muller out of poverty and obscurity when he was 55 years old and at great risk of losing his job. Representatives of the RF personally communicated with the President of the University of Indiana and also provided a generous grant in order to obtain Muller’s appointment as a professor in 1945. That intervention came after an unsuccessful effort to find work after his boss at Amherst College told him that his wartime position as a biology teacher for liberal arts undergraduates would not be renewed for the 1945 fall semester. 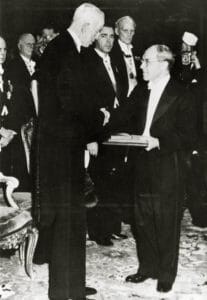 They did not know that that it was quite likely – thought not yet proven by hard evidence – that the RF had played an important role in selecting Herman Muller as the recipient of the 1946 Nobel Prize in Physiology or Medicine. That award helped to both ensure fiscal stability for the widely-traveled and controversial geneticist and to establish his credibility as the world’s leading expert in the genetic effects of atomic radiation.

They didn’t know that Lewis Strauss, the highly visible and controversial chairman of the Atomic Energy Commission, had been a Rockefeller family financial advisor during the period between his service as one of the first AEC commissioners and his 1953 appointment as the Chairman of the AEC. They didn’t know that Strauss had made generous contributions to Eisenhower’s presidential campaign with the unproven, but likely, goal of being his key advisor on atomic energy matters.

They didn’t know that following Strauss’s dismissal of the health effects of weapons fallout after the Castle Bravo event the press became very interested in accusing the AEC of underplaying the risks of radiation exposure. Taking advantage of the attention Strauss quietly contacted his friends on the Rockefeller Foundation Board of Trustees and asked them to contract with the National Academy of Sciences to produce an “independent” study on the Biological Effects of Atomic Radiation.

They didn’t know that Strauss probably played a role in the selection of the members of the Genetics Committee, in Warren Weaver’s assignment as the chairman of that committee, and in the purposeful exclusion of several geneticists who were known skeptics about Muller’s often asserted position that all radiation posed a risk of genetic mutation and that most genetic mutations have harmful effects.

They didn’t know that Strauss might have purposely been seeking to elevate Muller’s status by very publicly banning him from presenting a paper at First International Conference on Atomic Energy in Geneva held during August 1955. As a former shoe salesman, investment banker and lay religious leader, it is highly likely that Strauss had a good understanding of marketing techniques and the associated value of created martyrdom in enhancing the role of a critic with a minority opinion.

They were not aware of the numerous instances that Edward Calabrese has uncovered in which Muller and other geneticists manipulated evidence to create the default assumption that all radiation doses carry a risk of harm and that the risk increases linearly with increasing dose.

They didn’t know that Arthur Sulzberger, the publisher of the New York Times, was a member of the RF Board of Trustees or that he was involved in the creation of a communications plan for widely promoting the Genetics Committee section of the report produced by the NAS BEAR 1 committee.

Using the information that was either unavailable or unknown in 1960, combined with modern knowledge of the genetic effects produced by ionizing radiation, it’s clear to me that the LNT is an inaccurate fraud. A couple of generations of scientists and statisticians have accepted it as reasonably predictive without too much effort to challenge it. They logically assumed that its science was sound and also recognized that it was nearly impossible to disprove its validity.

Aside: I’ve come to have some degree of admiration for the cleverness associated with creating a theory that is both acceptably frightening and exceedingly difficult and costly to disprove. Until Edward Lewis, another RF-linked scientist, extended the idea of genetic damage to the potential of causing leukemia with his 1957 paper, Muller and his geneticist colleagues were limited to predicting harm to progeny sometime in the distant future. End Aside.

Many of my professional associates who are specialists in radiation biology have been working for decades to show that the LNT is wrong. Their efforts have been stymied by people who stubbornly believe that it is the default position that must be conclusively disproven before a different model can be used as the basis for radiation protection regulations.

It seems to me that there is sufficient evidence of motivated misinformation associated with the birth of the LNT to allow honest scientists to overthrow the accepted position. It’s time to restate the null hypothesis from one that assumes increasing harm in a straight line starting at zero dose into one that more realistically assumes there is no harm until the point at which harm can be conclusively detected.