Last night I had the pleasure of attending a book talk by Amanda Little, author of Power Trip: From Oil Wells to Solar Cells – Our Ride to the Renewable Future. It was the last stop on her ten city tour to promote the book. It was fitting that this was the final stop in the tour – Washington, DC an important battle ground in energy.

Specifically, Amanda gave her talk in a bookstore in Chevy Chase on Connecticut Avenue north of the National Zoo, which happens to be close enough to where Amanda grew up and went to school that her mother is a long time customer of the store. She had lots of friends in the audience; there were probably 50-75 people there, which is a great showing for a cold Tuesday evening talk about a book on energy.

The talk was appropriately hosted by the Prose and Politics bookstore, one of those terrific independent book sellers that remains standing because it serves a unique customer base. In Chevy Chase, Maryland there are a lot of political addicts who do not care much about paying a little extra for their books and are loathe to drive to a big box retailer or shop online. 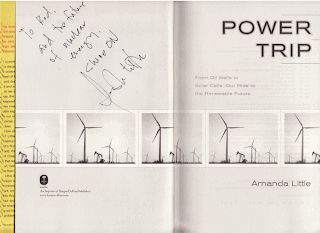 Aside: Funny story. While waiting for the talk to begin, I found a chair and took a seat. There were three delightfully engaging women of a certain age talking next to where I was sitting. They were obviously old and dear friends. I had to smile when one of them mentioned that she was enjoying Audible books downloaded onto her iPod. One of the other ladies said in amazement, “now aren’t you the tech savvy person these days.” The iPod owner then went on to explain how much more convenient it was to have a huge library of audio books with a few clicks rather than having to borrow and return tapes to the community library. End Aside.

One of the reasons that I took the time to attend was that Amanda, an engaging writer and speaker, had managed to write a journey of discovery book about energy – the same genre as Gwyneth Cravens’s Power to Save The World – that covered 376 pages of relatively small type and still only mentioned nuclear energy in passing on two pages. I had seen Amanda talk about her book before and I wanted the opportunity to ask her about the energy “elephant” that she does not like to mention.

Interestingly enough, others must have had the same thought as she toured the country. She mentioned during her introduction that she did not plan to talk about nuclear in the talk, but that it had been one of the most frequently asked questions during the tour and she would be happy to talk about it during the question and answer session.

Once the talk was over, I stood up and asked the first question by describing my experience of having lived for months at a time on a ship with a tiny fuel source that lasted for 15 years.

Oops – it is time to head off to the day job. I’ll share more details about the exchange when I return. However, here is how she signed my book:

To Rod and the future of nuclear energy. Shine on.
Amanda Little.

You can see a larger version of the scanned image of the inside cover of my new prized possession by clicking on it.