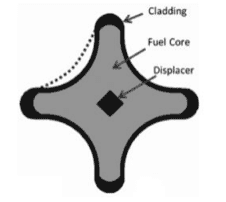 Lightbridge, a company that was originally incorporated as Thorium Power, Inc., has achieved significant technology developments after making a strategic turn in 2010 from thorium based fuels to low enriched uranium metal alloy fuels.

As funding dried up from the government agencies supporting their thorium work, the company chose to use its assembled nuclear engineering expertise to pivot to a more commercially attractive product line.

On March 15, Lightbridge and Areva announced a joint development agreement (JDA) that will lead to a joint venture to develop and produce fuel for light water reactors using designs that Lightbridge patented in 2014.

This agreement is in addition to previously announced agreements with BWXT Nuclear Energy and Canadian Nuclear Laboratories to fabricate partial length fuel rods for irradiation testing.

Each of the partners in the Lightbridge-Areva JDA will share the cost of the work scope, with Areva’s contribution being mainly in kind access to specialized equipment and facilities. The exclusivity of the agreement is limited in time and scope.

Lightbridge has obtained the final regulatory permissions needed to begin an operating temperature, pressure and irradiation testing program at the Halden Research Reactor in Norway in 2017. The company has a contract with Norway’s Institute for Energy Technology to perform the operating condition demonstration and the post irradiation examination at the nearby Studsvik facility in Sweden.

Their company’s evolutionary fuel is designed to be a new and improved replacement for the light water reactor fuel — UO2 pellets in a zirconium tube — that has been the standard since the development of the Shippingport reactor in the mid 1950s.

They walked me through the company’s current presentation and provided clarifying information.

If it ain’t broke, improve it

Near the beginning of our conversation, Seth said, “Here’s a phrase you don’t hear very often in the nuclear business – we are under budget and ahead of schedule.”

Grae was upbeat to the point of being bubbly following a two-week period in which the company won the Technology Research Award at CleanEquity® Monaco 2016, announced a binding joint development agreement with Areva, held a business update conference call that provided additional announcements met with congratulations, and received favorable coverage from World Nuclear News, the Nuclear Energy Institute and Energy Policy.

Lightbridge’s metal alloy fuel is positioned to be a non-disruptive improvement for nuclear power production that can be adapted to fit into a number of existing supply chains and established regulatory review processes.

The newly developed individual fuel pins are substantially different from the existing UO2 pellets stacked into cylindrical zircalloy tubes, but they can be arranged into assemblies that are one-for-one replacements for existing assemblies in commercial PWRs, BWRs, and even light water SMRs.

The guiding concept for the new design was to develop a fuel for existing power plants that would improve their utility and extend their economic service life. The resulting design produces increased power, extended fuel cycles, and enhanced safety margins.

The cross-section of each individual fuel pin is a cruciform with all three of the component parts (cladding, fuel core and displacer) bonded to each other during fabrication. The fuel core is a uranium-zirconium alloy with much greater thermal conductivity than uranium dioxide. The displacer is an alloy containing burnable poisons for extended-life reactivity control.

The cruciform pin shape provides approximately 35% more heat transfer surface area than cylindrical pins. The zirconium-niobium alloy cladding is slightly thicker on the edges of the pins, the places that appear as points on the cross section.

During its development work for thorium based seed and blanket fuel assemblies, Lightbridge overcame the swelling issue that had limited previously developed low-alloy fuels by creating an alloy with roughly equal parts zirconium and uranium.

The combination of pin shape, pin material, and metallurgic bonding results in an operating centerline temperature that is approximately 1000 ℃ cooler than in a conventional fuel pin.

To provide appropriate stiffness and support, the cruciform fuel pins are twisted and contact each other at 10 cm intervals along the length of a fuel assembly. This configuration eliminates the need for spacer grids and reduces flow resistance while still meeting seismic and vibration resistance requirements.

The reduced core flow resistance produces increased reactor coolant flow rate when coolant pumps run at their designed power and speed. With higher coolant flow and constant core differential temperature, more thermal power can be moved from the core to the steam generators and into the steam turbines.

The roughly 10% increase in electric power output provides an impressive internal rate of return on investment. If the Clean Power Plan is implemented as currently written, power uprates qualify for credits as a clean energy investment.

By adjusting fuel loading and enrichment Lightbridge will be able to provide three variants for pressurized water reactors (PWR):

The 30% power uprate requires some modification of the containment design, fuel handling equipment, and the steam turbine. It is not considered cost effective for existing power plants.

Conversion after enrichment will be from UF6 to uranium metal instead of to UO2. Twisted cruciform fuel pins with bonded cladding will be extruded as a single full length piece. That manufacturing process is a complete shift from the current method loading UO2 pellets into zircalloy tubes. The metal alloy pins will not need internal springs, helium gas, spacer grids or end fixtures.

The finished assemblies will be compatible with existing shipping containers, plant fuel handling equipment, and used fuel storage containers. There will be some modifications required in fuel pools to account for the higher fuel enrichment for new fuel and the initially higher decay heat production after removal from the reactor.

Lightbridge’s strategy is to remain a technology provider and license holder. The company intends to enter into fabrication arrangements with multiple companies with limited exclusivity.

Lightbridge’s Nuclear Fuel Utility Advisory Board includes senior fuel managers from four leading US utilities (Dominion, Duke, Exelon and Southern) that together operate 50% of the US nuclear generating fleet.

In 2015, those companies submitted a letter to the NRC asking it to prepare to review Lightbridge’s fuel design in expectation of a license application submission in 2017 for first use of Lightbridge fuel in a commercial reactor in 2020.

I hope some of you missed us last week. If not, we must be doing something that needs improvement. Just in case you noticed that we did not post a new show last week, we simply were not able to match up our schedules. I had a series of meetings about Adams Atomic Engines and…

Dan Yurman of Idaho Samizdat and Rod Adams chat about nuclear news from India, Idaho, Kentucky, Germany, Scotland, and Vermont Dan Yurman and I had a great time on November 21 talking about a number of different nuclear news items including a large new power plant deal in India for Russian reactors, Dan’s first hand…

A good friend shared a link to a blog titled Taking physics to new audiences: a realisation. It is a wonderful story about a particle physicist who has a twin sister who is a professional historian. Following a conversation about nuclear energy, the physicist has avoided talking to her sister about what she does at…

In the period from 1966 to 1964, there were two basic reactor choices being offered for commercial electric power production. American companies were offering reactors that used ordinary water under pressure as the reactor coolant. British and French companies were offering reactors using pressurized CO2 gas as the reactor coolant. There were substantial technical differences…

A large number of “hot takes” are appearing now that the cold wave that began arriving on Feb 11, 2021 has moved into areas where sub-freezing temperatures in Feb are normal. If the politically charged nature of the takes could be harnessed, the energy released would be able to keep quite a few homes supplied…