The more I have read about the discussions surrounding Vermont Yankee’s license extension, the more I have become convinced that the underlying major issue is the fact that its customers are trying to establish a strong negotiation position. Not only is the plant up for an operating license extension, but it is also operating under a long term supply contract that has been helping to insulate Vermont customers from many of the sharper impacts of fossil fuel price fluctuations.

Throughout a period when most of the citizens in the New England region were paying ever increasing rates for electricity generated mostly by burning natural gas, Vermont electricity customers were paying more stable rates while also producing the lowest per capita level of greenhouse gas emissions in the US.

That pleasant situation has been enabled by two long term contracts – one with Hydro-Quebec and one with Entergy Nuclear – that provided clean, baseload electricity for about 4 cents per kilowatt hour to the electric utilities that distribute power around the state. The largest of those companies is Central Vermont Public Service, but there are a total of 21 different electricity utilities in Vermont, with 75% of them being municipal companies serving less than 5,000 customers.

Though Vermont retail customers have been beneficiaries of those contracts, it appears that the investor owned, municipal and cooperative utilities that buy and distribute the power have also enjoyed a sweet situation – Vermont’s electricity rates are the lowest in the region, but they still average about 3 times the price of that wholesale power. Here is a graph using October 2008 information from the US Energy Information Agency that illustrates the retail rates in New England. 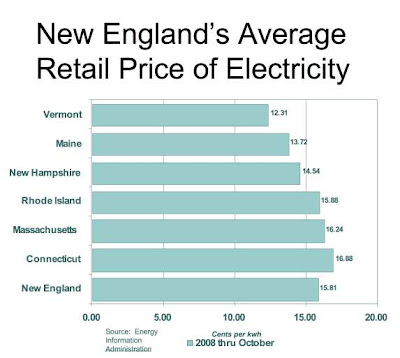 As the time for the license extension and contract renewal gets closer, there has been a lot of discussion about the future. Though much of the public commentary has revolved around questions about plant safety, condenser leaks, and a cooling tower collapse, the real concern is what will happen to electricity power costs once the contract has expired. Well informed people who understand electricity supply markets know that one of the least likely outcomes is a simple extension of the present situation with few changes.

The reason is that Vermont’s electricity market has been partially deregulated. Entergy Nuclear – soon to be Enexus – is under no formal obligation to continue offering below market rates after its current contract expires. Instead, there will be a bidding process that has already begun. The contract terms will be influenced by market factors like the price and availability of natural gas, the market for electricity in Quebec, the regional power grid supply situation, the price of cow dung, and the availability of wind power subsidies. (Note: Central Vermont Public Service projects a future where it might supply as much as 5% of its load from farm produced methane; that is how “cow dung” made the list.)

On a reasonably level playing field, the owners of a plant like Vermont Yankee would be in a very strong negotiating position. They have an asset that produces reliable power, they know their fuel costs are low and steady, they are not going to be affected by carbon cap and trade or taxes, and they have access to plenty of customers though their installed grid connections.

It is my humble opinion that many of the smart people of Vermont have determined that that they need to work a bit to level the negotiating table; their efforts to put the relicensing in question are really aimed in that direction. Here is a quote from a story on WCAX News dated yesterday, March 17, 2009 that supports that interpretation.

Senator Ginny Lyons, D-Chittenden County, said the new report gives both lawmakers and the public a solid place to start from when having conversations about Yankee.

“This is an important report back to the legislature,” Lyons said. “It gives us a sense of how folks who are in the industry and are savvy about the nuclear industry think about the plant.”

Lyons would like to know more about the concerns expressed and how they can be fixed. O’Brien (Vermont Public Service Commissioner, David O’Brien) agrees and says with so many different sources saying Yankee could continue operating it is now up to Yankee to prove it should continue operating by giving the state a power contract.

“If you don’t have a power contract that has real value to Vermont as a host for the plant, then it isn’t a conversation worth having,” (Emphasis added) said O’Brien.

Lawmakers agree, saying they will not talk about renewing Yankee’s license until that contract is in place.

The money involved is worth some effort to capture. With a current capacity of 620 MW operating at 85% capacity factor, the difference in revenue each year between 4 cents per kilowatt hour and 8 cents per kilowatt hour is $185 million. That amount of money (or more) could be split in so many different ways depending on how the negotiations go. No wonder there are so many different voices and points of view in the discussion.