A friend sent me a link to the video for a hearing held yesterday, March 18, 2009 by the Senate Energy and Natural Resources Committee on Nuclear Power.

There were three witnesses testifying at various times; Dale Klein, the Chairman of the Nuclear Regulatory Commission by himself, and then a tiny panel consisting of Marvin Fertel of the Nuclear Energy Institute and Tom Cochrane of the Natural Resources Defense Council. There were a number of very interesting exchanges between the witnesses and Senators with another clear indication that nuclear power has friends and detractors on both sides of the political aisle.

One of the more disturbing discussions took place near minute 76 on the video transcript with some strange questioning by Senator McCain. His serious faced, pointed questions about the danger associated with the decision to cut funding for Yucca Mountain indicated that either he was not there for the entire hearing, or he was not paying attention to the clear statements made by Chairman Klein about the NRC’s confidence in the safety and security of our current method of used fuel storage. For some odd reason, it appeared that Senator McCain believes that we are at a grave risk because we have used nuclear fuel stored in safe, deep pools or in carefully engineered dry storage containers at some of the most secure facilities in the entire country.

Fortunately, Chairman Klein was able to look the Senator in the eye and answer his questions clearly, with equal force and with great credibility from a technical and experience point of view. It was obvious that McCain was also trying to play on his military experience by implying that “national security” experts were worried, but Chairman Klein has some experience in the DOD as well as in the NRC.

As a guy with comparable experience in national security and national security studies as Senator McCain, I take great issue with his assertion that all national security experts would agree that it is somehow safer and more secure concentrate facilities that might be at risk of attack into a single location. Of course, as Klein mentioned, there are plenty of reasons why the existing storage locations are not particularly valuable targets to begin with, but even if they were, most national security experts that I know would agree that there is great value in a bit of redundancy and dispersal of facilities even if the risk of attack is high. If nothing else, that ensures that a single point failure can cause a bit less damage.

It is pretty obvious that Senator McCain believes there is some kind of political gain to be had from turning the Yucca decision into a question of great concern and to be able to say to some supporters – “you see, that would not have happened if Americans had chosen ME as President”. After that exchange, I am more happy than ever with my choice. 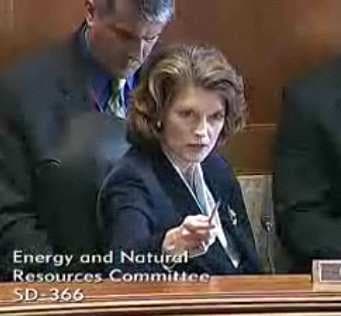 There are several points in the discussions that provide some good entertainment value, at least from the perspective of an atomic geek/political junkie. I was particularly amused by the exchange between Senator Lisa Murkowski and Tom Cochrane starting at about minute 118. Somehow I think that Cochrane’s behavior would have been more appropriate on Crossfire than in a hearing room of the US Senate under questioning by a duly elected Senator of one of our great states.

You might also want to keep watching through Senator Udall’s questions and on into the responses and finger pointing by Senator Jeff Sessions, when he responds to Cochrane’s comment about how there were more nuclear plants cancelled than constructed during the first nuclear boom times. (I wonder just how many wind and solar projects have been cancelled or torn down over the years?)

I got distracted this morning with doing some Analytics work on Atomic Insights, trying to figure out more about who reads this publication. If you have not tried Google Analytics and you have a web site or blog, you should. Fascinating and somewhat addicting to page through all of the different ways to look at…

A few weeks ago, there were a number of reactions to a recent front page article in Scientific American titled A Plan to Power 100 Percent of the Planet with Renewables. John Wheeler produced a This Week In Nuclear episode in response to that article that he called Un-Scientific American in which he expressed his…

About a week ago, I posted a link to a discussion about the world’s energy situation hosted by The Economist. One of the scheduled featured debaters was Joe Romm. I assumed that he would provide commentary that strongly discouraged the use of nuclear power – that is his normal position. I was wrong and apologize….

One of the common phrases that is repeated about our need to change our energy consumption habits is that “every little bit helps”. On the top of the list at about.com’s page titled Energy Saving: 13 Tips to Turn Your Cell Phone Green is advice to unplug phone chargers when not in use. That same…

The Nuclear Energy Institute, the American Nuclear Society and the North American Young Generation in Nuclear have been investing time and money into focused workforce development programs for several years. The people leading the effort are taking the action to ensure that there are educated and trained people who are ready to meet the challenge…

A friend sent me a link to an NY Times Green Inc. blog post titled The Coen Brothers Do Clean Coal with a new commercial from Reality.org. Since the clip is from YouTube, I figured there is no reason for them to have all of the fun. Let me know what you think: