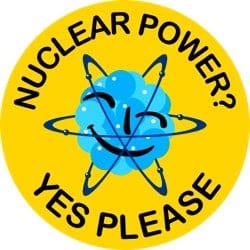 Arstechnica has a story titled Nuclear power? Yes please! inspired by a session titled Keeping the Lights on: The Revival of Nuclear Energy for Our Future held on February 14, 2009 at the American Association for the Advancement of Science annual meeting in Chicago. Apparently the writer has been mulling over the topics discussed during that session and realized the core of the message was that

Nuclear power is safe, affordable, and the waste problems are much more manageable than the public realizes.

It is always good to find others who are gradually learning the truth of that simple statement. As is often the case with Arstechnica, the comments following the article are often more valuable – and sometimes longer – than the original article itself. Of course, there are your typical anti’s who provide repeated links to poorly conducted “studies” that attempt to prove that low level radiation is far worse than anyone ever thought, even though it is it takes serious data manipulation to tease out the perceived harm, but the responses in favor of nuclear power are quite thoughtful.

I chuckled and shook my head at one comment by Metaphysical that might also amuse (or enrage) several regular Atomic Insights readers. Here is how he dispelled any rumors that he might know what he is talking about:

Well Amory Lovins, a man who I trust in knowing his electricity and oil (which are two separate things people), disagrees on the cost of nuclear vs. wind towards wind – although he does kind of carry a torch about the subject…

I guess most of you know by now that I would not trust Amory Lovins to install a light switch, much less to explain the difference between electrical power and oil heat and how they have no relationship to each other. After reading the story in Arstechnica, I was inspired to learn more about the AAAS session and did some drilling through their meeting web site.

(Emphasis in the original)

That is a good list and probably generated some useful discussion. In contrast, though I was not there and cannot say if the following abstract did the presentation justice, I have to express my disappointment at the American representative at the session. He is listed in the program as Mujid Kazimi, MIT, Cambridge, MA, and here is what his abstract has to say about his contribution to the session (remember the title of the overall session is Keeping the Lights on: The Revival of Nuclear Energy for Our Future).

Many innovative nuclear fuel cycle schemes are being considered by researchers and designers aiming at lowering the amount of High Level Waste generated per unit of electricity produced. These could be deployed to support the operation of current/future nuclear power plants in order to achieve a significant reduction in the amount of high-level radioactive waste requiring geologic disposal, to reduce significantly accumulated plutonium in civilian spent fuel, and to extract more useful energy from nuclear fuel. More generally, the sustainable development of nuclear energy is linked to the development of innovative fuel cycle technologies as well as reactor technologies. However, such a development will be threatened, unless the problem of declining number of university courses associated with it, and the declining interest among students for it, is addressed.

I have to remind myself that the session is part of a scientific gathering and that university professors often look at any issue through the lens of increasing student count and grant opportunities, but “lowering the amount of High Level Waste generated per unit of electricity” has only a remote relationship to “Keeping the Lights on”. It does nothing to address the reestablishment of the industrial base, explaining the value of nuclear generated electricity to a skeptical public, helping the public to understand the vast gulf between power reactor fuel and weapons materials, or helping them to understand that nuclear heat can be used in more innovative ways than just keeping the lights on.

Jacques Bouchard, Commissariat à l’Energie Atomique, France provided a much more inspired (and inspiring) abstract that reinforces my notion that the AAAS should be awarded a “needs improvement” grade with regard to its selection of speakers for America:

Today, there is a general feeling that nuclear energy has a real future. During the last few years, the results of numerous studies have been published, showing a high probability for the strong increase of nuclear energy demand during the first half of the century. World energy needs will increase drastically in the next decades. Use of fossil fuels should be limited for both economical and environmental reasons. Energy savings and larger recourse to renewable sources are necessary but not sufficient.
To limit the use of fossil fuel and the dangerous consequences of greenhouse effect, it will also be necessary to develop nuclear energy
However, the main issues that are of concern to the public in many countries relate to nuclear safety, long term waste management and proliferation risks.
Are we ready to face both a renaissance of nuclear energy as well as an actual booming of the demand? Nuclear industry offers third generation reactors which design relies on the large experience gained from light water reactors, all while bringing significant improvements. In addition, the worldwide nuclear research community has launched an innovative technology program aimed at developing Generation IV systems, allowing for a sustainable use of nuclear energy, i.e. saving of resources, minimizing waste and ensuring the best security. The achievements of Gen III reactor developments and the prospects of Gen IV technologies should bring good answers to these questions but we have still to convince the public and show the reality of the achievements and the realism of such prospects. Through experiences from US, Chinese and European cases, we shall examine the way chosen to address the challenges for the sustainable development of nuclear energy on a worldwide scale.
(Emphasis added)I really need to figure out a way to attend more of these kinds of sessions where thought leaders gather. It is one way to seed the conversation so that new ideas can be spread and debated and so that we can finally – after at least 15 years of talking about a “nuclear renaissance” – begin implementing all of the actions needed to ensure that the renaissance provides near term and lasting benefits to mankind.

I am losing any hesitation in saying that I am a fission fan, an atomic obsessive, and even an atomic activist. We have a great message of hope and a real opportunity to make the world a better place to live, despite the efforts of people like Metaphysical, Amory Lovins and Tom Cockrane.

During the past few weeks, there has been a flurry of writing, revising and reviewing among a senior and accomplished group of people who believe that the United States needs all of the benefits that rapidly growing use of nuclear energy can provide. The final product of the effort is a letter to Dr. John…

Sometimes the web and its infrastructure provide some interesting surprises. As I have mentioned several times in this blog, one of my many news sources is a daily email from Google Alerts that provides links to every article that it has found in the past 24 hours with the word “Unistar”. That unique search term…

On August 21, 2009, Susan McGinnis of Clean Skies News invited me to come to the company’s downtown Washington studio for an interview about nuclear energy. I enjoyed the opportunity to converse with some of the network’s reporters – my car picked me up a few minutes earlier than absolutely needed – and then to…

China has announced the start of construction for 6 new nuclear reactors on a site in Yangjiang City, Guangdong province. Each plant will produce 1,000 MW of electrical power (1 GWe). The total cost for the 6 reactor project is expected to be $10.2 billion. The announcement, when added to others means that China plans…

My old friend Jeremy Whitlock, who has been publishing the Candian Nuclear FAQ since April 1996, published a very amusing article titled “Refurbish thyself” with slightly disguised references to some prominent anti-nuclear leaders and their groups. Worth visiting, especially if you are a nuke that likes recognizing allusions are not necessarily obvious to outsiders.

The US Nuclear Regulatory Commission has posted a Policy Issue Information document dated March 28, 2010 titled POTENTIAL POLICY, LICENSING, AND KEY TECHNICAL ISSUES FOR SMALL MODULAR NUCLEAR REACTOR DESIGNS. The document number is SECY-10-0034. It is a fairly typical redundant, bureaucratically phrased work, but it contains a number of important statements, planned processes, and…