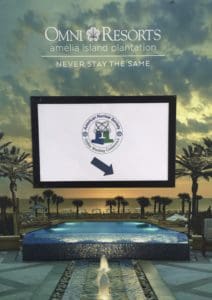 With generous support from several Atomic Insights readers, I was able to attend the welcome reception and the first day of the annual Utility Working Conferenc organized by the American Nuclear Society (ANS). This year’s conference title was The Nuclear Option – Clean, Safe, Reliable & Affordable.

This event has been a fixture in the August calendar of nuclear utility company leadership, nuclear plant operators and maintainers, and nuclear equipment and service suppliers for the past quarter of a century. There are usually invited speakers from government agencies that impact the main attendee groups, including the Nuclear Regulatory Commission and the Department of Energy.

The conference is a learning opportunity. People develop their contact networks, candidly share both successes and challenges, find out about newly developed problem solutions, and see some demonstrations or literature about new developments in technology. 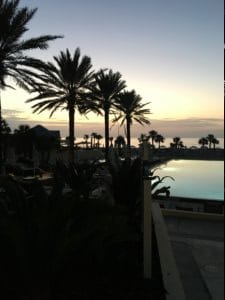 It’s also a family affair that has almost always been held at the Amelia Island Resort, which is on a barrier island off of the northeast coast of Florida. There are well-maintained beaches, expansive swimming pools, ocean view rooms, golfing, tennis, bike paths, and plenty of other reasons why families willingly attend while mom, dad, or both attend the sessions that help them in their professional lives.

The welcome reception is a casual affair where even some of the most sartorially-minded participants have been known to wear “resort-wear” consisting of untucked shirts, shorts, and boat shoes. Children and spouses attend for the food and the creative swag at the vendor booths.

ANS and the industry leaders have been making a serious effort to encourage companies to send a wide range of attendees, including as many of their younger employees as possible. It’s a good way to reward exceptional performers with a solid return to the company in terms of valuable knowledge and personal contacts.

Concern for the future

The event started less than a week after the sudden announcement from Santee Cooper and SCE&G that they had decided to immmediately halt construction on V.C. Summer 2 & 3. The utility host for the conference was Southern Company, the parent of Georgia Power, the lead owner of the Vogtle 3 & 4 construction project.

Though construction work at the Vogtle project is continuing, everyone at the conference understood that the owners have not yet made a final determination about whether or not they will be able to complete the project in the wake of the Westinghouse bankruptcy filing.

There was a different atmosphere and attitude among conference participants in comparison to UWC 2010, the last time I attended a UWC at Amelia Island. That meeting was in the pre-Fukushima days when memories of high and rising natural gas prices were only two years old. There was still a lot of talk about a Nuclear Renaissance.

I was introduced to several people who would soon become colleagues on the B&W mPower project for the next three years.

There was also some muted sadness about the fact that the 2011 UWC was being planned for a different resort in Hollywood, FL.

The attendance at that 2010 meeting was so large that it strained capacity limits at Amelia Island. The plenary sessions had to be moved to a huge, air-conditioned tent because the largest conference room couldn’t hold enough people.

The event returned to Amelia Island in 2014 after three years in Hollywood. I’m sure there were numerous regular attendees who were pleased with a return to the traditional venue even if not happy about the underlying reasons that the larger conference spaces were no longer necessary.

Following the welcome reception, I had the cultural experience of watching an episode of Game of Thrones in a hotel room full of young nuclear professionals. I was amused by the side commentary, near dorm room atmosphere and by the frustration expressed by some of the attendees with the lack of an up-to-date HD TV with better than 720p resolution or at least an HDMI connection.

I also learned that there are some utility core designers that have developed considerable dexterity with fidget spinners during lulls between outages.

After taking my leave from the younger crowd I engaged in an interesting poolside discussion with a member of the Entergy leadership team who tried to explain why the company had decided to exit its merchant nuclear generating plant business in the Northeast. We agreed to disagree on many of the circumstances, but agreed that part of the problem was cultural. The electricity business and political climate in Louisiana is quite different from the same business and its political climate in the Northeast.

The opening plenary session was organized on the general theme of “The Case for Nuclear in the Nation and the States.” It might seem a bit odd to think that such a session would be necessary at a meeting of the American Nuclear Society, but even choirs needs inspirational messages from skilled preachers now and again.

In fact, successful evangelists understand that it is never a waste of time to preach to the converted or to fire up the choir. There is no better way to spread whatever message it is that the evangelist wants to be widely adopted than to create committed, excited, and empowered messengers.

Donald Hoffman, the President and CEO of Excel Services Corp., was the session organizer and moderator. He has been traveling and working diligently to make the case for supporting nuclear energy in numerous state capitals and on his home turf if the region that some call the DMV (District of Columbia, Maryland, and Virginia).

He planned the speakers to make the case for nuclear from a range of perspectives and angles.

Robert (Bob) Coward is the current president of the ANS and the principal officer of MPR, a well respected engineering and technical services company originally founded by three escapees from Rickover’s Naval Reactors organization. He spoke about his firm belief in the importance of nuclear energy and in reliable generation to serve as the foundation of an always on and available power grid.

He provided a first hand anecdote about grid level storage; MPR has provided engineering support services to PG&E for a project to build what is currently the world’s largest grid-connected storage battery. That battery, installed as part of an efffort to ensure grid stability in Southern California in the wake of the one-two punch of closing San Onofre followed by the Aliso Canyon natural gas storage facility leak, can store 100 MW-hrs of electricity.

When running, San Onofre delivered that amount of electricity to the grid every 3 minutes.

Coward asked the attendees to remain optimistic, to learn as much as possible about the unique capabilities of nuclear in comparison with alternatives, and to share nuclear knowledge more widely.

Steve Kuczynski, the Chairman, President and CEO of Southern Nuclear explained once again the reasons that Southern is so strongly supportive of an “all of the above” energy portfolio that includes a strong nuclear component. He described how Southern has maintained an R & D arm for more than 40 years and continues its leading work with advanced technology development including partnering with the DOE, small companies, universities and national labs on several advanced reactor development projects.

Then he turned to the topic that everyone in the room was waiting for, the Plant Vogtle expansion project. He spoke about the numerous challenges associated with restarting a nuclear plant construction industry, including rebuilding a hollowed out supply chain. He talked about disappointment with the failure of the prime contractor.

He described the work that has been done in the past several months to improve construction performance and worker productivity while also working diligently to create solid project schedules and estimates of cost to complete the project. He explained that Southern Company, through its Georgia Power subsidiary, is only a 45% owner and has three development partners whose concurrence will be required with any decision about the projet’s future.

He expressed his deep personal interest in moving forward and also stated that his company thinks it is probably the right direction. However, negotiations continue and the final decision will require supportive decisions by the Public Service Commission. In other words, stay tuned.

R. Shane Johnson is the Deputy Assistant Secretary in the Office of Nuclear Energy for the Department of Energy (DOE). He came bearing the message that the Trump Administration wants to follow where the industry leads. It believes that the government has severely hindered the development of nuclear energy and that it wants to get out of the way.

To do that, however, he emphasized the fact that the industry has to identify and prioritize the actions that the government should take.

President Trump: “We will begin to revive and expand our nuclear energy sector…which produces clean, renewable, and emissions-free energy. A complete review of U.S. nuclear energy policy will help us find new ways to revitalize this crucial energy resource.”

Sec. Perry: “If you really care about this environment that we live in…then you need to be a supporter of this [nuclear energy] amazingly clean, resilient, safe, reliable source of energy.”

He then displayed the below slide that illustrates various future paths that are possible for the US nuclear industry. 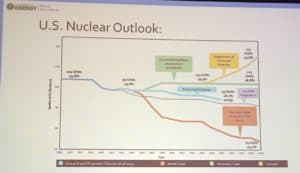 What path will the US take for nuclear energy?

Aside:I’m quite partial to the upper line and its associated notes.

The DOE has moved to revise its definition of advanced reactors to include any reactors that have not yet been commercially deployed. That change was aimed at reducing infighting and fratricide so that all of the people seeking to improve on our existing technology will see that they share at least some common goals.

Johnson introduced a new Funding Opportunity Announcement (FOA) that has not yet been finalized or issued. It will offer several tiers of funding or in-kind support from national labs and the NRC. As the government’s expenditures increase, the portion of funds that will be expected to come from the private sector will also increase.

The FOA will have much broader technology boundaries than those that defined the limits for such programs as the small, light water reactor licensing assistance effort.

John Rosales, a commissioner on the Illinois Commerce Committee, described the political effforts that led to the passage of the Future Energy Jobs bill that provides sustaining support for three nuclear units – the Clinton plant and the two unit Quad Cities station.

He emphasized that the bill could not have been passed without expanding its scope to include substantial support to wind and solar energy development.

I thought about his talk during a later conversation with a Clinton plant employee. He told me that one of the real challenges for his plant is the fact that it is in an area of the grid where it shares its transmission lines with a huge number of wind turbines. When the wind is blowing strongly, the electricity from those machines often fills the transmission capacity, requiring Clinton to reduce its output and its sales revenue.

We agreed that it was a bit unfair that nuclear plant projects have always been required to develop sufficient transmission capacity and to include the costs of that transmission infrastructure as part of the project cost, but that wind developers are often allowed to ride on the established grid, even to the point of displacing other generating sources whose power is just as emission free.

Following the plenary sessions, I attended two very interesting breakout sessions about advanced reactors, but I think it might be appropriate to cover those in separate posts.