The above footage was taken during the annual protest carnival that happens during the first weekend in November when Germany accepts a shipment of nuclear waste back from the recycling plants in France. The waste is in the form of stable glass logs that will be stored in a stable salt formation near Gorleben, Germany.

Notice the scene of singing and clapping at the end of the video – these people are having some fun protesting a visible symbol of nuclear energy, even though they probably have little understanding of the real issues involved in producing reliable power. Sometimes I wonder why the waste canisters could not be safely transported in cars that look like any one of the thousands of coal cars that must move around Germany on a daily basis. One way to avoid the confrontation would be to make the shipments more routine.

Yesterday, I watched a train pass by a museum in Roanoke, VA. The train consisted of 170 nearly identical empty coal cars heading west; I know that number because I was interested enough to count the cars. Just a couple of hours later in the day, I saw another almost identical train pass by, but I did not stop to count those cars. Each one of the cars in those routine trains will load up and turn around to carry 100 tons of coal to be burned in power plants. When as that fuel burns, it will dump between 240 and 380 tons of CO2 and perhaps 5 to 20 tons of ash into our shared atmosphere.

However, there is never a protest against those trains. People see them as a necessary part of the infrastructure that enables them to turn on a light switch or a television set. Some of the people in the area know that their livelihoods depend either directly or indirectly on allowing those trains to move. Maybe the nuclear industry needs to hire some spokesmen from the coal industry – people who are willing to both share useful information about their product and to fight hard if crossed by people who just do not understand how the world goes around.

Update: (Posted at 0551 on November 9, 2010) The antics of the anti’s have been recognized as eminently newsworthy by the New York Times. Check out this screen capture of today’s edition and notice the placement of the story and photo. Front and center! 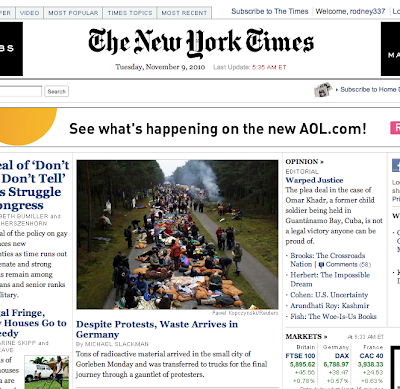