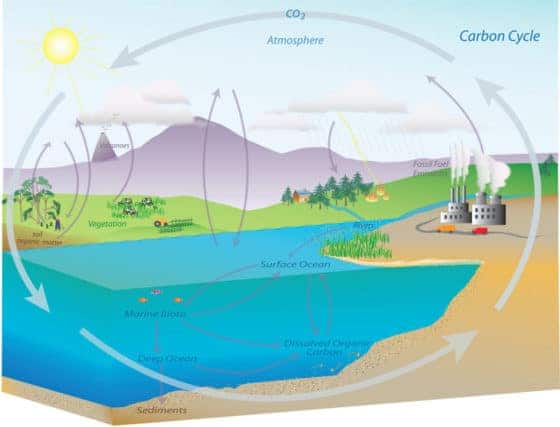 Human activity has created a carbon dioxide problem. Dr. Frank Shu and his team have a partial solution called “supertorrefaction” that is worth sharing.

When faced with problems, rather than panic or fret, people with an engineering mindset prefer finding solutions using the best available tools. The more creative members of that admirable tribe create new tools by combining existing materials and techniques in unique ways.

The position this blog takes on carbon dioxide is that humans, pursuing their natural desire to improve their own lives and the areas where they and their loved ones live and work, have altered the natural carbon cycle.

Our use of hydrocarbon fuels and our choices for land use — including urbanization, forestry and agriculture — have turned what would be a gentle sine wave with annual fluctuation about a nearly horizontal line into a gentle sine wave with annual fluctuations about a line with an increasing slope as shown below. That doesn’t mean that using hydrocarbons or altering the landscape is bad or deserves demonization, it just means that there are consequences associated with our actions.

That graph offers both reason for concern and reason to be optimistic about finding solutions. Though many of the people who are motivated to press for aggressive actions portray the rise in global CO2 concentrations as steady and hard to reverse, the graph shows that nature lowers CO2 concentrations at a pretty rapid pace every year before reversing course and allowing them to rise by a slightly larger amount.

Nature achieves that rapid annual CO2 reduction with the help of an uncountable number of small transactions where atmospheric CO2 is absorbed by rocks or converted into biological material.

With the help of creative human effort, some of those natural transactions can be altered or accelerated to achieve a better carbon cycle balance.

Many schemes proposed for carbon capture and sequestration (CCS) operate on a massive scale. The visions are so big that testing them involves multi-billion dollar investments and project timelines that run into decades. As a result, there are only a tiny number of demonstrations and none of them provide a full system proof that CO2 can ever be economically separated, captured and permanently stored underground.

Frank Shu is a world-renowned astrophysicist who recently turned his attention to the tightly linked challenge of producing plenty of energy for human society while also actively reducing — and eventually controlling — atmospheric CO2 concentrations. Dr. Shu is convinced that if humans can destabilize the climate by dumping CO2 into the atmosphere, we can also find and use ways to reverse the instability we’ve added by actively removing CO2 from the atmosphere.

Shu knows that a large portion of human-produced CO2 comes out of hundreds of millions, if not billions, of small combustion units. The overall rate of production is massive. He has determined that removal might be most effective if the necessary systems can be almost equally well-distributed, with massive numbers of small-scale operations.

Shu’s invention is a patented process that he calls “supertorrefaction.” It is a substantial improvement on a long established process known as torrefaction, which is a method of creating a carbon-rich material — often called char — by heating biomass to a temperature in the range of 200 ℃ to 280 ℃ in the absence of oxygen. The traditional torrefaction processes burn some of the biomass to create the heat. They use the resulting combustion gasses as the heat transfer medium. It can take several days to complete the conversion of biomass into char.

Note: You probably recognize that torrefaction is a technical-sounding name for the ancient process of producing charcoal.

Supertorrefaction (STR) submerges wood chips or other forms of shredded biomass into a bath of molten salts — NaOAc/KOAc for example — that is held at an average temperature of 450 ℃.

Direct contact in a fluid that has a volumetric heat transfer capacity that is about 2000 times that of combustion gasses at a substantially higher temperature turns the several-day-process of torrefaction into a 10 minute per batch process. Using multiple chemical reactors each with porous baskets to hold the biomass and a conveyor system, the STR process can be turned into a continuous process with a steady throughput.

Shu established a company called Astron Solutions Corporation (ASC) and has worked with a team of researchers from the University of California and Academia Sinica (Taiwan) to test and create pilot-scale equipment demonstrating the process. The machinery is designed to be transportable by truck to places where there are abundant resources of biomass that is not useful for other purposes.

One of the biggest disadvantages of biomass as a fuel source is that it is not very energy dense because it contains water and a number of non-combustible components. That makes it bulky and difficult to transport; it is cheaper to move the STR machinery to the source of material than to gather the material and move it to a much larger, centralized processing facility.

In his ultimate clean energy vision (pg 19-23) the heat required to melt the salt and maintain it at operating temperature will be provided by molten salt reactors, either an advanced, two fluid breeder or a simplified burner like those being developed by Terrestrial Energy and ThorCon.

The carbon-rich char can be used for soil improvement, raw material for graphite production or even carbon for carbon fiber materials like those used in fuel-efficient aircraft and tennis rackets. The carbon content of the material would be sequestered as a solid in processes that are an acceleration of the natural production of carbon reservoirs.

Shu and his team recognize that major technological developments do not reach their ultimate implementation in a huge leap, but by taking planned, intermediate steps that move in the right direction. Those intermediate steps are generally chosen to prove important aspects of the eventual implementation, but they can best be funded and achieved if they also provide immediate value by solving an existing problem even without the availability of all of the ultimate system components.

It will be several years before there are any available molten salt reactors heat sources, but there is available biomass that needs near-term disposal. Shu’s team has been experimenting and refining their process equipment using Leucaena as a raw material source. Leucaena is a woody, nitrogen-fixing bush that is native to Mexico, but is an invasive species that has overrun areas of southeast Asia in a manner similar to the way that kudzu has smothered parts of the US Southeast.

Shu and his team have also developed proposals to use their STR machinery to address the high fire hazard areas where pine forests have been decimated by bark beetle infestations. The dead trees are unusable for lumber, but if not addressed they make exceptional wild fire fuel. The State of California has an immediate need for solutions and issued a Grant Funding Opportunity (GFO-13-325). ASC has responded with a description of how their system would mitigate the problem.

In early implementations of the STR process — and perhaps in many remote areas even after the process is mature — the biochar will be pulverized and oxidized as a fuel along with the produced syngas. The released heat will maintain the salt temperature, but since the heat content in the biomass is more than sufficient to keep the salt hot, excess heat is available.

Using cooling tubes, the excess heat in the chemical reactor will be removed and used to produce community-scale electricity, possibly using a supercritical CO2 turbine to drive a generator. The sCO2 development has momentum because it has potential application as a compact, highly efficient heat engine for solar thermal, advanced fossil fuel, nuclear fission and biomass.

This level of implementation is not the place where Shu wants to stop because it doesn’t achieve the long-term removal of atmospheric CO2 that he believes is needed in the near future. However, it will allow his engineers and operators to scale their machinery, their control systems and their material handling concepts.

At the right cost, STR systems can be widely deployed, giving people a tool that will use accelerated natural processes to turn plant matter — wood, crop waste, hay, invasive species — into a permanent store of useful carbon that is kept out of the atmosphere.

A version of the above was first published on Forbes.com under the headline of Slowing Climate Change By Producing Modern Charcoal. It is reposted here with permission.

By NNadir I trust — and I hope I am justified in this — that no one wants a nuclear war. I know I don’t. We already have a set of environmental problems that are worse than a limited nuclear war, and may be facing an environmental crisis that might be as dire as a…