An article titled Alstom opens largest rotor balancing facility in Tennessee appealed to both my inner manufacturing geek and my patriotism. It described, in glowing terms, a tour of a factory that recently opened on the Tennessee river in Chattanooga, Tennessee. The facility includes an impressive rotor balancing tunnel that allows the manufacturer to spin a massive machine designed to produce as much as 1800 MW of electricity inside a temperature controlled vacuum at 4500 RPM. During the spinning process, sensors provide the information necessary to finely machine the large turbine rotors so that they function with a minimum amount friction and noise. 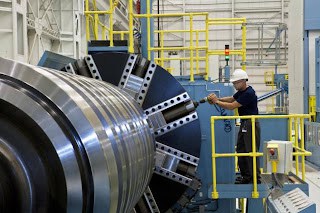 Balancing is an essential step in the manufacturing process, but the rest of the facility is equally impressive, with 350,000 square feet of space and a river dock that can allow smooth loading of 1000 ton pieces of machinery onto barges. Here is a quote from the article:

No wonder, Alstom Power president Philippe Joubert called the factory “an alliance between beauty and power… Our new Chattanooga factory dramatically enhances Alstom’s ability to build and retrofit power generation equipment for customers in North America and beyond.”

With a nuclear renaissance on the cards in the U.S. and President Barack Obama insisting that “the time to embrace a clean energy future is now,” Alstom foresees a big market for nuclear steam turbines in the coming years. In 2010, the installed nuclear power capacity from 104 operating reactors in the U.S. is 101.3 GWe, accounting for 19 per cent of the total electricity generated in the U.S.

There were a few aspects of the article that did cause me to pause for contemplation. First of all, Alsthom, the factory owner is a French based manufacturer. That is not a real problem for me, but I am old enough to remember a time when manufacturing these kinds of large turbines was a US dominated speciality. It is great to see that the factory is in the US and will be employing US workers and engineers, but it is kind of disturbing to recognize that American business leaders may need a stimulus from abroad to kindle their interest in large scale manufacturing here in the US instead of off shore.

I also spent some time contrasting the report quoted above – published by an Indian news organization called Hindu.com – with a representative of the kind of report on the factory opening that I found in US based publications titled Alstom Begins Operations At World Class Facility In City. First of all there is nothing actually wrong with this report, but it is subtitled Site Of Former Combustion Engineering To Be LEED Gold Certified as if the most important aspect of the opening of a new manufacturing facility is its energy efficiency. The reporter for the Chattanoogan focused on the job creation, economic development, and political aspects of the facility, but provided few details about the impressive technology. The article did not include a photo to illustrate the impressive products of the facility or show the workers employing their skills.

Is this just an example of how journalists in the US feel about bending metal and making things. Is it because the advertiser supported media in the US has been taught to look down on factory workers instead of celebrating their skills and craftsmanship?

Anyway, I now have a new destination desire – I want to visit Chattanooga and tour the Alsthom turbine facility. If any of you know someone who can get me an invitation for such a visit, please contact me.