Yesterday morning I noticed a scary story on the front page of the Baltimore Sun. David Murrin, and Marcellous Butler are working to build a wind farm with 10 large turbines on Greenbury Point, just upwind from the Annapolis harbor. Them’s fightin’ words, as they used to say in my Dad’s part of the country (southern Georgia).

Some of my very best memories over a lot of years originated in what would be the wind shadow of those turbines while serving my country as a member of the Naval Academy sailing team and as an instructor for the off-shore sail training program that we used to call Command Seamanship Training Squadron (CSTS). For those of you who have not had the pleasure and privilege of sailing in the mouth of the Severn River just to the east of Annapolis, you just do not know what you are missing. On a nice, breezy Sunday afternoon you can look out from the city dock or the Naval Academy sea wall and almost believe that you can walk across the Bay on the boats. The below photo was taken from Greenbury Point very early one morning, so the harbor is pretty empty. 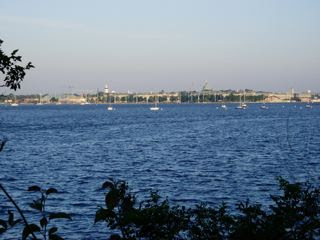 Some of you might not understand what a wind shadow is, but please recognize that the immutable physical law of conservation of energy applies. Energy is neither created nor destroyed, it can be converted from one form to another. Turbines that have been erected to capture wind energy take energy in the form of flowing wind and turn it into electricity. That means that the wind downstream of a turbine no longer flows with the same direction or velocity as it did before it hit the turbine. That effect, generally speaking, affects a distance that is about 3-5 times as long as the wind turbine blades.

I cannot help but believe that anyone who would favor erecting wind turbines on the point of land on the north side of the Annapolis harbor must be a stink boater. (I also got that clue from the fact that one of the project developers is introduced as being a merchant mariner and the other is a marina developer.) I can think of several other very good reasons for taking a very slow and considered approach before approving any such project.

Here is a photo of the graveled path showing the bottom of one of the three radio towers that currently occupy the site. (There used to be more towers, but they were taken down after the communications station was decommissioned as part of a Base Realignment and Closure (BRAC) action.) 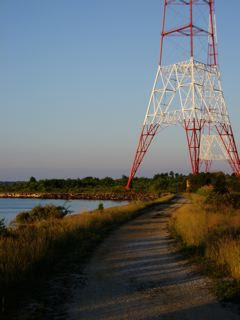 Bottom line – the project is an economically risky endeavor for America’s Sailing Capital and it is also an environmentally risky one for a truly unique open point of land on the Chesapeake Bay.