Tony Klein, a former Vermont legislator who played an important role in Vermont energy law creation during the last decade, recently gave a fascinating talk at the Osher Lifelong Learning Institute at the University of Vermont.

Fortunately for those of us with a deep interest in energy politics, the talk was competently recorded for posterity and world-wide distribution. Audience interest and participation in his talk was stimulated by an unplanned coincidence; he spoke about a week after Vermont, like most of New England, suffered from widely distributed power outages.

Klein’s talk lasts about an hour, but it will be time well-invested for those seeking to gain insights into how renewable energy advocates carried the water for Green Mountain Power in its quest to dominate Vermont’s electricity supply system.

Klein began his talk by describing his entry into the energy production conversation as an activist in the antinuclear movement and his personal development as a member of the ‘back to the land” movement.

Aside: That migration of liberal utopians to Vermont made a big impact starting in the late 1960s and 1970s with continuing influence ever since.

There is a reasonable chance that you will watch White Christmas in the near future. There is a revealing exchange about Vermont politics in that 1954 film.

Bing Crosby: “So tell me, what do you think would be a novelty up here in Vermont?”

Danny Kaye: “Who knows, maybe we can dig up a Democrat.”

It’s probably an understatement to note that “back to the land” movement helped to alter Vermont’s political leanings. End Aside.

Klein describes how he moved from his activist roots and began working in the energy industry as a marketer for Blue Flame Gas. One of his tasks there was to develop a program to convince customers to convert from electric water heaters to natural gas water heaters.

The company wanted to reduce the sharp swings in seasonal demand. He suggested a program to his bosses that would convert customers from electric water heaters to propane or gas water heaters. His company worked with electric utility companies that were interested in reducing electricity sales to provide new hydrocarbon-burning water heaters with financing repaid via electricity bills.

When he left that job he formed a lobbying group that represented independent power producers, Renewable Energy Vermont and Efficiency Vermont.

In 2002, he took advantage of an open seat created by redistricting and was elected to serve in the state legislature, representing east Montpelier and Middlesex. He held his seat for seven 2-year terms.

He began serving on the House Natural Resources and Energy Committee during his second term and was the chairman of that Committee for his final four terms. He humbly called himself a witness to Vermont’s energy system transformation. A more accurate term might be be “leading actor” or “player.”

At least three times during the talk, Tony claims that he and his compatriots believed that they were “angels, doing God’s work.” He expresses a fair amount of contrition for leading a energy supply revolution that seems to be failing with uncomfortable consequences.

He explains how he decided not to run for another term because he just couldn’t deal with all of the negativity and finger-pointing that was growing in intensity as the results of his numerous legislative efforts became increasingly apparent.

Just before the 19 minute time mark, he mentions that the room would not have been large enough to contain the audience if he he was still serving as Chair of the House Natural Resources and Energy Committee. He noted that there would be a “whole lot of people who didn’t like me and would accuse me of a lot of different things.”

During the period from 1998 – 2014, the Vermont legislature passed 18 separate acts that Klein describes as having had a major impact on its energy supply choices. He says, “they were all passed unanimously – except for 1, 2, 3 – 6 of them.”

Warning – please do not take a sip of hot coffee around the 28 minute mark. Right after that Klein claims that Vermont imported almost all of its electrical power in the 1990s.

Those of us who know where to find the data (p. 273) could point out to Mr. Klein that Vermont was a net exporter of electricity in 1998, with the vast majority of the electricity produced inside the state borders coming from a single nuclear power plant – Vermont Yankee.

As a direct result of that well-run, virtually emission-free plant, Vermont’s electricity supply was the cleanest in the nation with the following ranks among states (including D.C.) on reported polluting gases.

Klein also mentions that Vermont experienced an ice storm in the late 1990s that brought down the transmission line from Hydro Quebec. It took 5-6 weeks for that power line to be restored. During the outage, utilities in the state had to purchase their power on the open market and spent enough to “almost drive them into bankruptcy.”

The state is no less dependent today on power imported from Hydro Quebec than it was then. Some advocate even more imports via transmission lines from that distant power source.

That summarizes the first 30 minutes of the video. I hope it has whetted your appetite enough to encourage you to watch for yourself to see a master salesman explain away his contributions to the creation of Vermont’s fragile power system.

When Vermont Yankee closed at the end of 2014, it was largely with the understanding that renewable energy sources were going to take its place. According to data supplied by regional grid operator ISO New England, such has not been the case.

Over the past two years, about 5 percent of New England’s electric use swapped from nuclear to natural gas. While nuclear production dropped from 34 percent to 29.5 percent, natural gas rose from 43.1 percent to 48.6 percent. The data from ISO New England’s Daily Generation by Fuel Type 2014 and 2015 was analyzed by the Institute for Energy Research, a group that tracks government regulation of global energy markets.

“There’s a solid connection between the increased use of natural gas for generation in New England and the shutdown of Vermont Yankee,” she said. “There’s also been coal-fired generation that’s been shut down, and natural gas is replacing it. It’s the same trend all around the country.”

According to the U.S. Energy Information Agency for Vermont, in 2013 at least 9.7 trillion BTUs, or about 8 percent of all consumed energy, came from natural gas.

Going forward, natural gas production could be coming to Vermont in a big way. Last year, the Vernon Planning Commission held a public meeting verifying they’ve been in contact with a developer about building a $750 million gas plant in town. That facility would link up to a not-yet-approved Kinder Morgan gas pipeline planned for southern New England.

“The contribution from solar and wind wouldn’t be significant enough to make up for the generation of Vermont Yankee,” Hallquist said. “In fact, there’s no way. … You would have to build like 1,800,000 kilowatts of wind.”

According to Hallquist, wind and solar have “low capacity factors” because they are dependent on the weather. The capacity factor is the average power generated divided by its peak capacity.

Opposition to Vermont Yankee gained momentum in 2010, when Gov. Peter Shumlin, then Senate president pro tempore, led an effort to prevent the Public Service Board from ruling on Vermont Yankee’s application to continue operation. While plant owner Louisiana-based Entergy already had federal approval to continue operation, the company decided to close Yankee, in part due to hostile political winds.

“My beef is, Vermont Yankee said we’ll sell you our power, 600 megawatts or most of the state’s needs at peak, if not all then most of the time, for 4 cents a kilowatt hour,” he said. “Dirt cheap, and they basically told the utilities don’t buy their power, don’t sign an agreement, don’t mess with them, they are out of here.”

According to Sullivan, natural gas for heating takes priority during Vermont’s many cold spells. This causes the otherwise very cheap energy — around 4 cents per kilowatt hour — to spike.

Hallquist said the proposed Kinder Morgan pipeline would boost capacity during cold spells, when everyone uses gas for heat.

Green Mountain Power spokesperson Dorothy Schnure said the Colchester-based utility’s power purchase contracts have been lengthy enough to be unaffected by the Yankee’s closure. However, Schnure and Sullivan both said that when their organizations buy market power, a portion of that is natural gas.

Beth Parent, communications manager for Vermont Gas Systems, says natural gas offers heating for over 50,000 families, businesses and institutions in Franklin and Chittenden Counties. She added that 14 percent of Vermont families and businesses use natural gas as a primary heating source.

The above was originally published on Vermont Watchdog as Natural gas replacing Vermont Yankee’s energy. Reprinted in full with permission.

Note from Atomic Insights: Green Mountain Power and Vermont Gas Systems are both units of Gaz Metro, a 50 year-old company headquartered in Montreal, CA with a worldwide portfolio of companies in the energy industry, including a large network of natural gas pipelines and natural gas production facilities.

Spokespeople from both companies have interests that are not often disclosed.

By Guy Page By 2020, the spent fuel left over from all 42 years of Vermont Yankee’s operation is scheduled to be stored in huge steel “dry casks” on pads at the plant site in Vernon. Just how strong and reliable are Vermont Yankee’s “dry cask” spent nuclear fuel containers? Consider the following dry cask […] 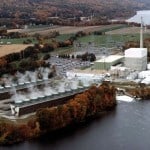 One of the well known techniques for minimizing the impact of an important report whose news some people don’t want to hear is to hold it for release until late Friday evening. That way, conventional journalists will not pay much attention until Monday morning and there will be some amount of decay in interest level […]

On October 20, IBM announced that it was spinning off its chip division by paying GlobalFoundries $1.5 billion. GlobalFoundaries appears to have won the deal with its geographic position of owning fabrication facilities in New York as well as in Germany and Malaysia. The move didn’t surprise many, as there have been rumors that IBM […]

Last night, CNN Presents aired a completely one sided and inaccurate portrayal of the Vermont Yankee nuclear power plant. It extensively quoted both Arnie Gundersen and Bernie Sanders and included a staged interview that made the Nuclear Regulatory Commission look both incompetent and unresponsive. That episode is scheduled to be repeated tonight. Here is a […]