I learned a lot time ago that it can be difficult, but not impossible to change the course of a very large vessel that has momentum going in a particular direction. Even when someone determines the necessity of a course change, the safe rate of change for the turn will be dependent upon the speed of travel. If the person on the helm wants to allow his passengers to maintain their balance, he will have to be judicious in the use of rudder orders so that the turn can be made gradually. 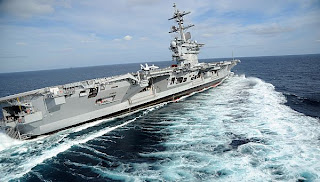 If done correctly, the turn can be almost imperceptible to the people on board. In order to make a smooth turn at high speed, the people who have determined that the turn is necessary have to pick a spot where there is sufficient space in which to complete the turn without colliding with other ships or with underwater hazards. The people who decide how to maneuver large vessels often put themselves into protected control rooms so that their actions do not get a lot of interference or distractions from people who do not have the full picture of the overall situation.

It is with that knowledge that I am a bit less worried than some of my colleagues or even some of my regular readers and Atomic Insights contributors about the direction that America is heading with regard to effectively using nuclear energy as a primary tool in the war against pollution, poverty, and partisan politics.

A couple of days ago, I found some important words from the man who has been assigned part of the task of helping to make a big turn in direction. Those words were in a publication that would have been relatively inaccessible and probably overlooked in a less connected time in our history. You can find Chu’s comments on the web site of the Lynchburg (VA) News and Advance at Virginia to receive federal funds for energy projects. Here is what Steven Chu told some people in Virginia when the Department of Energy announced some relatively minor federal block grants for energy projects (totaling just $16.1 million).

“Virginia is a perfect example of having real economic opportunities in clean energy,” Chu said. “The University of Virginia and Virginia Tech are at the forefront of clean-energy engineering,” he said.

In addition, “Virginia is a national leader in nuclear power,” and one-third of the state’s electrical energy comes from nuclear power, he said.

“We are eager to restart the nuclear program in the United States and we look forward to Virginia being part of that,” Chu said.

“We are in the final negotiations” for the federal government’s $18.5 billion in loan guarantees for the first utility companies that build new reactors, Chu said, “and I would personally like to see that loan guarantee program extended or renewed with additional money.”
(Emphasis added.)

It is certainly possible to be impatient about the length of time that it has taken to award loan guarantees. It can also be a bit discouraging to think about the amount of money now available from the federal government for nuclear energy projects compared to the amount given for home improvements, solar panels and wind turbines. That can be especially true if you happen to think that direct federal money is the prime enabler for nuclear energy deployment.

However, it is hard not to be encouraged by those words, especially when they come from the United States Secretary of Energy. I am even more encouraged because our current Secretary of Energy has been clearly positioned as a VERY smart scientist who has earned a lot of credibility in many different energy application fields. If you have been paying attention to the debate on climate change and global CO2 emissions, you should have heard quite clearly that the people who favor focused actions rely heavily on an argument that it is the science that is showing us the importance of acting. The advocates of action take great pains to establish and reinforce the credibility of the people presenting the evidence.

Now we have one of the few Nobel Prize-winning physicists that the general public can name stating categorically that “we” (the administration of which he is a part) “are eager to restart the nuclear program in the United States.” When talking about the more politically challenging action of providing access to more money requiring an act of Congress, he changes the pronoun from “we” to “I” and emphasizes that it is his personal opinion. There is a good political reason for that change in language – many people who philosophically favor the use of the best tools available for any particular challenge have a logical problem with calling a tool “the best” when the vendor of that tool has his hand out for a taxpayer subsidy to improve the tool or make it competitive in the market.

If the administration is genuinely trying to build a large enough coalition to approve a treaty out of Copenhagen (which takes 67 votes in the Senate) it is going to have to build a big tent that will allow free market advocates to comfortably associate with people who believe that unrestricted disposition of fossil fuel waste in our shared atmosphere is a terrible idea. The tent is also going to have to be large enough to include strong nuclear energy advocates who know that their technology has superior characteristics. Those nuclear energy advocates are going to have to be comfortable with knowing that they will not be getting much in the way of direct monetary support from their competitors who pay a lot of taxes, a LOT of lobbyists, a lot of salaries and who have been making political contributions for many decades.

In my not so humble opinion, that is okay, as long as we get steady “bully pulpit” support and some no cost barrier removal that will reduce the cost and time that it takes to deploy productive systems that can make a real difference in emissions levels. (When it comes to a rational evaluation of the competitive characteristics of nuclear energy versus any other alternative, I am constantly reminded of one of my Dad’s favorite country songs “It’s Hard to be Humble” by Mac Davis. That song starts with the following verse:

“O lord, it’s hard to be humble when you’re perfect in every way.
I can’t bear to look in the mirror, cause I get better looking each day.
To know me is to love me. I must be a hell of a man.
O lord its hard to be humble, but I’m doing the best that I can.”

I know many readers here are straight line thinkers, so I want to make sure you recognize that I am making a connection between the man in Mac Davis’s song and the physical characteristics of uranium, plutonium or thorium fission.

Steven Chu made a few more important comments during the conference call with people from Virginia.

“We are convinced that the nuclear waste issue is solvable,” Chu said.

“There are a number of options I see in the technology coming forward. We are going to look a
t recycling” of spent fuel, “but there are even newer options, and new reactor designs where you don’t have to actively recycle in a conventional way.”

DOE is committed to developing nuclear-fuel processes that don’t create “a pure strain of plutonium which, if it were to get in the wrong hands,” could be turned into weapons, Chu said.
(Emphasis added.)

Chu’s words about the solution to used nuclear fuel are quite strong; there is a big difference between what he said on September 24, 2009 and what he told Senators during his confirmation hearings, when he indicated that he believed there was more research work necessary, especially in finding ways to recycle without producing separated plutonium. It sounds to me like he and his staff have been doing some homework and now recognize just how complete some of the options are in terms of the required research.

If I had to guess which options he has learned more about, I would have to list the Integral Fast Reactor, the Traveling Wave Reactor, the Liquid Fluoride Thermal Reactor, and probably a Gas Cooled Fast Reactor. Each one of those offers the real potential of converting fertile material into fuel either directly or through a neutron capture and decay cycle. In each case, the used fuel is not removed from the power generation plant for immediate storage or recycling and none of them result in separated plutonium. Each one can use the material that we now call “nuclear waste” as fuel.

There is some possibility that I am being too optimistic, but I think that Steven Chu has made a conscious decision that there is enough completed research to satisfy his scientific criteria. Now it is time to move into development and deployment. (Of course, as a scientist, Chu will never say that the time for additional research is over. Even if we have reached a stage of “good enough” for near term deployment, he will probably believe that we can continue make nuclear energy better with more research.)

The coal industry is not the only one that has decided that it is worthwhile to spend serious money on focused advertising that plays on the patriotic feelings that Americans have while watching its athletes compete against those from other countries. I have also noticed a series of well produced ads talking about the benefits…

One of the things that I like about being working with nukes is the fact that they plan ahead. Sometimes that characteristic is frustrating to people that are a bit more impatient and who want instantaneous results. As companies continue to prepare for the second Atomic Age, they are making investments and developing partnerships to…

Yesterday, I listened in to The Energy Collective’s webinar titled Is Natural Gas a Step Toward Sustainability or an Obstacle for Renewable Energy? During the question and answer session, Charles Barton, the publisher of Nuclear Green, provided a question for the panel about the radon content of the gas extracted from the Marcellus shale. Neither…

New Zealand, a small nation that has an established policy of “No Nukes”, is also the home of a number of rational, articulate people who are having a discussion about whether or not they should reconsider their country’s longstanding position. You can find one place where that discussion is happening by visiting a New Zealand…

Here is a link to a well reasoned viewpoint from Donald A. Grant, Ph.D., P.E. He is the R. C. Hill Professor and chair of the Mechanical Engineering Department at the University of Maine. This piece is recommended reading for anyone trying to understand why so many people are waking up to the importance of…

Dan Yurman, my friend at Idaho Samizdat, is organizing a get together for bloggers and authors interested in talking and sharing stories about nuclear energy – and probably lots of other topics of interest. This event will build upon a community of interest that that got together in Atlanta in June for a wonderful outdoor…