There is little doubt that flying at high speeds in private or commercial aircraft is a power hungry endeavor that produces a large quantity of polluting emissions. This is one area where certain climate activists expose their hypocrisy because they are so addicted to flying that they do not recognize that their own activities have a large role in the overall production level of greenhouse gases and in the consumption of refined fossil fuels. Here is an amusing video produced by a filmmaker who tries to get a reasonable answer to his question about the impact of the jet set on the rest of us.

There are some answers that would help to reduce, but not eliminate the demand for high speed air travel. Electric high speed trains are one part of the equation and there is another component with nuclear powered high speed ships. Another response is a measure of patience and an understanding that travel can be a leisurely affair – I personally wish that I had not missed the era when the best way to cross the Atlantic was on a passenger liner. (My grandmother told wonderful stories about her numerous liner trips as a child and as an adult.) 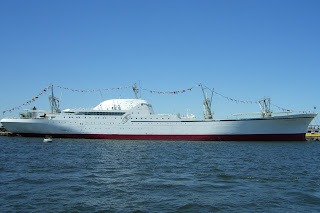 I have a well thumbed book on my shelf titled “The Power of the Great Liners: A History of Atlantic Marine Engineering” by Denis Griffiths. When I see the photos in that book of the stokers who are struggling to feed the fires to produce the power that propelled huge ships across the ocean at 30+ knots, making it possible to cross the Atlantic in a week or so, I think about large ships that could perform the same feat with far less human effort and no emissions.

When I share these thoughts with others, they often ask me about all of the jobs jobs and capital invested in the aviation industry. My answer is to ask them to figure out the total profits from the industry over the past 50 years and to wonder just how sustainable that industry is with its current structure. (Note: The aviation pioneers did not ask themselves many questions about all of the jobs in shipyards, engineering firms, or on ship crews when they came up with a product that seemed to better meet customer demands. Why should those of us who advocate a new era of shipping worry about its effect on aviation?)