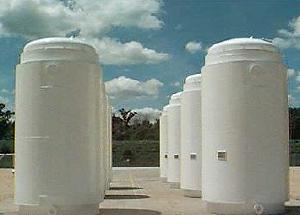 South Australia is making progress in its effort to profitably address an issue that has slowed nuclear energy’s growth prospects for more than 40 years.

On May 9th South Australian premier Jay Weatherill released the final version of the Nuclear Fuel Cycle Royal Commission report that had been briefed to him on May 6.

The report is the result of a 14-month process of evidence gathering, hearings, public meetings, report drafting, and comment response that cost the South Australian government a little more than A$7 million ($5.2 million).

The Royal Commission listened to 132 witnesses, many of whom were experts in various aspects of nuclear energy.

The panel also addressed more than 170 responses submitted during the comment period following release of the tentative findings in February.

The report’s conclusions and recommended next steps were broken into four major categories: exploration and mining; processing and fabrication; electricity generation; and radioactive waste management, storage and disposal. (See Highlights below.)

The commission found that the world’s nuclear fuel processing and fabrication markets were oversupplied and offered few near term opportunities for new entrants.

It noted that South Australia is home to 25% of the world’s known uranium resources and 80% of Australia’s known uranium, but that market is also oversupplied and underpriced.

It determined that there are no commercially proven nuclear generators that can economically compete in the South Australian electricity market as it is currently structured, even if the federal statutory prohibition on nuclear power in Australia was eliminated.

On a far more positive note, the commission made a strong case for its conclusion that there is a large, profitable and almost completely underserved market in the world for a credible, reliable, bankable supplier of handling, storage and disposal services for used nuclear fuel and intermediate nuclear waste.

The report provided details about the assumptions and calculations that led it to make the following statement on page 99:

“Integrated facilities with capacity to store and dispose of used fuel would be viable. On a number of realistic scenarios, such a facility would be highly profitable.”

A bit later in the report, there are numbers from one of the realistic scenarios that quantify the words “highly profitable.”

They showed how a program could result in total revenue of A$257 billion ($190 billion), with total costs–largely in the form of salaries and wages to South Australian workers–of A$145 billion ($107 billion), leaving more than A$100 billion ($74 billion) in profits.

The commission reported that if half of those profits were invested into a state wealth fund, they could accumulate a total of A$445 billion ($328 billion) before waste deliveries stop.

That calculation was for a notional project that envisions South Australia earning income for 70 years from storing about 25% of the world’s available used fuel and intermediate nuclear waste.

Aside: There would be no real reason to stop there if both hosts and customers were happy with the arrangement. End Aside

Long-time antinuclear campaigner Dave Sweeny (@NukeDaveSweeny) from the Australian Conservation Foundation was quoted in several news stories as having said, “We’ll be increasing our profile, our presence and our concerns….It might include protests, it certainly will include boots on the ground.”

In contrast, The Advertiser published an editorial indicating that many more people are thinking about the opportunity than about joining the opposition.

“There were just two protesters outside Government House on Friday when Rear Admiral Scarce handed over the report. At the height of anti-nuclear sentiment a generation ago, it’s likely thousands would have been marching in the streets.”

Writing for Forbes James Conca said, “This is is a very big deal. And also a very good idea.” He also provided a third party quote worth cribbing.

“Agneta Rising, Director General of the London-based World Nuclear Association, said that the report had ‘fundamentally changed the nature of the global nuclear waste discourse.’”

The federal government, in a statement issued by Josh Frydenberg, the energy and resources minister, expressed support for the commission’s report.

Premier Jay Weatherill indicated that solicitations of interest have been sent out to 25,000 randomly selected South Australians. A pool of 50 from that group will form a citizens’ jury to compile key questions raised by the commission report.

A second group of 350 from the initial group would seek community responses during the summer and report back to the government in September.

By November, the government will decide if it plans to move forward with plans for a storage facility and disposal repository. At that point it will begin the challenging process of finding a willing community host.

“Social consent is fundamental to undertaking any new nuclear project,” the report said. “Social consent requires sufficient public support in South Australia to proceed with legislating, planning and implementing a project. Local community consent is required to host a facility.”

The commission expects that the consent-seeking process might take as long as 10 years.

Even though the commission did not see any near term use of nuclear power in South Australia, it recommended several actions to keep that option available in the future.

It recommended efforts to legislatively remove the prohibition and expert monitoring and reporting of international advances in nuclear technology that might change the economics for proven systems.

The Royal Commission’s report also provided detailed reviews of all other available energy options and explained why it cautions against the assumption that currently rosy views of renewable energy and storage cost reduction might not prove to be accurate.

The report contained a lengthy explanation of the reasons why, in South Australia, climate change concerns are a primary motivation for reconsidering and revising current law. There is a far more than adequate supply of fossil fuels and other energy sources for the small population.

Some nuclear energy professionals actively resist the introduction of climate change as a primary reason why uranium deserves a place in the energy mix, but I hope they don’t waste much time trying to convince the South Australian government that it should find a different reason to become strongly pro-nuclear.

There is a synergistic aspect to South Australia’s willingness to host a multilateral used fuel storage facility and repository that the report does not adequately address.

Perhaps it’s a result of an understandable desire to avoid irrational exuberance.

If South Australia’s used fuel acceptance program is successful and imitated by one or more competitors, the entire nuclear industry may begin to recover from the lethargy that has been imposed by 40 years of constipation—-the situation that some have described as a focus on “the waste issue.”

If South Australians agree to accept the facility and the new enterprise because they’re convinced that the benefits far outweigh the almost imaginary risks, the resulting nuclear power growth should dramatically accelerate the process of working off the oversupply situations described in the report’s skeptical sections on opportunities in fuel cycle activities.

Current conclusion: There is a lucrative opportunity to supply desired service with current market void.

The above article was first printed in Fuel Cycle Week #661 dated May 12, 2016. It is reprinted here under prior arrangements between author and publishers.

Steve Kirsch, an MIT graduate and enough of an entrepreneurial success to have an auditorium at the school that carries his name, has updated his challenge to the faculty at his alma mater in a post on The Huffington Post titled Is MIT Afraid to Debate Nuclear Report?. Steve is quite serious about this challenge…

Recycle, reuse, reduce. These are the watchwords of people who are concerned about reducing the impact that man and his activities have on the world’s natural resources. The ideas that the words embody are logical and can be reasonably applied to making the world a more prosperous place to live. I was introduced to the…

If you Google “toshiba personal reactor” you will find hundreds of recent blog posts. Here is one example from dvorak.org/blog titled Toshiba’s Personal-Sized Nuclear Reactor. I have had several readers send me links asking what I thought about the design and wondering whether or not the system is real. I have taken some time this…