A friend shared a link to an EBay auction for a vintage advertisement from General Electric describing its efforts to help the world move past its dependence on burning coal. This ad appeared in 1972, just a couple of years before Ralph Nader successfully gathered a large group of organizations that had been individually fighting against nuclear energy projects. The gathering took place in Washington, DC in 1974 under the banner of the Critical Mass Energy Project. I have purchased the ad and am anxiously looking forward to adding it to my collection of smoking gun memorabilia. Normally, I tag posts with the smoking gun label when they provide evidence that a fossil fuel related entity has taken a shot at nuclear energy. In this case, the smoking gun shows that there was a time when the nuclear energy developers were taking shots at fossil fuel with some real success. 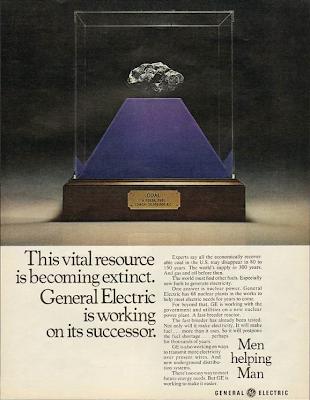 I have often been accused of being a conspiracy theorist when I point to the fact that the people with the greatest means, motive and opportunity for wounding, suppressing and attempting to kill nuclear technology are the people who sell fossil fuel. My response is that there is a difference between a conspiracy and a marketing strategy that takes aim at a competitor that might very well put you out of business if not addressed. A conspiracy is a criminal act done in secret; implementing a successful marketing strategy is often celebrated and rewarded, even when it involves some hidden messages and concealed alliances.

If you are a businessman or have ever been involved in selling a product, put yourself in the shoes of a coal merchant and try to transport yourself to 1972. What would you do if you read this ad declaring your product to be moving towards extinction? How would you feel if you were a politically powerful and active member of your community and realized that some of your tax money was supporting the Atomic Energy Commission and its efforts to develop the fast breeder reactor? What might you and your industrial friends do if you realized that the agency charged with promoting and developing the technology that might soon put you out of business was also the agency that was responsible for regulating that newer technology?

One of the parts of my theory about the coalition of varied interests who have worked hard to erect as many barriers as possible in front of nuclear energy development is that many established pressure groups with “environmental” credentials have been the frontline troops in the struggle, but their resources have often come from fossil fuel related enterprises. There was an interesting article in yesterday’s Washington Post about the magnitude of the cooperation between the pragmatic arm of the environmental movement and major international fossil fuel corporations.

Please go and read that article. I am looking forward to continuing the discussion, but now it is time to head off to my day job.

There is an interesting discussion taking place on ScienceBlogs.com on a post titled The myopia of energy production: “Nothing will go wrong”. The post is quite short, consisting mainly of a cartoon that plays on the world’s intense concern about the continuing uncontrolled gusher deep in the Gulf of Mexico to raise safety questions about…

The July 10, 2006 issue of BusinessWeek includes a commentary titled Nuclear Power’s Missing Fuel: Why Wall Street is skeptical of backing a new round of proposed nuke plants. As the column points out, there is a great deal of froth in the alternative energy technology market. Headline articles talking about ethanol, biodiesel, solar and…

In the past couple of days, I have noticed a significant increase in the amount of highly visible outdoor marketing in Washington, DC that is touting the benefits of burning methane, which is sold under the brand name of “clean, natural gas.” At the corner of 7th Street and Pennsylvania Ave., right across the street…

David Bradish at NEI Nuclear Notes has produced an insightful series of blogs about Amory Lovins and His Nuclear Illusion. The posts enter into a rather detailed analysis of some of the assumptions, deceptions, fuzzy mathematics and ill-founded conclusions reached by my least favorite energy prognosticator. There is something close to lying about a two…

On 3 July 2006, I published a post titled “Nuclear referendum in the market”. The topic of the post was the announcement from BNFL that they had decided to put its Westinghouse division up for sale. Since the division focuses almost exclusively on nuclear technology, the gist of my post was that watching the progress…

One truck driver that services the fuel depot at the Luton Airport, the scene of the explosions and fire reported earlier today told the BBC, in a story titled Massive explosions hit fuel depot that the depot has twenty tanks each containing 3 million gallons of fuel. I want you to think about the implication…