On May 25, 2010, the Nuclear Regulatory Commission and the Army Corps of Engineers held a joint public meeting/hearing to present their initial recommendation and solicit public comments following their release of the Draft Environmental Impact Statement on a proposed Calvert Cliffs Unit 3. The EIS project has been underway for two full years; I attended the initial meeting kicking off the effort in March 2008.

Since it was a gorgeous spring day and I managed to finish up work in time to escape DC before the height of rush hour, I took a “minor” detour and headed south on Route 4 rather than east on Route 50. 62 miles later, I stopped for a quick meal at the Solomons Island Pier and watched a few boats travel under the bridge between Calvert County and St. Mary’s county as the sun sank towards the Chesapeake Bay. At nearly 10:00 pm, after dozens of other speakers, I received my 3-5 minute comment slot. I briefly regretted that dinner stop and wished I had gone directly to the meeting site so I could have put my name higher up on the public comment list. It was a long drive home to Annapolis, but I guess it was worth it to both show my support and to see just how many others had taken the time to attend the meeting to share their positive thoughts and information.

Of course, there were the usual professional opposition representatives. Public Citizen sent a representative, Beyond Nuclear was there, and there was one member of a local opposition group. A couple of PhD oceanographers expressed some legitimate concerns about capturing good baseline water quality data before beginning construction and some concerns about the potential harm that can be caused by improperly contained runoff from a very large construction project near the shore of the Chesapeake Bay. One man from St. Mary’s county expressed concern about the traffic effects on that narrow bridge that I saw at dinner and worried about evacuation routes. That was about it for the negative comments.

Dozens of others spoke in favor of the project, its economic benefits, the importance of reliable electricity, the environmental superiority of nuclear over any other alternative, and the long record of safe operation for the currently existing units. Those supporters represented local government bodies, religious organizations, first responders, plant employees, plant neighbors with no direct association, the local community health officer, environmental conservation organizations, the Nuclear Energy Institute, the North American Young Generations in Nuclear, and Clean and Safe Energy (CASE).

There were several twenty somethings who talked about the plant’s importance for their future prosperity and its opportunity to supply clean power for electric automobiles and advanced gadgetry. An expectant mother shared her thoughts about the importance of new nuclear power plants for future generations and growing families. A large group of people representing trade unions who would be supplying some of the 4,000 plus skilled workers who would be building the plant populated the back row wearing high visibility tee shirts with an atomic symbol and a supportive message on the back.

I guess I really did not mind being one of the last speakers, it was heartwarming to hear the clear, well-considered messages of support.

Side Conversation With One Opposition Speaker 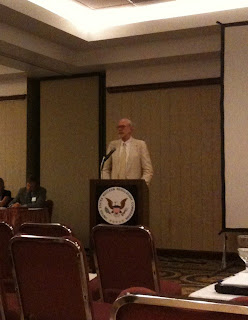 Paul Gunter, Beyond Nuclear’s lead spokesperson in nuclear reactor hazards and security concerns, spent his 8 minutes – no one gave him the gaff, but I timed his talk – trying to tell people that the NRC is not effectively protecting the public from the environmental hazard of leaks from existing reactors and should not be trusted to protect them from any harm from a new reactor. I was not surprised by his talk – Paul recognized me in the lobby and called me to his table to share a new press release on the NRC’s effort to prevent states from stepping into the business of forcing clean-ups at sites that have experienced a tritium leak.

We had a spirited hallway discussion about the lack of of any public health impact from those leaks. He tried to tell me that the Calvert Cliff draft EIS was flawed because the NRC had not fully considered the potential of wind in the waters off the Maryland shore because they used data collected off the shore of Georgia. I told him about my days becalmed off of that very shore during a DELMARVA peninsula circumnavigation sailing trip.

I also asked Paul bluntly why he spent so much time fighting nuclear on the “leak” issue when he did not spend any time fighting coal – with its designed environmental dumps called smoke stacks. I am paraphrasing his response because I did not have any recorder running at the time – “Because that is not what I get paid to do. If you want to pay me to protest coal, I will.” I thought that was an illuminating and surprisingly honest answer. Gunter, who is probably ten years older than I am, started his adult life as a protester at Seabrook nuclear power plant as a founding member of the Clamshell Alliance. Nearly thirty five years later, his full time job is still related to fighting nuclear energy. From his own biography posted at Beyond Nuclear, Gunter is “An environmental activist and energy policy analyst, he has been an ardent critic of atomic power development for more than 30 years.”

I wonder what qualifications you need for that line of work and who actually pays the bills. Gunter’s bio does not list any degrees and the Beyond Nuclear web site does not provide much information about its financial supporters. Helen Caldicott served as the founding president and Ed Asner serves as the honorary chairman. Ed Begley, John McEnroe, Bonnie Raitt, and Susan Sarandon appear in its list of launch partners.

Part of my curiosity about his funding stream is admittedly selfish. I am trying to figure out how to get into the opposite line of work – I really want to devote my full time effort to fight FOR nuclear energy. In the meantime, I need to leave now and get on the road for my day job.

Dan Yurman at Idaho Samizdat has a full series of very informative posts about the tension filled effort to get full concurrence from the 45 member Nuclear Supplier’s Group – an organization of the countries that export nuclear related goods and services – to allow sales to India, the world’s most populous democracy. It is…

Annual Energy Outlook 2006 from the US Energy Information Agency is available at http://www.eia.doe.gov/oiaf/aeo/index.html. I make a lot of use of the annual reports, but I recognize that the future projections are very iffy. The report authors understand their limitations as seers and caution report readers to evaluate the scenarios presented with a good understanding…

Several of my regular sources of information about the happenings associated with nuclear energy, including John Wheeler’s This Week In Nuclear and Meredith Angwin’s Yes Vermont Yankeehave published stories about the recent flurry of news regarding the discovery of tritium in ground water on the site of the Vermont Yankee Nuclear Power Plant. I have…

I admit it – I distrust very large companies who make billions of dollars in after tax profits every quarter. That is especially true when their leaders are reaching for my wallet and asking me to support their investments with my tax dollars as well as my purchasing dollars. I cannot fully explain how I…

As part of my rambling effort to catch up with events and commentary about nuclear power, I found an article about “new” whistleblower accusations of a massive cover up following TMI. A couple of weeks ago, I mentioned the Steven Wing studies that claim that the health records of people who lived near the facility…

My Google Alert for “new nuclear plants” pointed out an article with an interesting title yesterday morning – The Truth About Nuclear Energy. The title plus the teaser excerpt from the article made me grin – I was pretty sure I knew who the author of the comment was before clicking on the link in…