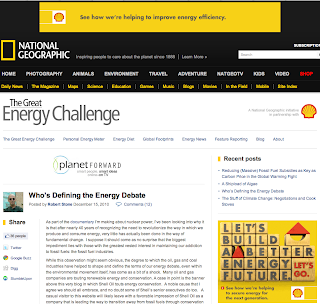 Robert Stone is an independent film maker who is working on a production titled Pandora’s Promise that explores the history and potential future of nuclear energy through a series of interviews with some of the “world’s leading environmentalists, scientists and energy experts, many of whom have undergone a metamorphosis in their thinking about nuclear power”.

As part of his effort to raise awareness of the film project, Robert made arrangements to participate in a three year effort organized by National Geographic called The Great Energy Challenge. Robert’s contribution to the discussion that National Geographic wanted to encourage was planned as a regular blog entry discussing something he had learned about nuclear energy during his research for Pandora’s Promise. 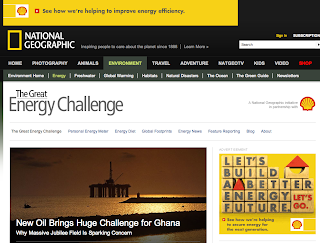 A screenshot of his most recent post, titled Who’s Defining the Energy Debate?, graphically illustrates why Robert became frustrated. As you can see in that screen shot above and in the one that I found when visiting the main page of the site, Shell is the primary financial sponsor for the effort. According to its global home page, Royal Dutch Shell, PLC is “a global group of energy and petrochemicals companies with around 102,000 employees in more than 100 countries and territories.” Its annual revenue from that business in 2009 was $278 billion, down from $458 billion in 2008, when oil and gas prices were considerably higher. It is a company that has demonstrated by its actions that has little to no interest in finding a way to break our fossil fuel addiction.

Shell never expresses any interest in developing nuclear energy, the only source of power that has proven that it can capably replace oil and gas in large scale applications. Shell shut down its renewable energy division in 2009 and Peter Voss, Shell’s CEO, told a Financial Times interviewer just yesterday that the company spends more than $3 BILLION per year exploring remote and challenging areas of the Earth for oil and gas and bragged that their program is the largest in the industry. Note: The link above to Shell’s Renewable Division leads to a page displaying the following message – “Either the page you requested could not be found, or an error has occurred.” That is the point; the URL I used for that link is the one I found by searching Google for “Shell Renewables”.

Robert was troubled by the dominance of Shell advertising messages and logos on nearly every page of National Geographic’s The Great Energy Challenge . He discovered that posting a link to his Great Energy Challenge blog entry on his Facebook page resulted in an illustrated link with Shell’s ad that features what are obviously designed to be children’s building blocks.

Robert could not understand how National Geographic could hope to encourage a reasoned, balanced discussion about our energy future when the actual pages hosting that discussion are prominently dominated by advertising messages from a company that likes our energy present and apparently thinks it would be fine to continue on our present path as long as possible. The first response to his blog was a defensive one from National Geographic, which included the following statement:

In National Geographic’s view, the involvement of the fossil fuel industry in a global dialogue on climate change and the future of energy consumption, and, in particular, Shell’s participation in The Great Energy Challenge, makes the discussion a more substantive one. We are convinced that transforming the world’s approach to energy will require citizen education and government action, as well as active engagement by the energy industry. The purpose of this three year, multi-tiered Great Energy Challenge initiative is to elevate the conversation on energy around both the kitchen and policy tables. It is our goal to explore the many facets of the energy equation without fear or favor, but with a balanced sense of urgency, importance and perspective this topic badly needs.
…
And it is worth noting that, as with all our partners — corporations, foundations and other organizations — Shell exerts no influence on the editorial process at National Geographic.

While we welcome the opportunity to exchange perspectives on this subject, we do hope we can get past questioning everyone’s underlying agendas to have the real hard but interesting conversations about the future of energy.

I am not sure if any off line discussions took place; other than the initial response by National Geographic, the rest of the commenters on Robert’s blog generally agreed that he was asking the right kinds of questions. Many of us are curious about the implications of tight relationships between a well-respected nonprofit with excellent environmental credentials and one of the world’s largest oil and gas companies. The very nature of the business also makes Shell one of the world’s largest polluters when the life cyle of its product line is taken into account. For whatever reason, however, Robert has made a decision to no longer participate in National Geographic’s The Great Energy Challenge – brought to you by Shell Oil. Here is Robert’s final comment on the thread:

For whatever it’s worth, this is my last blog for The Great Energy Challenge. I quit because I don’t want to be a party to Shell’s propaganda campaign to endear itself to the environmental community. I have no gripe against corporate sponsorship. It’s a vital necessity that as a filmmaker I fully understand and appreciate. But the nature of this particular corporate relationship crosses a very important line that I feel I’m tacitly endorsing through my participation as a blogger. It’s a ridiculously small gesture to quit, but I hope that my doing so will cause others to look more closely at this critically important component of our “great energy challenge”: the influence of the corporate power in defining the terms of the debate.

I am sorry to see Robert quit this effort. If nothing else, I hope that his writing encourages some of the well intentioned people at Nati
onal Geographic to question their decision processes. I also want to highly recommend that you visit the blog and the discussion thread, paying close attention to contribution that includes a fictional account of a discussion between “Revered Environmental Institution” and “Shell Oil Company”.

I cannot wait for Pandora’s Promise to be released.