I confess – I like atomic fission power. It is far superior to the competition, so much so that they gang up on it to try to give it a bad reputation. Part of fission’s PR problem is analogous to the way that sports fans and commentators treat people like Alex Rodriguez, Tiger Woods, Barry Bonds, Michael Jordan, and Shaquille O’Neil. All of them are/were athletes who, for a time, dominated their respective sports leagues and put fear into the hearts of all comers who had to try to beat them.

In all cases, each earned a legion of cheering fans but were also subjected to massive quantities of jeering from the opposing fans. They were the subject of delighted negativity from mere mortals and talking heads when they exposed any weakness at all, even if it was unrelated to their job as star athletes. Some of the jeering could be attributed to straight jealousy; these men got paid fantastic salaries and endorsement fees that put them into the stratosphere in comparison to the wages earned by most of their fans and even many of their fellow professionals. Some of the jeering could also be attributed to efforts to take them down a peg or two to make them less effective competitors.

No matter what I hear or read about nuclear fission, I go back to fundamental, first hand knowledge. On the submarines that I had a hand in operating, the source of the heat that made everything work was a relatively tiny mass of material weighing in at less than 0.003% of the displacement of the ship. In comparison, a ship with far less mission capability powered by oil would need to have fuel tanks taking up at least 20 and perhaps 40% of the ship’s displacement.

That ship would be a rather weak competitor because its oil-fired engines would only be able to operate at speed if it was on the surface with access to oxygen from the air and a free dumping ground for the waste products AND it would need to refill those tanks at least 12 and probably more times each year. In comparison, the ships on which I lived for months at a time operated for 15 years without new fuel and they were faster deep underwater than they were on the surface. They did not need any oxygen to make their fuel supply get hot and they did not need to throw away massive quantities of waste material as the fuel got consumed.

Of course, I know all about the cost differentials between mass produced diesel engines and low rate production nuclear steam plants and I recognize that the highly refined fuel used in submarines is a bit different from the somewhat less refined fuel in commercial power plants. However, I also know from both study and direct personal experience as a manufacturer that there are well known processes that allow the gradual reduction of the production cost and improvement in the quality for all goods that are produced in a series fashion and I know that these techniques have rarely, if ever, been applied in the nuclear world.

The fundamental, physical, undeniable advantages that are locked up in the nuclei of uranium, thorium, and other actinides are known to a relatively small number of engineers and scientists. In general, people in those professions have less developed communications skills and have not done a very good job of sharing the wonder that they must feel as they do their daily jobs. Some of them may not even realize just how magical the materials are that they work with on a daily basis because they entered the field after layer upon layer of extraneous caution and back-up systems had been added to disguise the massive quantities of power that come from tiny quantities of material. 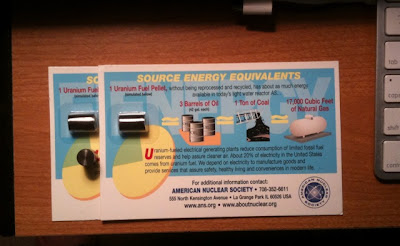 I keep three simulated fuel pellets on my keyboard try to help remind me just how incredible the materials are. Those three little pellets, if actually made of uranium dioxide, would contain as much energy as three tons of coal – if they were used in a rather primitive fashion in a once through light water reactor fuel cycle. If fully fissioned, which is possible, they would produce as much heat energy as burning 60 tons of high quality coal.

There are a few engineers and technologists who “get it” and work hard at sharing their wonder with the rest of the world. For a time, Hyman Rickover was one of those people, before he got so worried about the sniping that he was receiving from others that he began isolating and protecting his program’s knowledge and advances. Ted Rockwell, a man who helped Rickover in the early years, left the Naval Reactors program in 1964 and is still writing and sharing his knowledge today at Learning About Energy. There are some creatives who have also learned enough about fission to get excited and begin writing about its great potential for good. I put Gwyneth Cravens, Bill Tucker, Tom Blees, Mark Lynas, and a recent convert, George Monbiot into this category.

There are also some less well known people who are working hard to communicate what they know about nuclear fission in accessible ways here in the blogosphere. I try to keep my blogroll up to date with links to the blogs that devote a good portion of their space to atomic topics.

I subscribe to several email lists and participate in discussions with people who are focused on particular ways to use fission. Not surprisingly, we all look at fission and its place in the world from a different perspective and often argue amongst ourselves about the BEST way to use the amazing qualities of the process. Some of the people on the lists are still quite fearful of the technology and ascribe to the philosophy made most famous by Alvin Weinberg. He often referred to nuclear energy as a “Faustian bargain” and believed that the only way to keep it from sending us all to hell was to isolate it from society under the control of a privileged priesthood of specialists. I disagree with that characterization and oppose the whole concept of limiting the technology to a chosen few.

Some of the people with whom I correspond believe that we need to avoid promoting nuclear energy and that we should question and poke at those “newcomers” like Bill Gates and John (Grizz) Deal of Hyperion. They advise caution and believe that the First Nuclear Age came to halt partially out of hype and over enthusiasm. They are certain that the “new” ideas like smaller, factory producible fission power systems are doomed to fail and that they will inherently cost just as much to license as more complex, site constructed central station power plants.

They get concerned about the “revolutionary” ideas like using liquid metal coolants in fast spectrum reactors – forgetting that the very first reactor to produce electricity to power those four lightbulbs at the National Reactor Testing station was the Experimental Breeder Reactor. They worry that the NRC has “never before” licensed a gas-cooled reactor, forgetting about Peach Bottom and Ft. St. Vrain, which, were, admittedly, licensed before the NRC evolved out of the Atomic Energy Commissi
on. They think that all of this talk about thorium is “nonsense” that has been “tried before” without much success.

They believe that sharing a lot of information about the incredible variety of possibilities for system design will confuse the public and distract our focus. They seem to feel that the entire nuclear community should be working towards completing a limited number of very large facilities on time and on budget to “prove” that such an accomplishment is possible. One of the more troubling, but frequently discussed points is that they fear that any incident at any fission technology installation will inevitably halt all development at all nuclear projects – at least for a time.

My answer is that fission is so darned exciting that it is WAY too early in the development process to limit the scope of the developments or to limit the population of people who can get educated and trained in the math, science and engineering needed to put the physical attributes of actinides to beneficial use. The human population on the Earth consumes enough energy to provide a market for the output of thousands, if not millions of devices that can turn fission heat into motive power and useful processes. There are an infinite number of combinations of coolants, working fluids and process cycles that can work and plenty of ways to make each one of them adequately safe and sustainable.

The development and deployment process may, unfortunately, be a bit messier and unrestrained than some would want, but I like to keep reminding people that it is not as if the competition is even close to perfect when it comes to danger and environmental destruction. The only real competition to atomic fission is fossil fuel combustion. Both are concentrated enough to cause widespread harm if the processes get out of control and both produce waste material that is potentially harmful to living creatures if not well controlled. I just happen to believe – strongly – that it is easier to keep fission materials under control and to isolate their potentially hazardous waste materials.

Bottom line – I am a cheerleader for fission, but I have played in the game enough to know why I cheer and to recognize superior performance when I see it. I plan to continue to share reliable information with all of you, but if I think that ideas are good and useful, I will not try to knock them down just because they are a bit on the unusual side. On the other hand, I will ask hard questions, just to make sure that I am not being “rolled” because of my stated favoritism to fission. I will not try to elevate any fission technology by knocking down another one, but I have little fear of pointing out the challenges that our combustion competitors will have in trying to keep up with the characteristics with which nature endowed actinide fission.