I was fortunate enough to attend a sampling of sessions at the Platts Nuclear Energy 2010 meeting held in Bethesda, Maryland from February 17-19. Due to other commitments, I missed the first day, but I did make it to a series of insightful talks by key participants in the resurgent nuclear energy plant construction industry. It is an advantage to be just a Metro ride away from a lot of key conference locations in Washington.

Aside: Since there are 104 nuclear plants operating in the United States today (1.7 times as many as in France, the next closest competitor), producing between $40-80 BILLION worth of electricity, I have recently decided to stop talking about a Nuclear Renaissance. We never really entered anything like the Dark Ages, even though we are a bit rusty when it comes to building new plants and major components. End Aside.

Mike Wallace, Chairman Unistar Nuclear Energy, gave an inspiring talk that focused on all of the good things that have been put into place in the past few years to enable the nuclear construction industry to begin flourishing again. He told the audience to remember Tuesday, February 16, 2010 as an important date in the history of the nuclear industry. That was the day when President Obama made a speech announcing the awarding of conditional loan guarantees to the Southern Company and establishing a clear policy of support for new nuclear power plant construction. Mr. Wallace expressed appreciation to President Obama for “several really significant policy statements:”

Wallace also reminded the crowd that the announcement was accompanied by two important actions – awarding the loan guarantee to Southern Company and increasing the size of the pool for loan guarantees by a factor of three. He encouraged anyone who thought that their company was in line for some of those additional dollars to make sure that they were fully prepared to take advantage of the opportunity.

Bryan Dolan, Vice President, Nuclear Plant Development Duke Energy Corporation, talked about his company’s preparations for new plants in both South Carolina and Ohio. He emphasized the importance of decarbonizing the generation of electrical power and the need to modernize the electricity generating fleets to ensure reliable service well into the future. He described his company’s generating assets and the mix that makes up their current capacity – 49% coal, 20% natural gas and oil, 19% nuclear and 12% hydro. Then he gave a very important statistic – with just 19% of its CAPACITY, nuclear represents 50% of the ELECTRICITY that Duke sells every year.

Aside: That is an example of why it can be so frustrating for nuclear energy supporters when they get into discussions with renewable advocates like Amory Lovins or Joe Romm. They insist on talking about the installation rate of generating capacity of sources that only produce their rated capacity at lucky times of the day. The real need is to generate reliable energy at the time that it is needed, not the time that the weather says it is available. End Aside.

During his talk, Dolan described some of the regionalization partnerships that his company is pursuing to introduce new capacity in smaller increments that more closely match the rate of load growth. One of the challenges facing large, established utilities like Duke Energy, is that adding capacity in increments of 1200 or 1600 MWe all at once means that the capacity growth is “chunky” compared to the demand growth. The year before the new capacity is introduced, the reserve margins could be getting quite narrow; for several years after introduction, there will be a lot more capacity available than demand.

I took that opportunity to ask a question:

Dolan: We support the efforts to develop small, modular reactors. It is a long road, but we think it is a key option that we will continue to explore. As an industry, we have priorities and I think that NEI has testified to that very well on the Hill.

It is attractive for a lot of reasons presented in the Wall Street Journal. Its attractive to us, but we also do recognize that it’s a long road ahead.

Ashok Bhatnagar, Senior Vice President Nuclear Generation Development and Construction, Tennessee Valley Authority talked about how his company restored Browns Ferry Unit 1, the six year payback of that investment, and how TVA has restarted construction on Watts Bar Unit 2, a partially completed plant whose initial construction period was suspended in 1988. That unit was still under a construction license using the old Part 50 two step licensing process with construction done under one license and operation permission granted by a license that will be awarded following reviews of the construction process and testing completion.

Bhatnagar also spoke about the process that TVA has instituted for making all of its long term planning choices. He described how the company has gone through a process with the Nuclear Regulatory Commission to restore the construction permits at the Bellefonte site from a status of “terminated” to a status of “deferred”.

Bellefonte was originally sited with a capacity to host four large light water reactors; two projects were started and achieved significant portions of completion (Unit 1 at 88% and Unit 2 at 58%) before being suspended in 1988 under the regime of S. David Freeman. Due to short-sighted decisions to sell off some of the equipment at the sites when their license was initially terminated, the partially completed units are currently assessed at about 55% complete for Unit 1 and 35% complete for Unit 2.

With a reduction in power consumption with the current economic recession, TVA has some time to make its construction decisions, but it is currently evaluating the cost effectiveness of several combinations of completing the existing plants or building new AP1000 reactors from the ground up. The options range from completing just one of the existing units to completing both of them plus building new new units of the AP1000 design.

All of the speakers gave concise presentations of their project’s current status. Deborah Blackwell talked about the expressions of interest in their “nuclear battery” from people with significant power needs but no access to grid connections, military bases, and mining/resource recovery applications. She talked about Hyperion’s ability to tap some of the best brains on the planet at Los Alamos National Laboratory and about its selection of uranium nitride fuel with lead bismuth coolant. 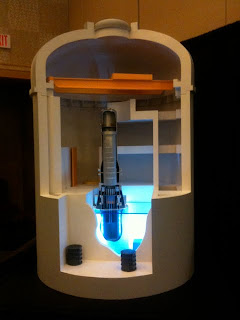 Michael Shepherd gave a good talk that built upon some of the excitement generated by the Thursday edition of the Wall Street Journal which contained a front page article about its project. He described how the mPowerTM has aspects of both PWR and BWR technologies, how it will be installed below grade to avoid any issues associated with aircraft impact, how it will have the ability to operate for 5 years between 10 day refueling outages, how it will have the option of either air (125 MWe) or water cooled (140 MWe) condensers, and how it will be able to store 60 years worth of used fuel inside the containment. Mike had been showing off the model for the mPowerTM on the day before the session, so it was good to hear again how all of the design decisions are being made.

Paul Lorenzini provided perhaps the most details about his project’s status, testing program, and cost estimations. NuScale’s Chief Technical Officer, Jose Reyes, is a former NRC regulator, so it was not surprising to me to hear how the program has been taking advantage of the scale test facility at OSU to validate the codes used for its safety analysis.

NuScale’s reactor modules bear more than a passing resemblance to the mPowerTM on the outside, or perhaps I should say it the other way around, since the NuScale was announced first. However, there is a significant difference in philosophy – NuScale has a goal of extreme simplicity by using a natural circulation system that has no pumps at all, while B&W has determined that the approximate tripling of plant capacity (from 45 to 140 MWe) within the same envelope is worth the additional initial cost and slight increase in complexity. It will be interesting to see which design wins more customers or which kinds of customers make each different selection.

Lorenzini also provided a surprising amount of detail and confidence in a cost estimate of $4,000 per kilowatt capacity based on a 12 unit order on a single site for a total of 540 MWe capacity and $4,400 per kilowatt capacity for a six unit order with the installed infrastructure to expand to 12 units at a later date. That estimate was based on actual vendor quotes compiled by Kiewit Power Constructors, the company that NuScale is using as their EPC (Engineering, Procurement, and Construction) contractor. At those prices, NuScale will be a competitive option.

Mike Mayfield of the NRC was the final presenter in the session and there was a bit of playful kidding about putting the regulator last. His talk was quite good, however, and described how the Advanced Reactor Program is structured, how applicants need to interact with the regulators to keep them from being surprised, and the importance that the Commission places on compliance with federal statutes. (The current priority, by law, for the Advanced Reactor Program is the NGNP project.) He provided a list of topics that the NRC is already working on to enable the consideration of small modular reactors including fee structure, emergency planning zones, source terms, manning requirements, Price-Anderson considerations, and secondary power sources.

The session on small reactors was only scheduled to last 75 minutes and there was very little time left when the speakers finished. The room was quite full, considering the fact that it was the last session of the conference. However, there were only two questions or comments from the audience. (You know how it is in a room full of people ready to go home for the weekend; peer pressure keeps the number of questions down.) Here was my contribution to the discussion:

Adams: My name is Rod Adams and I write for Atomic Insights. In light of not surprising the regulators, one of the things I want to add to your list is the idea of a license for a reactor that does not have a site. Because some reactors around the world do move around. One of the potential applications for small reactors is reactors that can move to wear the power is needed and when the power is no longer needed they can be moved somewhere else.

Aside: At that point Paul Lorenzini said – its nice to put a face with the name. I read Atomic Insights all the time. That made me flush with a little proud embarrassment, but I did remember to say thank you. End Aside.

Since I made a comment but did not really ask a question, Mr. Mayfield did not respond. He found me after the session to offer some courses of action and international organizations that need to be involved in the process of determining how to license a reactor that might move across borders. We had an informative chat. Then it was time to get back to work.