As an energy industry observer with a long memory, I was somewhat bemused by a recent interview aired on Platts Energy Week. Bill Loveless sat down with David Eyton, BP’s head of technology, to talk about the exciting new technologies that his company is developing.

The company is making substantial investments; in June 2013, BP reported that its capital expenditures for the first half of 2013 were $23.5 billion dollars.

My bemusement comes from the fact that BP spent tens of millions of dollars between 2000-2010 on an initially effective advertising and rebranding campaign to convince us all that its initials, originally meaning British Petroleum, now stood for Beyond Petroleum. The green and yellow sun-shaped logo seemed reassuring to many. Then a series of deadly mistakes culminated in BP’s Macondo (aka Deepwater Horizon) disaster in the Gulf of Mexico that killed 11 people and spewed more than 4 million barrels (168 million gallons) of crude oil over a period of 84 days.

BP’s marketing and development strategy has moved past “Beyond Petroleum”; any company whose technology chief gushes about extracting more oil using 20,000 psi drilling rigs at depths in excess of 30,000 feet below the earth’s surface is not moving beyond petroleum any time soon. Eyton clearly summarized his company’s long term product strategy when he made the following statement:

(Starting at 7:59 in Part 1) David Eyton: There’s no doubt whatsoever that, at the end of the day, people are concerned about the consumption of hydrocarbons and that is the vast majority of what we do at BP. We produce and we convert hydrocarbons, so we’re bound to be concerned about it.

We’re very much engaged in the debate with people about how to use these precious resources as efficiently as we can. And we also engage in the debate about a slow transition to a more sustainable energy system. But the world’s energy systems don’t change that fast. When we build assets they can last as long as 100 years in the case of one of our refineries. So we’re talking about a long term change and yes, we are very actively involved in that debate, engaged in that debate and learning what to do about it.

(Emphasis is detectable in the original audio.)

Here are a couple of key quotes from part 2 of the interview:

(Starting at 1:16) Bill Loveless: And by the way, we’re just reinforcing, you do not subscribe to the Peak Oil theory?

David Eyton: I do not. I think the world may stop using oil at some time in the future, but it’s not going to be because we run out.

Aside: That statement is quite reminiscent of one attributed to Sheik Zaki Yamani, the Saudi Arabia’s oil minister during the 1970s, a time of great disruption in the world petroleum markets.

“The Stone Age did not end for lack of stone, and the Oil Age will end long before the world runs out of oil.”

I tend to agree with Eyton and Yamani. The Oil Age will end when we begin taking more advantage of actinide energy density to develop power systems that are economically superior to oil and gas in head to head competition. In my opinion, we have the technical solutions.

What many observers fail to mention, however, is that geologists have known about the vast quantities of energy stored in shale rock for many decades. Here is a quote from Timothy Mitchell’s Carbon Democracy: Political Power In the Age of Oil:

On 10 April 1973, a week before Nixon’s energy message to Congress, James Akins had delivered a presentation in Denver, Colorado, before a meeting of the American Petroleum Institute, the collective organization of the oil industry. He repeated his argument about the inevitability of high prices, but warned that ‘there is one spectre which will always lurk in every producer’s mind: the development of new sources of energy which will make oil irrelevant. As improbable as this is in the short run, it is always possible that some dramatic, sudden technological development could render oil superfluous.’ He proposed that

hydrocarbon prices should continue to rise until they reach the cost of producing alternative energy — that is from coal, shale, tar sands or even garbage conversion. The price of energy from hydrocarbons would then roughly parallel the cost of alternative energy sources until, toward the end of the century, alternative sources would supply the growth in demand. At that time hydrocarbons could be expected to be devoted to higher uses: plastics, building materials, medicines, and even food.

The key developments that made extracting hydrocarbons from shale possible were technological, economic, and political. George Mitchell figured out how to combine horizontal drilling and hydraulic fracturing; oil and gas prices rose sharply enough in the period from 1999-2005 to enable developers to make a convincing case to financial backers that it was time to put those technologies to use. The Energy Policy Act of 2005 also contained several provisions that empowered often cash-strapped states to approve drilling plans without federal environmental reviews.

Here is a quote from the Platts interview with Eyton that should help critical thinkers understand the importance of the combination of these developments in creating the shale storm that has so captured the attention of energy industry observers.

(Starting at 0:49) David Eyton: For many years, decades now, people have been saying we are going to run out. Well, the fact is that we keep on finding more. And that’s down to two things, it’s down to the price — and that’s been going up a bit in terms of oil — and it’s down to technology. Technology keeps on improving our ability to find, and develop, and convert, and make products out of the oil resources that we find in the world.
…
(Starting at 3:36) David Eyton: Just to point out one point, these are not new technologies, fracking and horizontal drilling. In fact, Amoco, one of the predecessors to BP invented fracking in 1947, so this has been around for a long time. And hundreds of thousands if not millions of wells have been hydraulically fractured since then, so it is not a new technology. It’s just come into the spotlight, recently, I would say.

I find it fascinating how oil and gas guys gush about the way that recently developed technology has provided us access to almost immeasurable new resources of oil and gas in one breath, and then tell us that those technologies are not new or untested; they have used them for many decades.

We have a similar situation in nuclear energy. We have developed and tested such amazing technologies as the Integral Fast Reactor and the Molten Salt Reactor, each of which offers a path towards virtually unlimited quantities of emission free energy. We have also been operating reliable small reactors that can be built in factories since the very beginning of the Atomic Age. However, critics often dismiss those technologies as unproven or speculative.

Maybe all we really need is the equivalent of what the Energy Policy Act of 2005 did for natural gas drilling to unleash the world-changing potential of new nuclear energy developments. It would only take a modest set of rule changes and a reemphasis to the leaders of the NRC that their mission is to regulate “the Nation’s civilian use of radioactive materials to protect public health and safety, promote the common defense and security, and protect the environment.”

If read carefully, with a comprehensive understanding of our energy needs, it is hard to avoid the strong sense that the NRC is supposed to perform its regulatory assignment in a way that enables the use of radioactive materials so those energy dense isotopes can contribute as much as possible to providing a better life for us all.

It would also help speed nuclear energy development if companies like BP would invest a portion of their massive capital budget into an aggressive effort to develop new nuclear energy systems. It certainly would not hurt the nuclear industry if multinational petroleum companies effectively contributed their considerable large project development skills.

Of course, I am not holding my breath waiting for established petroleum companies to take a page from Apple and invest to control the disruptive technology that threatens their current comfortable business model. I expect that the investments are more likely to come from well capitalized energy consuming companies that are not so happy about the way that oil prices have increased by a factor of ten in the past 15 years.

As a lazy man who likes to repurpose his work whenever possible, I want to share a note that I just sent to some of my nuclear friends who question my analysis about the actions of fossil fuel interests to restrain the growth of nuclear energy.

Rod, I have never been a big fan of conspiracy theories. Particularly those that claim the fossil fuel industry is blocking nuclear power. I think most industrialists are about making money.

The leaders of all commodity businesses spend a good deal of time thinking about things like “overcapacity”, “supply and demand”, erecting barriers to entry, and beating their competition. You are correct that they are “about making money”, but the rise and fall of market prices as a result of those factors play a huge role in how much money they make each day.

That is not “conspiracy theory” talk anymore than it would be conspiracy theory talk to note that members of the New York Giants spend tens of hours per week, even during their off season, studying “film” of their opponents, trying to identify weaknesses and figuring out ways to take advantage of their own strengths in order to come up with as many Ws as possible.

Unlike most nuclear people, I have spent a fair amount of time in board rooms, strategy sessions, marketing meetings, and investor presentations. In addition, I developed a hobby of investing and reading the business press when I was just a plebe at the Naval Academy.

Here is a short story from Daniel Yergin’s The Prize, one of the seminal books on the energy industry.

END_OF_DOCUMENT_TOKEN_TO_BE_REPLACED 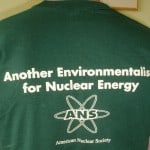 In my engagement with the Sierra Club group on LinkedIn (note – the group is not sponsored or affiliated with the actual Sierra Club) I ran across a commenter who would probably find some kindred souls among the Peak Oil pessimists and the skeptical survivalists. Here is what he told me after I had described […]

During the next few days or weeks, I am going to try to develop an energy story that I hope will inspire action, not depression. I may not succeed. The first installment is the first half of a 90 minute documentary video titled A Crude Awakening: The Oil Crash a 2007 documentary film that includes […]

I do not hate oil companies, I hate their business model. I hate the fact that they are capturing a vast portion of the world’s wealth and power by extracting an ever higher price for essentially the same product that they have been selling for 100 years with few technical improvements that make it more […]

Twice during the past week, I have run into antinuclear rants that point to Admiral Rickover’s final testimony to Congress in January 1982 as evidence to support an assertion that nuclear energy should be avoided. Admiral Rickover was one of the pioneers in the field of capturing nuclear fission energy for beneficial use; he is […]