In an long delayed effort to prove to Vermont legislators that they are taking action to correct leakage of mildly radioactive water into the ground under the buildings that house Vermont Yankee, Energy as announced that they have disciplined 11 senior employees, five of whom have been removed from their positions and placed on administrative leave. In response to that action, the Nuclear Regulatory Commission has decided to issue a Demand for Information which will require company representatives to testify under oath in response to questions about the plant operation and the information that has been provided to the NRC in relation to the tritium leaks.

If the potential consequences of the situation were not so serious, I would be enjoying a cynical chuckle at the way that seemingly smart people can royally screw things up.

A colleague of mine used to keep a sign over his stateroom door that said:

“There is no sense reacting if you cannot overreact.”

It was an ironic commentary; Mike was actually a very calm person who was very difficult to perturb. He was exactly the kind of leader that we all liked to have on our team; when the stuff was hitting the fan or the smoke was filling a compartment, he would calmly step through his carefully considered actions to solve the crisis. One of the keys to his success was the fact that he was always on the lookout for clues that something was not quite right – that allowed him to take action early to avoid what could easily turn into a crisis without an early response.

I learned a lot by watching and trying to emulate Mike; when I arrived on that boat, I was one of those bright young fellows who had not yet failed at anything. People who have regularly succeeded without much testing can be dangerous – they do not learn the importance of calm response in the inevitable crises that will occur eventually.

It is important for me to state this upfront so there is no misunderstanding – I strongly support the continued operation of Vermont Yankee. It has been a reliable supplier of emission free electricity for nearly four decades and with proper maintenance there is essentially no technical limit to the length of time it can continue to keep producing what is probably the most important manufactured commodity in modern society.

That said, it has become clear to me that the corporate leaders at Entergy have proven that they never served with a guy like Mike and never learned that taking early actions to prevent problems works a hell of a lot better than massive overreaction once it finally becomes apparent to everyone that action is required. Panic at the top never works – it destroys the confidence of the people that have to work steadily to fight a fire, correct public perception, or respond to outright attacks that threaten ship (or plant) survival.

When I first read about the NRC’s decision to issue the Demand for Information, I thought that the regulators were bowing to overblown media and political attention to a very minor issue – the amount of tritium in the ground under Vermont Yankee is no threat to anyone’s health and never will be. After thinking more about the situation and doing as much research as is possible for a guy who is several hundred miles away from plant and also has a pretty demanding full time job, I realized that the NRC has valid grounds for concern. Though the staff knows that the tritium is not a public health concern, they also know that 11 senior people at one of their licensed plants have been disciplined or removed from their position.

“. . .did not find that any Entergy Nuclear Vermont Yankee employees intentionally misled the Vermont Public Service Board, the Department of Public Service, a Public Oversight Panel assessing the plant’s reliability as part of its application for renewal of its operating license, or a contracting firm working for the panel, Nuclear Safety Associates.”

There is even a legitimate concern for the overall safety culture at the plant – after all, without visiting the plant and talking to employees it is hard to determine how they feel about the way that some of their colleagues are being treated.

At my current organization, we have a saying for what happens when a fall guy gets chosen to take the blame for what is often a systemic issue or one whose root cause can be traced to a “bullet-proof” decision maker – “He got thrown under the bus”.

I have not yet met any of the employees at Vermont Yankee, and I am just projecting my own response here, but I can imagine getting quite spun up if I saw one of my colleagues taking the hit for doing something innocuous like telling an investigator that there are no buried pipes carrying radioactive fluids even if he knew that there are pipes in trenches that are below ground level that carry air and non condensible gases from an “off-gas” system.

Engineers use a precise language where seemingly similar words mean totally different things and have completely different technical requirements; that kind of distinction is perfectly legitimate to them. I have been around enough smart engineers and technical types for enough years to recognize that it is quite likely that the Entergy employee making that distinction in response to an investigator would be a bit dismissive of the ignorance of the questioner. Smart people who have developed expertise in a narrow field can – believe it or not – look down on those people who do not know quite as much as they do.

(I have been accused of that kind of behavior even when I meant no harm and did not mean any insult; I am in a 12 step recovery program to become more humble.)

Lest you think I have rambled too long, let me wrap this up. A steadier hand at the top of the corporation would have recognized that there were strong forces at work in Vermont to destroy a valuable asset. Leaders with questioning attitudes who recognize that continued operation of that valuable asset would require a multi-layered defense with a strong coalition of allies would have been working hard to build that base of support and would not have used the upcoming license renewal as an opportunity for a sharp increase in the price of the electricity that the plant manufactures. (The threat of a prompt jump in price fractures the natural coalition of supporters.)

They would have recognized that their representatives on the ground – the work force at the plant – were the foundation on which to build that support. When outside pressure built by magnifying a seemingly minor issue through positive feedback mechanism of politics and press they would not have responded by blaming the very people who are best positioned to solve the problem; they would have recognized that leadership sometimes means sheltering employees and proving to them that someone has their back as they work to manage a crisis.

There is also a cautionary tale here for the NRC. During my conversation with the public affairs officer, it came as a complete shock to him when I stated that his organization would be doing environmental harm if it did not work to protect the plant’s continued operation. He told me that kind of thinking was never introduced in meetings there – the organizational philosophy is that the “safe” path is to shut down the plant if there are any questions or concerns.

I reminded him that the NRC’s charter includes provisions to protect the environment; shutting down a nuclear plant that has no safety related issues will INEVITABLY harm the environment because the power WILL be produced by burning either coal or natural gas, which both dump pollutants into the environment – by design. Here is a quote from the Act that establishes the NRC’s responsibilities:

The Act requires that civilian uses of nuclear materials and facilities be licensed, and it empowers the NRC to establish by rule or order, and to enforce, such standards to govern these uses as “the Commission may deem necessary or desirable in order to protect health and safety and minimize danger to life or property.“

I reminded him that coal and natural gas are not “safe” alternatives. I also mentioned that just down the river from Vermont Yankee five people had died in a gas explosion in the very recent past. He told me that he would bring that up the next opportunity he had in a policy discussion.

It surprised me to find out that my line of thinking was new to this particular public affairs official – I am pretty sure he has been at the commission for quite some time. Why would my interpretation of the rather simple and direct language used in the Atomic Energy Act be so unusual?

Arnie Gundersen, a self-described expert witness, testified in front of the Vermont Senate Natural Resources & Energy Committee earlier this week. The topic of the testimony was the discovery of tritiated water in groundwater monitoring wells located within 100 feet of the power plant and its associated buildings. A secondary topic was speculation about the…

Sometime between June 24, 2015 and January 21, 2016, a building remodeling project in Steamboat Springs, CO resulted in the loss of 7.5 curies of tritium. A reasonable guess is that the container holding the tritium was tossed into a construction debris dumpster and carted off to a local landfill. The incident was reported to…

This will be a multi-part post aimed at addressing a convoluted and emotional issue. It will attempt to satisfactorily answer the following questions. Why are organizations targeting the Turkey Point power station? Why do they claim that the plant is threatening the Everglades National Park, the Biscayne Bay National Park and the groundwater adjacent to… 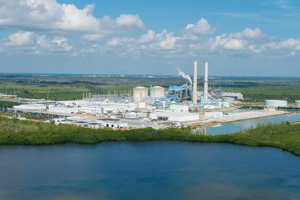