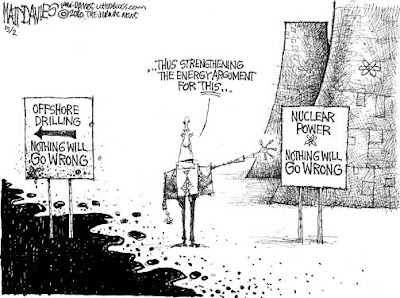 There is an interesting discussion taking place on ScienceBlogs.com on a post titled The myopia of energy production: “Nothing will go wrong”. The post is quite short, consisting mainly of a cartoon that plays on the world’s intense concern about the continuing uncontrolled gusher deep in the Gulf of Mexico to raise safety questions about nuclear energy systems. The obvious message is that since some politicians and business leaders incorrectly asserted that deepwater drilling was safe enough to allow without conducting any environmental impact assessments, it follows that assertions by nuclear engineers and scientists that nuclear energy is safe enough to allow the continued operation of existing facilities and the construction of significantly more facilities must obviously be incorrect.

I do not follow that logic or agree with the implications. You should not have to be a petroleum or nuclear engineer to recognize that there is a significant difference in the level of difficulty between drilling a hole into a high pressure reservoir of explosive natural gas and flammable oil that is located several miles below the earth’s crust under 5,000 feet of water and the level of difficulty of operating a nuclear energy facility with multiple tested and licensed safety systems that control a reactor core built with redundant protective layers designed and tested to contain radioactive ceramics and the associated high temperature, high pressure water used to turn the heat into useful electricity.

Some of the people who have commented on the thread have asserted that they would be far more comfortable living in a world that did not need to take risks with either petroleum or nuclear energy. They claim that they have never heard of a solar related major accident. Others in the thread have pointed out that is because solar power production is so tiny in comparison to the world’s needs. They assert that accidents would occur if the technology was scaled up and storage systems were installed. 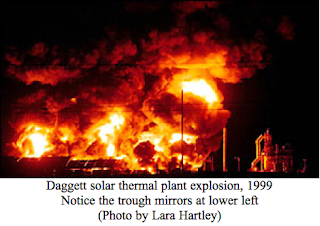 (Aside: In 1999, a fire in the thermal storage system severely damaged the solar electric generating station I (SEGS I). That plant was one of a series of nine solar thermal power plants with capacities ranging from 14 MWe to 80 MWe. A developer company named Luz built those systems in the Mojave Desert near Daggett, California in the mid 1980s when there were generous subsidies and mandated power purchase agreements available for alternative energy systems. There is a fascinating story – with pictures – by a photo journalist about the SEGS I fire and her effort to cover it located at Behind the Viewfinder – Lara Hartley. End Aside.)

The comments on the thread associated with The myopia of energy production: “Nothing will go wrong” are quite thoughtful and demonstrate a respect for various positions. I decided to wade into the discussion, especially since the way that I discovered the discussion was that one of the participants referenced one of my favorite Atomic Show episodes, the one titled The Atomic Show #149 – Pro-Nuclear Bloggers Reaction to SOTU.

Here is the comment that I posted. I encourage others who have decided to become strong nuclear energy advocates based on their own personal experiences to take advantage of opportunities to share their story and provide a witness for those people who see the technology as something mysterious and full of unknown dangers.

I am a blatant promoter for increasing our use of atomic energy systems. My reasons for engaging in that activity, however, are based on personal and close experiences that I believe are worth sharing with others who would like to live a life in a world with abundant, safe, clean and affordable energy that requires a certain amount of study, diligence and integrity among its operators.

My issue with the normally “acceptable” alternatives to burning massive quantities of fossil fuels is that they simply cannot do the job. Yes, there are plenty of studies that show that massively overbuilt systems connected through numerous transmission paths might be able to cover a certain portion of energy needs. The problem for me as an engineer is that no system anywhere in the world has been implemented on even a village scale to provide a significant portion of the area’s energy with “renewables” – unless you want to count places where there is dire poverty and people live like they did 200 years ago without hot and cold running water, indoor cooking with the flick of a switch or valve, and the ability to read books at night without the flicker of a candle.

There are many examples in history of civilizations that faltered when the “biomass” fuels that they depended upon could not longer grow fast enough to support the needs of even a small portion of the society.

Going back to my advocacy for nuclear – I have spent months at a time sealed up in an isolated underwater environment where all of the power 150 people needed for cooking, computing, reading, breathing, showering, and watching movies was produced almost as a by-product of a compact nuclear reactor power system whose main purpose was to drive that contained environment around the ocean at speeds that could be in excess of 20 knots. While operating in a small space where there was no additional oxygen and no place to dump any waste products, that power plant served reliably and safely for 15 years on a quantity of fuel that weighed just a bit more than I do.

Sure, we knew that something could go wrong. The plant was designed, built, maintained and operated by fallible human beings, after all. However, everyone involved in the process was well trained not only to understand all of the engineering and technical requirements, but also carefully trained in personal responsibility, integrity, and diligence. We understood the need to work hard, but also built in processes and systems that did not depend on being perfect. We were fairly compensated and could afford to raise families that we cared deeply about. I do not think there are many titans in the nuclear energy business who are only motivated by accumulating massive quantities of wealth.

I have spent the past 29 years involved or associated with people who performed similar work at large commercial power plants. They have the same kind of safety culture and respect for the massive quantities of energy that they control. The plant designers know that things can go wrong, so they spend an incredible amount of time thinking of all of the things that might go wrong and engineering either stronger containers or better systems that avoid major consequences for any failure or casualty. The operators spend about 20% of their work year in training that i
ncludes accident scenarios and response on some incredibly high fidelity simulators.

Though people without engineering training or system knowledge might disbelieve me, I would be comfortable living and raising a family inside the fence line at nearly every nuclear station in the US. The only reason I put the qualifier of “nearly” is that a few of our plants are in locations that are otherwise kind of ugly or desolate anyway, so I would not choose to live there even if there was no plant at all.

Rod Adams
Publisher, Atomic Insights
Host and producer, The Atomic Show Podcast
Founder, Adams Atomic Engines, Inc.
(Like I said at the beginning – I am a blatant and aggressive atomic energy promoter. Someday, I might actually start making instead of spending money on the projects.)