I have spent many hours listening to NPR radio stories while commuting back and forth from Annapolis to Washington since the summer of 2001. I enjoy the in-depth coverage and the lack of the usual kind of shouting commercials. There are times, however, when I get disappointed. This past week has been one of those times as NPR’s morning edition aired more than 20 minutes (three episodes of more than 7 minutes each) worth of what is essentially a commercial for a power source that competes with my favored nuclear energy – natural gas.

I recognize that I have significant biases in this area and will expose them up front.

I have no real beef with the portrayal of natural gas as a cleaner fossil fuel that has a strong domestic component. Both of those characteristics are true. My main complaint is with the depiction of natural gas as a “mom and pop” enterprise that has little political involvement or power. There may, in fact, be a large number of small, domestic producers that drill lots of wells and produce family incomes, but that is not the extent of the industry.

ExxonMobil, for example, produces 4 million barrels of oil equivalent (BOE) each day, but fully half of that production is in the form of natural gas. As I described several weeks ago, ExxonMobil has invested more than $30 billion into a single natural gas production facility in Qatar that includes Liquified Natural Gas (LNG) capabilities so that the gas can be delivered to the United States and other gas burning customers around the world. During the same week when NPR was talking about the poor, helpless, politically impotent natural gas industry, Reuters published a story quoting Lamar McKay, chairman and president of BP Americas (a subsidiary of BP – formerly known as British Petroleum. That is not the same BP that is associated with T. Boone Pickens) as saying 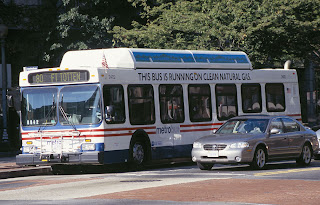 In other words, I simply do not buy the portrayal of natural gas producers as politically or economically disadvantaged. I work in Washington and see the billboards and the rolling billboards on the buses that shout “THIS BUS IS RUNNING ON CLEAN NATURAL GAS”. I have also visited the very professional and well appointed studios at Clean Skies TV, an organization that is solely funded by the American Clean Skies Foundation, which gets a big chunk of its money from companies like Chesapeake Energy, an $18 billion (market capitalization) company that is one of the major independent natural gas producers in the United States.

I happen to LIKE Chesapeake Energy (I have been a stockholder for many years) and I like many of the characteristics of natural gas. It is a flexible fuel, but more importantly, it is a valuable input raw material for thousands of manufactured products that make our lives more comfortable and enjoyable. However, producing and selling gas is a big business and there is no real comparison between a fuel that reduces CO2 emissions by as much as 50% over coal and one that eliminates emissions altogether, like uranium or thorium do.

I have listened carefully to the NPR stories once again from their web site, but not once did I notice any mention of nuclear energy as another domestic, competitive power source that can free up far more natural gas for uses like vehicle fuel and chemical raw materials. Both oil and coal plus the warm and fuzzy wind and solar alternatives did get some mention. Here is a screen shot from the NPR audio player window that popped up when I reviewed the stories. Thought provoking, isn’t it? 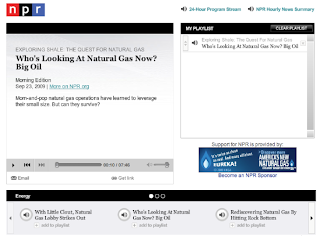 Here is another thought provoking detail about NPR’s coverage of natural gas. The producers sought the opinion of environmental groups like the Worldwatch Institute. Here is the quote that aired:

“Natural gas is the cleanest of the fossil fuels,” says Christopher Flavin, president of the Worldwatch Institute, a think tank that does environmental research. “I think nobody’s ever argued that. The big thing, of course, that’s changed is that shale gas has now opened up as this enormous resource.”

Natural gas emits half the carbon of coal. Flavin and some other top environmentalists want Congress to embrace natural gas as a transition fuel, to move the country away from coal and toward clean fuels that haven’t yet come on the market.

I thought that name sounded familiar. It turns out that I have had a chat with Mr. Flavin at a gathering of the Progressive Policy Institute where we discussed his thoughts about distributed nuclear power plants compared to his vision for carpeting large swaths of desert with solar panels. It seems that he likes methane gas that has been extracted by fracturing shale rock a lot better.