According the the UPI, an explosion in a gas pipeline in the North Caucasus republic of Ingushetia has resulted in service disruption to somewhere between 100,000 and 230,000 people. The article indicates that repairs should be completed by Monday January 18, 2010. The article does not state the cause of this explosion, but it implies that the explosion was not accidental by mentioning that two bombs were deactivated on a different pipeline in the same republic during December 2009.

There was also a report last week – on January 12, 2010 – of an attack on a gas pipeline in Dagestan that cut service to 11 towns including Derbent, Dagestanskiye Ogni and Mamedkala. I had no idea where these places were until I “flew” there using Google Earth. Only when I arrived and established a proper altitude did I realize that Dagestan and Ingushetia both border Chechnya in the mountainous and often conflicted region between the Caspian Sea and the Black Sea. 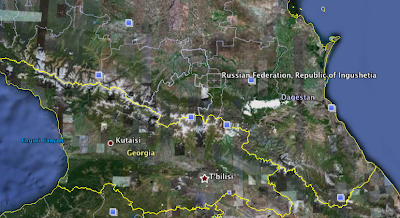 The Caspian sea is a resource rich territory with a long history of oil production dating back to the era when the Nobels and Rothschilds were getting rich in the Baku oil fields. Because the Caspian is a land locked body of water, well-positioned people in the less resource endowed regions near-by have still benefited through hosting pipelines and other oil and gas transportation systems. The names and borders of the republics in the area have changed several times over the years.

It appears that the battles over control of the region are hitting at the important and apparently vulnerable pipelines as a way of imposing hardship and gaining political power. Interrupting the flow of natural gas during the cold winter months can be especially effective. This conflict bears watching. I think I will go and study more about the geography of the region and practice spelling the unusual names of the people, countries and towns located there.

Though the conflict may be local, it will have impacts in important world energy markets. Unlike the Internet, which is a network designed to be able to route information around failed nodes and wires, gas pipeline networks have fewer alternatives. If there is a break in the pipe, the gas stops flowing until the break is repaired and tested. People who control or attack pipelines can impact the lives of a lot of shivering customers.