Back on September 25, 2009, I wrote about a three part National Public Radio special about the U. S. domestic natural gas that portrayed the industry as a “mom and pop” enterprise made up of thousands of small companies with little political clout in Washington, DC. I expressed my skepticism about that portrayal at the time.

Just a couple of days ago, I wrote about the blitz that portrays “new natural gas” with a series of television advertisements based around “eureka” moments where everyday people learn something new about natural gas that leads them to believe that it is a good bridge fuel to the future. One of the facts that gets a lot of play is the recognition that new drilling technologies have enabled an increased reserve base, now computed to be 100 years “right here in the States” as one of the ad actresses claims. (See: New Natural Gas Commercials – Why Are They Bragging About a 100 Year Supply?) 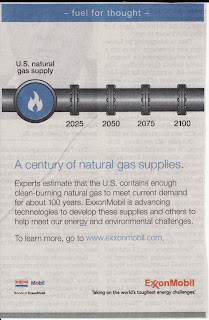 Yesterday morning, in the bottom right hand corner of the front page of the Wall Street Journal, I noticed another example of the drumbeat being provided to both consumers and decision makers regarding the size of the US natural gas reserves. The obvious message here is that America can stop fretting about energy, after all, we have lots of this “clean, natural gas” to burn. Heck, it will supply current demand for 100 years! This new version of the message is brought to you by that tiny, powerless, “mom and pop” enterprise known as ExxonMobil. I am sure you have heard of that poor company, but did you know that its quarterly profits crashed by 68% in the most recent quarter, all the way down to $4.73 BILLION?

Please understand, I actually admire the engineering prowess that enables ExxonMobil to prosper and I am not opposed to profit. I just cannot stomach the notion that natural gas suppliers are politically or economically powerless and I cannot understand why anyone believes that the revelation that the US has enough natural gas to last us for 100 years – if we do not increase our consumption rate – is something that should discourage us as a nation from immediately seeking better, cleaner and more long lasting atomic alternatives.

Of course, it is not hard at all to understand why the companies running the advertisements want to slow down the search for alternatives – after all, what commodity supplier really likes competition from a cheaper, cleaner, more abundant rival?

Update: There is a half page editorial in today’s Wall Street Journal by Daniel Yergin, chairman of IHS CERA and author of The Prize: The Search for Oil, Money and Power (1991), one of the best books about the oil and gas industry I have ever read. Today’s editorial is titled America’s Natural Gas Revolution. It again attempts to explain why we should be so exited about 100 years of gas – at current consumption rates – and discusses electricity supply options without even mentioning nuclear power. Hmmmm.

In an article in the Kansas City Star titled Atomic power finds new popularity, Gary Rainwater, the CEO of Ameren Corp is quoted as saying that his company is “seriously considering” adding a new nuclear power reactor at the Callaway Nuclear Plant. The article is quite lengthy and expresses some amount of excitement on the…

I published the promised episode of The Atomic Show with clips from Steven Chu’s confirmation hearing with the Senate Energy and Natural Resources Committee this morning. After spending several hours listening and digesting the sworn testimony of the proposed leader for the DOE, my conclusion is that there is still a lot of work left…

There is a quick poll in operation at the Global Network of Environment & Technology (GNET) web site that is asking the following question: “Can nuclear-based energy be considered “clean” since the reactors don’t emit the pollution or greenhouse gases of coal-burning plants?” I have already cast my vote, but the early results indicate that…

One of the myths of the first Atomic Age was that safety fears following Three Mile Island halted new development. A more careful reading of history shows that the new development had already stopped well before April of 1979; the first major wave of order cancellations happened soon after the Arab Oil Embargo of 1973…

On January 28, 2009, the Senate Foreign Relations committee invited former Vice President Al Gore in to testify about global climate change at its first major policy related hearing of the current Congress. Through the amazing tool of C-span video, I watched and listened carefully to the entire hearing yesterday morning before going to my…

It is difficult to get into an internet conversation about the economic advantage of nuclear power without having someone make the claim that nuclear plant operators could not be economically competitive without the Price-Anderson insurance “subsidy” from the federal government. My general response has always been that it is hard to call Price-Anderson a subsidy…