Editor’s Note: Sometimes stories are best told out of sequence. We’re starting here with part 3 of a timely tale about a strong leader with a moral compass who has decided to enter into a political race out of faith in his country, its system and himself.

When I started Environmental Progress last year, I vowed to take whatever ethical and legal means necessary to save our largest source of clean energy.

I would still research, write, and speak. But I would do so in the arena, not from an armchair.

My decision rested on a kind of faith: if you do the right thing, the universe will move to help you.

And to a great extent it did. From New York, Illinois and Connecticut to South Korea and France, governments have decided to stick with nuclear energy, in part due to our efforts.

But in California, we’re stuck. The effort to kill our last nuclear plant, Diablo Canyon, is being prosecuted at the highest levels of government. 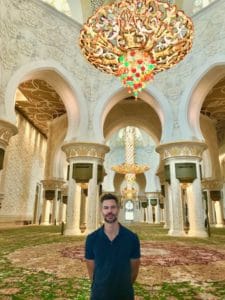 The author at Sheikh Zayed mosque in Abu Dhabi.

And I discovered that Brown was doing so in order to feed a corrupt political machine that includes his closest family and friends.

“You take off-line one of those big nuke plants,” an energy attorney told me last year, “and a bunch of people get very rich.”

Together San Onofre and Diablo Canyon comprise 20 percent of California’s total electricity (40 percent of its clean power). The contracts for replacing them are literally worth billions of dollars.

The recipients of those contracts then turn around and make large donations to groups like Natural Resources Defense Council (NRDC) which goes around proclaiming California a climate leader.

The main tool Brown uses to replace nuclear plants with fossil fuels is the California Public Utilities Commission, or CPUC.

The CPUC operates as a slush fund for the Brown Machine, is under federal criminal investigation, and is hiding five dozen emails that likely show Brown’s direct involvement in killing San Onofre.

Governor Brown has twice killed legislation that would have reformed the CPUC and ended the secrecy.

It turns out that PUCs in much of the U.S. go through repeated cycles of corruption and reform. There have been two prior reforms, the first in the 1920s and 30s, and the second in the 1970s.

We are due for a third wave of reform.

I encouraged a prominent reformer to run, but the person refused.

As I took a look at the other candidates running for governor, I gained confidence that I could get elected and reform California’s corrupted government.

I mentioned to a friend who worked at high levels within the Brown Administration that I wanted to run to clean things up. This person surprised me by responding encouragingly.

“Hatred of corruption is non-partisan,” another friend told me.

But then, as I got busy saving nuclear plants around the world, the idea of running governor went to sleep for a year.

It returned in October while I was taxiing down a runway at San Francisco airport.

I had just given speeches and met with policymakers, journalists, and politicians in Taiwan, South Korea, Abu Dhabi, and Australia.

On landing, I read a blog post by UC-Berkeley economist Severin Borenstein, who also served as one of the state’s top oil regulators.

He described how the average Californian family of four had paid $1,200 in higher gasoline prices since 2015 and neither the Brown Administration nor the State Legislature are willing to investigate.

The gasoline price manipulation could very well be a consequence of yet another dirty Brown deal, I thought.

Brown has a record: 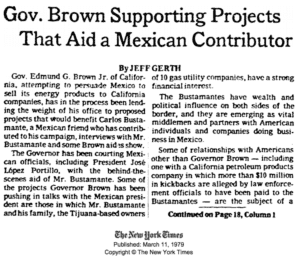 I was fed-up. Why was I fighting for clean energy everywhere, I asked myself, except in my home state of California?

I told my closest friends and family members that I had important news to share. Most were shocked. “I would never have guessed that,” several told me.

After I told Madi, EP’s executive vice president, she said, “Oh Michael!” and then turned her head and started to laugh.

But Madi couldn’t speak. Tears streaked down her cheeks, and her body was convulsing with laughter.

“I mean it’s not really that crazy,” I said, growing defensive. “Don’t you think I’ll do a good job?”

Her voice trailed off and she again began to shake with laughter.

I gathered together the rest of EP staff. I told them I had some important news to share about California.

“I know what you’re going to say!” said Michael.

“How could you possibly know?” I asked. “Did Madi tell you?”

“No!” all three said in unison.

“Look,” I said, “if you think you know, write it down on a piece of paper and turn it over so nobody can see it.”

I then went through a rather long-winded explanation before I arrived at the punch line.

“Ha!” Selene and Michael shouted, throwing their little scraps of paper at me.

I stared at them.

The first scrap read, “Shellenberger is running for governor,” and the second, “Michael is going to run for governor.”

Right away doubts started to creep in. I called Kirstin Zaitz, co-founder of Mothers for Nuclear, and the least-crazy person I know. I told her I was *considering* running.

“Good,” she said, without missing a beat. “You should.”

That night her husband, Omega, sent me a text.

“Kristin told me you were thinking of running for governor,” he wrote. “I think you can win. California is ready for a fresh change.”

I forwarded the text to Madi, seeking further encouragement.

“People believe in you, dude,” she texted back. “Trust yourself on this one, Shellenberger.” Madi texted a fist emoji.

But I still didn’t. The doubtful voices in my brain had set up base camp in my amygdala and were firing mortars at my prefrontal cortex.

“Do you really think you can win?” they’d ask.

I’m not totally sure but I think by offering an inspiring and pragmatic vision, demanding reform, and exposing the truth.

“But what will happen to EP?“ the voices asked, annoyed.

Nothing, I explained. I’ll remain President of EP just as my opponents remain in their jobs throughout the election.

“What if you lose?” the amygdala army shouted in union.

Then I’ll be able to go to my grave without this as one of my regrets, I thought.

That quieted them down for a bit, but over the next several weeks, as I spoke with policy advisors, developed my platform, and read more about my state and its political system, the skeptical voices came roaring back.

Finally, after I had returned from yet another long and exhausting trip, this time to Germany, Japan, and Taiwan, Team Amygdala won. I sheepishly met with, called, and emailed everyone, and told them that I wasn’t going to run for governor after all.

“EP has been on a roll, winning a string of surprising victories,” I told them. “But we are still too small and too under-resourced to achieve our mission. I’m going to focus on consolidating EP.

“As for California, we’ll find some other way to get the truth out,” I insisted. “We can publish reports and articles and maybe even a book.”

Most seemed relieved — me included. If you look at my eyes in various photos over the last two years, I always seem to look tired.

I imagined myself sleeping more, playing more soccer, and doing more home repairs. I had worked ridiculously hard, and now I could get more work-life balance. 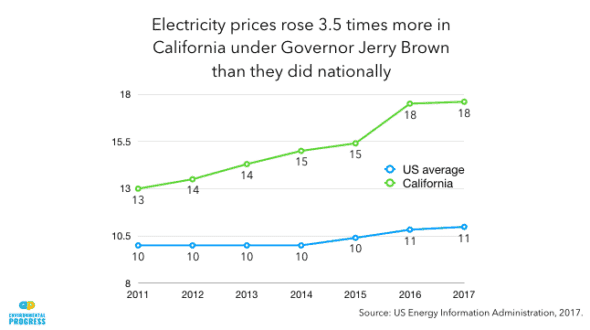 Then, last Thursday morning, I watched a video recording of New York Times columnist Thomas Friedman interviewing Jerry Brown the night before at the newspaper’s ClimateTech conference in San Francisco.

Friedman tossed marshmallow question upon marshmallow at Brown, most of which focused on what it would take for other states and nations to follow his supposed leadership on climate change.

My blood started to boil. Here was the most famous columnist at the world’s most important newspaper failing to ask a single serious question of a man whose term in office had resulted in:

— killing 40 percent of our clean power and replacing it mostly with fossil fuels;

— increasing emissions at a time when emissions nationally had declined;

— increasing electricity prices from 13 to 18 cents/kWh;

I could write all the books and articles in the world, I thought. They’d get some polite attention by the newspapers and maybe even some calls for reform in Sacramento. And then California would return to corruption-as-usual.

Armchair advocacy wasn’t going to cut it. If the problem was in the arena, then I needed to grab my cape and sword and fight the bull.

By coincidence, I was scheduled to be interviewed on-stage at the very same New York Times ClimateTech conference in just a few hours.

“Forget all this!” I said to myself, except using a different f-word. “I’m going to announce my candidacy on stage.”

The amygdala army went crazy: “You just told everyone you weren’t running!” “You don’t have time to prepare!” “This is nuts!” 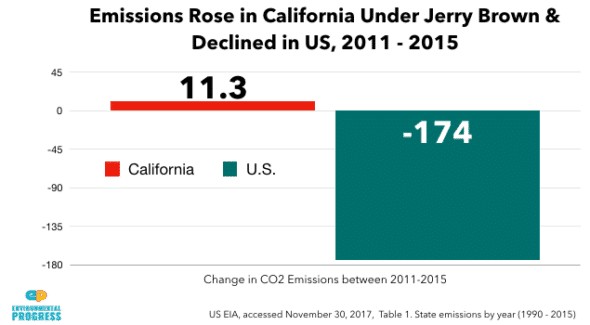 Within 30 minutes I had spoken to, called, or emailed everyone and told them that not only was I running, I was announcing in a few hours.

Most just laughed, and almost all were encouraging. “Go get ‘em,” said Kristin. Madi laughed and the said, “We were all kinda disappointed when you decided not to run.”

By the time I arrived at the New York Times ClimateTech event, I was filled with fear. But it was a familiar fear — the one I get whenever I speak publicly.

And I was still full of doubtful voices. But my relationship to them had changed.

I am no longer afraid of my doubts. On the contrary, I have a newfound faith in them.

Where would any of us be without our doubts and fears? They demand answers from us and aren’t satisfied until we come up with good ones.

But it’s faith that sustains us when the answers are slow to arrive.

What will it take to “win” in California? A lot more than winning the governor’s race. After that we will need to enact sweeping reforms.

Getting from here to there will require fighting and winning a series of battles. It’s going to take years and perhaps decades.

We’ve achieved steps one, two, and three. We launched our candidacy. We’ve won endorsements from the ecomodernist and atomic humanist movements. And the mainstream media is taking notice.

Soon we will release our platform, and start to demand action.

Do you doubt we can win?

But I also have faith.

The above was first published under the title of My faith in doubt: Why I’m running for governor, part three. It is republished here with permission.