A few days ago, a retired economics professor named John Blackburn and a student named Sam Cunningham who is seeking a Masters of Environmental Management published a paper commissioned by NC Warn, an organization that, in its own words, is “tackling the accelerating crisis posed by climate change — along with the various risks of nuclear power — by watch-dogging utility practices and working for a swift North Carolina transition to energy efficiency and clean power generation.” 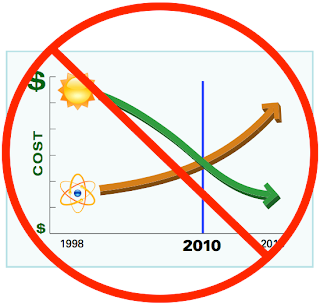 The paper is seductively titled Solar and Nuclear Costs — The Historic Crossover: Solar Energy is Now the Better Buy. The paper’s cover has a dramatic and colorful graph that shows ever increasing costs for nuclear and ever decreasing costs for solar. The lines cross in 2010. (I will explain my use of the word “seductive”.)

For their nuclear power cost projections, the professor emeritus and his grad student relied on a 2009 cost projection paper written by a lone researcher named Mark Cooper, whose current employment is described as “Senior Research Fellow for Economic Analysis” for the Vermont Law School Institute for Energy and the Environment. His brief biography states that he has a “PhD from Yale” but it does not specify his field of study. It indicates he is an “activist/advocate” with a rather wide range of interest areas including telecommunications regulations and energy consumer issues.

Update: (Posted August 4, 2010 at 0448) Mark Cooper’s CV is available on-line as part of a testimony that he provided on June 5, 2006 on behalf of Consumer Federation Of America, Consumers Union, Free Press, AND USPIRG in the case of a then proposed merger between BellSouth and AT&T. Cooper’s CV follows page 77 of the posted testimony. On page one of that CV, Cooper’s education is listed as Yale University, Ph.D., 1979, Sociology; University of Maryland, M.A., 1973, Sociology; City College of New York, B.A., 1968, English. His PhD dissertation about Egypt formed the basis for a book titled The Transformation of Egypt. End Update.

The paper ignores all other cost projections for nuclear. Some of the previous work on this topic that the professor and his graduate student ignored includes the following: 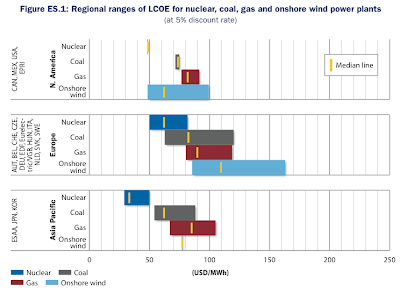 For the cost of solar electricity, Blackburn and Cunningham relied on reported offers of “commercial scale” solar electricity at a certain price to the grid supplier – without noting that those offers are on a strictly “when available” basis that is also take or pay.

Here is an analogy – if you happen to grow tomatoes in your yard, imagine going to your local grocery store and demanding that the grocer pay you the same price that he charges at retail. The grocer must take all of the tomatoes that your garden produces, but you make no promises about how many you will bring each day. When you want to eat tomatoes at home, but your garden has not produced any, you expect to be able to walk into the store and purchase all of the tomatoes that you need at the same price that you sold them for. (Actually, this is not a very good analogy, because on page 11 of their paper, Blackburn and Cunningham admit that certain solar electricity suppliers will actually be paid a “subsidized” rate of 19 cents per kilowatt hour, which is almost two times the residential retail price in North Carolina of 10.5 cents per kilowatt hour.)

In addition to failing to mention the terms and conditions under which electricity is being offered, Blackburn and Cunningham bury a few “minor” details about solar electricity real costs in an appendix. As they admit in a section that few people will read, the price that some installers are talking about charging utilities is the “net” price – after they receive and bank all currently offered payments from other taxpayers and after they have obtained taxpayer subsidized 25 year amortization, tax free loans. In North Carolina today, a homeowner who purchases a solar energy system receives a 30% cash grant from the federal government and a 35% cash grant from the state government.

Using the example provided in the paper, those cash payments turn a 3 KWe (max capacity), $18,000 system that produces electricity at 35 cents per kilowatt hour (if financed at 6% interest for 25 years) into a system costing the homeowner just $8,190 and producing electricity for a total of 15.9 cents per kilowatt hour – when the sun is shining. Of course, that means that the homeowner has received a grant of $9,810 from his or her neighbors, some of whom may not own a home (renters) or even own a roof (condo and apartment dwellers). Blackburn and Cunningham admit that they did not include energy storage costs of any kind (pg 11).

I promised at the top of this blog that I would explain my use of the word “seductive” and I guess I should also explain the word “gullible” that I used in the post title. Solar electricity has a warm and fuzzy reputation. Everyone would love it if we could capture all of the energy that we needed from the sun with little initial expense. We would love it if solar panels really did last for 25 years, even though many fail much earlier than that, especially if they are blown away by the kinds of storms that occasionally occur in a place like North Carolina. Therefore, an announcement by a seemingly credible source like a “professor” that solar electricity has actually become cheaper than nuclear might be cause for celebration and attention from major news sources. That is the seductive part.

The gullible part is that a normally credible news source, the New York Times, apparently did not bother to more fully investigate the credibility of the “study” to find out that it is just a paper that was commissioned by an organization that is dedicated to a well publicized agenda. On July 26, 2010, on the front page of the New York Times business section, there was a Special Report: Energy titled Nuclear Energy Loses Cost Advantage written by Diana S. Powers whose conclusions about electricity cost comparisons between nuclear and solar were entirely based on the Blackburn and Cunningham paper and its sources. The writer did not check on the academic credentials of the paper’s authors, check to see if it had been peer reviewed, or question whether or not it was backed up by independent work by anyone else. She quite possibly did not even read the entire paper to understand the calculations used to draw the pretty graph. The editor allotted a good deal of valuable space for this poorly researched work.

So far, it does not look like many other major media sources have picked up the story. I certainly hope that they take a much harder look at reality before they do, and address some of the glaring weaknesses and established agendas that are the real reasons that the paper was written and widely spread through certain portions of the blogosphere.

Greentech Media – 2011: The Return of the Solar Shakeout (Warning: This is a lengthy, complex article detailing the solar industry’s deep financial dependence on subsidies and feed in tariffs.)

Update: (July 30, 2010 0158). Fast Company article dated July 29, 2010 – Is Solar Power Now Cheaper Than Nuclear Energy?. It looks like Ariel Schwartz has also been gullible or guilty of sloppy reporting. The sloppiness shows up in the second sentence when she describes an NC Warn sponsored document written by a RETIRED professor from Duke University and a student working on his masters degree in the following manner: “The analysis, which comes from a Duke University report entitled Solar and Nuclear Costs: The Historic Crossover, claims that, “Electricity from new solar installations is now cheaper than electricity from proposed new nuclear plants” in North Carolina.” If I represented Duke University, I would be getting on the phone to ask the publication to print a correction that clarified the source of the document. If I published Fast Company, I would direct my editors and reporters to be a bit more careful with fact checking.

Editors’ Note: August 3, 2010
An article published July 27 in an Energy Special Report analyzed the costs of nuclear energy production. It quoted a study that found that electricity from solar photovoltaic systems could now be produced less expensively than electricity from new nuclear power plants.

In raising several questions about this issue and the economics of nuclear power, the article failed to point out, as it should have, that the study was prepared for an environmental advocacy group, which, according to its Web site, is committed to ‘‘tackling the accelerating crisis posed by climate change — along with the various risks of nuclear power.’’ The article also failed to take account of other studies that have come to contrasting conclusions, or to include in the mix of authorities quoted any who elaborated on differing analyses of the economics of energy production.

Although the article did quote extensively from the Web site of the Nuclear Energy Institute, an industry group, representatives of the institute were not given an opportunity to respond to the claims of the study. This further contributed to an imbalance in the presentation of this issue.

Though this note did not mention the importance of federal and state direct subsidy payments and it is debatable whether or not there were “extensive” quotes from the NEI web site, it is reassuring to see that the editors were concerned enough about the sources used to print that comment. If anyone has access to the paper edition of the Times, please let me know if there were any retractions or corrections printed there.