In the modern world, countries need a reliable electricity grid to prosper. Globally, demand for electricity is growing as a result of population growth, new ways to use electricity, and the effort to spread access to electrical power to a greater portion of the world’s population.

For the past four years, Robert Bryce has been intensively studying the electricity business, which he describes as the world’s second largest industry by revenue, trailing only the fossil fuel industry. He calculates that global annual electricity sales total approximately $2 trillion. He traveled to a number of different locations to learn how countries, states, cities and even individual businesses are creating, transmitting and using electricity.

His resulting book, A Question of Power: Electricity and the Wealth of Nations, was released on March 10, 2020. By the time it had been released, the world was in the throes of responding to the coronavirus and his well-planned book tour had been essentially cancelled.

I had the opportunity to talk to Robert to find out what he had learned about the electricity business and to to discuss some of the key findings in his book.

We discussed the big five in data processing – Alphabet (Google), Amazon, Apple, Facebook and Microsoft – and how their electricity needs have affected each one’s business decisions and location preferences. Together, they are already using 20 terawatt hours per year.

We talked how legal and black market marijuana farmers often produce their products in intensive, year round, indoor grow operations that consume approximately 800 W per square meter of building space.

We talked about a resort in the Lebanese mountains that obtains all of its electricity from a microgrid with solar panels and lead-acid storage batteries.

And we discussed the paradigm-shifting development of Oklo’s Aurora powerhouse and the company’s recently announced application for a combined license to build and operate the showroom floor model of the facility sometime before the end of 2024.

We also discussed the continuing importance of coal as an electricity generating fuel, the growing importance of natural gas, the impressive and successful effort to reduce the cost of wind and solar as generating sources, and the importance of nuclear energy today and in the future as all countries seek to improve the cleanliness of their electrical grids.

I think you’ll enjoy this conversation. As always, your feedback and commentary are welcome.

Late last week, while many observers were focused on a long weekend of religious celebrations with friends and families, there were several announcements made in the slowly developing crisis in the American electricity supply system.

Operators of a number of several large power plants with the ability to produce electricity night and day, wind or calm, pipeline or no pipeline, declared that they are planning to retire those plants. The companies making the announcements will either jump on the bandwagon trend of producing electricity using more fragile sources that depend on the weather or the hour by hour whim of the speculative fuel market or they will exit the business altogether.

Though I might have missed or overlooked a few important announcements, here are the ones that were the proximate stimulant for this post.

The announcements were not limited to plants using uranium or coal, Exelon’s Mystic Generating Station is near the Everett LNG import terminal and also has onsite distillate fuel oil.

A multi-decade, high-risk experiment, initially envisioned by Ken Lay and his colleagues at Enron, is nearing a potentially painful precipice.

Under current rules, plants that incur the extra costs associated with buying fuel on long term contracts with some buffer capacity on site have seen their revenues fall dangerously close to their ongoing costs. This hasn’t been a short term blip or a market correction; it’s been sustained now for close to a decade.

The duration of the financial stress has been produced by a combination of forces including:

Owners of weather-resistant, fuel-secure power plants have seen their finances stressed and their stock prices fall. That makes it more difficult and expensive to raise the capital required to update and improve their facilities. Projects designed to increase productivity have been deferred or cancelled in the face of low prices; there is insufficient return to justify the investment.

Some capital projects cannot be legally deferred any longer; they are driven by changes in regulations put into effect to improve cleanliness or public/political safety perceptions.

In the case of required changes that need capital investment and often demand a period with no revenue generation during installation, companies have few options other than to retire their facilities.

Resources that were once directed towards long term technological advances have disappeared.

For example, First Energy was once one of the utility leaders that was deeply interested in small, modular reactors. They disbanded the group that invested in nascent engineering efforts and stopped sending representatives to the industry gatherings.

Instead of planning for a more prosperous, cleaner and abundant future, the company leaders have been forced to work on mere survival. That effort appears to be failing. While there are some cheering the company’s demise, there should be a lot of customers worrying about what comes next.

While it’s true that some of this situation appears to be part of a normally functioning market that uses price signals to help participants determine opportunities and capacity choices, there is little doubt that the electricity market has been structured (some might say “rigged”) with little consideration of the system’s long term planning needs.

It appears likely that the structure, unless changed soon, will produce an outcome that will impose significant widely-felt pain along with oversized gains for some well-positioned few during the correction. After enough reliable generation capacity has been retired, the gas supply glut will disappear. Periods of increased demand or interrupted supply caused by inevitable storms, weather fronts, or even purposeful attack will lead to painful prices and demand destruction.

Of course, high prices are not painful for everyone. They are exactly what “the market” depends on to encourage new supply. Unfortunately, while short term price spikes provide rich payoffs for well-timed speculation, they are difficult to use to convince long term investors that there is an opportunity for sustained income over a lengthy period of time.

That means that any new supply will be something that can be quickly and inexpensively installed. There are usually a number of reasons why some equipment is significantly cheaper than other equipment that appears capable of performing similar tasks. Most successful people avoid cheap goods; that is often part of the basis for their continued success.

Among those who write about this topic in most popular media venues, I’m in a worried minority. Many seem to believe in the current structure. Perhaps they are just confident that it will benefit their associates and their favored technologies. They often point to a study of power failures over a five year period and claim it “proves” fuel supply constraints rarely contribute to power outages.

As a person who came of age during the 1970s and who has studied the world’s fascinating and complicated fuel supply industry history I believe their conclusions were made with carefully imposed blinders that didn’t include some disruptive, dangerous and transformative periods in human history.

Some might say that the coming disruption will be a good opportunity to stimulate the deployment of newer, better, and more efficient technology. As a long-time advocate of new nuclear plant construction, perhaps I should stop sounding the alarm and simply maneuver to be ready to help pick through the wreckage.

The fact is that I am not standing on a distant shore watching the developing crash. I live, work and play here in America. So do the vast majority of the people I love and or know. I can’t just watch, so I’ll have to keep doing whatever I can to sound the alarm in time to make a course correction.

If it works soon, most may never notice and will wonder what I was so worried about. The longer we wait, the more radical the turn will have to be. 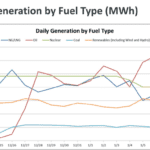 The Independent System Operator for the New England power grid (ISO-NE) has produced a summary brief describing the challenges associated with Arctic Outbreak 2017-2018, a period of substantially below normal temperatures that lasted from Dec.25, 2017 until Jan. 8, 2018. After describing the intensity of the cold wave with a number of graphs, charts, images […]

Greentech Media recently published another article claiming that there is a new report that supports its contention that the NOPR – Notice of Proposed Rulemaking to establish a Grid Resilience Pricing Rule – Sec. of Energy Perry sent to FERC is misguided. I cannot help but wonder if the author read the report. If he […]