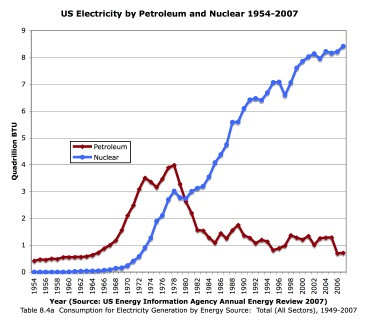 Many observers, perhaps even most observers, claim that the growth of nuclear power has nothing to do with oil consumption. They claim that nuclear power is limited to electrical power and that there is very little oil used to generate electricity. I want to dispel that rumor right now. Since I do not have a source of data for international consumption, I will focus on the US, but the point should be pretty clear.

Here is my challenge – after you take a good look at the graph, tell me if you still believe that nuclear power has nothing to do with oil consumption and with the profitability of petroleum suppliers. Tell me if you really believe that oil producers have no reason to fear the impact of a vibrant nuclear industry on their bottom line. Tell me if you really believe that the leaders and strategists in the companies and countries that depend on selling petroleum did not already figure this out and take action to reduce the effect.

History lesson – The Background Behind the Atomic Energy Act of 1954

In December 1953, President Eisenhower gave his famous Atoms for Peace speech to the United Nations. In 1954, his administration established a program to enable nuclear fission to be used in electric power plants. They worked with Congress to replace the Atomic Energy Act of 1946 which had established a policy of attempting complete US government monopoly on the ownership of all nuclear materials and most nuclear knowledge. The Atomic Energy Act of 1946 has often been described as the an act designed to establish civilian vice military control over the atom, but from in either case the policy was that the US government was in total control.

The Atomic Energy Act of 1954 enabled some private ownership of nuclear materials and established a system of regulation. Since there was a recognition that the utilities were not structured in such a way as to fund the development of a completely new technology, and since there were government bodies that controlled a large portion of the available skilled work force, the Eisenhower Administration decided that it would prime the pump and build the first commercial scale nuclear generating plant in cooperation with industry and established utilities.

Groundbreaking for the Shippingport Atomic Power Station took place on Labor Day, 1953, and the plant reached full power operation in late December 1957. The plant operated until 1982. Reactors that evolved directly from the Shippingport design make up about 2/3 of the nuclear power plants in the US and about 3/4 of all nuclear plants in the world.

One of the main motivators in Eisenhower’s drive to use the atom for peaceful use was his clear recognition that the world needed energy supplies that did not come out of the volatile Middle East. Though people with short memories think of the difficulties in energy supply dependence as something that started in the 1970s, Eisenhower had several opportunities during his 8 years in office and his 40 plus years as a military leader to learn just how vulnerable the world was to energy supply disruptions because of power struggles over the vast petroleum resources in the Middle East.

While Eisenhower was leading allied forces in victory against the Nazis, he received countless briefs about the importance of controlling energy supplies and knew first hand that armies and economies do not work well without fuel.

One crisis in particular might have played a large role in his determination to make nuclear power a real alternative to oil for power ships and for providing vital electricity. In 1956, Egypt nationalized the Suez Canal and nearly strangled oil supplies to European allies like France and Great Britain. Eisenhower sent an envoy to Saudi Arabia to tell King Saud to avoid using oil as a weapons since we had a nuclear alternative. Eisenhower was smart enough to know that the threat would be empty unless actual hardware was in the works to make it real. There is a good reason that there were so many naval vessels, a commercial nuclear ship, and the Shippingport reactor built just a few short years in the late 1950s.

There was even a poorly run and ultimately unsuccessful nuclear aircraft project. Just imagine what the world would look like today if that project had shown that there was a way to airplanes that could operate for years without producing any emission or consuming any fossil fuels. Perhaps there were people more interested in making money from selling oil at airports and from building arial refueling tankers than in taking technological strides for real national and world security.

BTW – the specific reason for posting this today is that I just read a thought provoking post by Charles Barton on Nuclear Green titled A Response To Rod Adams. There is some background to this post, but Charles did a good job in weaving in the context in his answer to a comment that I had made a few days ago. One comment in his post encouraged me to do something that I have been meaning to do for a very long time – produce a graph that exposed the lie that nuclear does not impact oil.

Here is the quote from my friend, Charles, who otherwise has a good understanding of nuclear power history:

I really do like this public discussion forum that mixes and matches blog entries and particularly interesting comments on the subsequent posts. I hope you do as well.

One of my goals with this blog is to help people to understand that the energy debates are not just a discussion about technology – it is also a very important financial “game”. Unfortunately, it is very difficult to tell which “team” many of the participants in the energy are on – there are a…

When I am not listening to podcasts on my daily commute, I often turn to NPR (National Public Radio) for some thoughtful stories. Though I missed yesterday’s edition, a friend sent me a link to an interesting story titled Face-Off Over ‘Fracking’: Water Battle Brews On Hill that describes the growing concern in some areas…

One of my favorite readers – you know who you are – let me know that the Wall Street Journal Environmental Capital Blog is talking about small reactors today. You can find the article at Proliferate! Are Many Small Nuclear Plants the Energy Answer?. They are not the only ones mentioning this idea in the…

A March 5, 2007 article titled Countdown to climate change had some favorable comparisons between nuclear power and other possible new energy sources. Geosequestration is further away and arguably more unsafe than the nuclear option. Its problems include: there is no evidence to show it can be done on a commercial scale; nobody knows what…

There were two contrasting announcements of decisions on the fate of silent, but potentially productive nuclear power stations in the past week. On the positive side, the Tennessee Valley Authority’s board of directors included $248 million for engineering, evaluation, maintenance, preservation, establishing a regulatory framework, and long lead time procurement of items needed to finally…

Last Thursday night I had the pleasure of spending the evening with the Michigan chapter of the American Nuclear Society. Despite the cold and snow, there was a good turnout and I had the chance to speak to a number of friendly and interested people during the pre dinner attitude adjustment period. Following the dinner,…