Sir James Dyson, known to housekeepers around the world as a creative problem solver, has announced that he will be investing £1 billion ($1.3 billion) to develop a premium electric car and an equal amount of money on solid state battery development. The battery effort is key to his automotive dreams, and his star player and not-so-secret weapon in the crowded field of advanced battery technology development is Ann Marie Sastry, a former professor at the University of Michigan who left in 2012 to focus on her battery startup Sakti3.

The vacuum cleaner mogul has been interested in building cleaner automobiles since at least 1998 and is investing in a serious effort that should be putting cars on the road by 2020. The primary design detail released about the car Tuesday is that it will not be a sports car. Dyson also revealed that the car project began in 2015, that it employs about 400 engineers, that its total project budget is on the order of £2.5 billion and that it is being developed in Wiltshire, where the company recently purchased a former WWII RAF base to provide room to expand its British research and development arm.

This article will focus on the battery technology development.

In addition to the technical expertise of Sastry and the portfolio of patented technology that has been developed by her Sakti3 team, there are a number of synergies that give Dyson’s privately held, family-owned corporation formidable capabilities in manufacturing lightweight, energy dense batteries.

Sastry, who earned her PhD in Mechanical Engineering in 1994 from Cornell University, did the math and agreed with a number of other researchers in chemical battery development that the energy density of Li-ion batteries could be improved by a factor of 2-3 by replacing the liquid electrolyte with a thin film of solid material.

As a mechanical engineer, she recognized that the key to enabling the technology to serve a mass market would be focusing on improvements to the process of depositing the thin films to enable economic manufacturing on a large scale. She and Sakti3 have attracted a lot of attention from technology observers, politicians and from major investors like GM Ventures, Kholsa Ventures and Bering LLC. In March 2015, Dyson joined the other backers with a $15 million investment in Sakti3.

“Dyson is a scientist, and he reached out to us,” Sastry told Crain’s. “He’s been very good at taking new technologies and integrating them into products, and they have a very strong need for better batteries.”

By October of 2015, Dyson had learned enough about Sakti3 and its leader to buy out the rest of the investors and offer all of the employees a job with his company. Sastry remained as the president of the unit.

“Dyson is a global heavyweight but still operates in many ways like an agile startup in its technical pursuits, and particularly in the way they bet on new technology,” Sastry told Crain’s. She added: “It was a complete win-win, a profitable exit for all involved. But not just an exit, a very nice entrance for all of us into the next phase of development.”

Though Sakti3 batteries are not yet on the market as a stand-alone product, the company has announced that it has achieved an impressive energy density of 1143Wh/liter.

Unlike Elon Musk, James Dyson has a track record of developing successful, profitable, manufactured consumer products. His privately held company, which sells vacuum cleaners, hair dryers, air purifiers, energy efficient lighting and hand dryers, recently announced ordinary and preferred share dividends of £111 million for 2016. Nearly all of that was paid to Dyson and his family. Forbes estimates his net worth to be $4.5 billion.

He chose to invest in Sakti3, not for a distant payout, but because the company had developed a technology that he could bring to market quickly as game changer in a business he was already in – manufacturing and selling high value cordless appliances.

When I learned about Dyson’s announced investment in battery technology development linked to electric cars, I remembered that the company had been advertising cordless vacuum cleaners that caught my attention.

(I’m the vacuum cleaner operator in our house; we have a 6 year old Dyson that has provided excellent service. The company earned my respect with the roller head failed after 4 years and 11 months; the replacement part was delivered in about 3 days under the original 5 year warranty. Both of my 30-something daughters also use Dyson vacuums, partly based on my praise of the products.)

The company’s newest models of cordless vacuums include an impressive upgrade in battery performance. The motor is 30% more powerful, but the battery lasts twice as long. Though the newest V8 models are slightly heavier than the previous, less powerful model, it doesn’t appear that the company simply added a bigger battery. Not only is the motor more powerful, but there is a larger dust reservoir; those changes likely explain the 12 ounce weight gain.

Unlike the portable computers that represent a significant portion of the traditional Li-ion battery market, cordless vacuums with a high power boost mode are a good proving ground for the type of duty cycle that will be typical in an automotive or grid storage application.

It looks like the Sastry-Dyson duo is a force to be reckoned with in the battery market.

Many advocates of unreliable power sources like wind and solar blithely toss out the concept of “storage” as the panacea that makes their favored energy sources viable competitors in the potentially lucrative business of supplying on demand power. I’m skeptical because I have some experience with operating and budgeting for power systems that use batteries…

As part of the discussions stimulated by their airing of Pandora’s Promise, CNN hosted a debate between Michael Shellenberger of the Breakthrough Institute and Dale Bryk of the Natural Resources Defense Council. That debate included some commentary that I thought was worth promoting to the front page. A commenter named Fred, a tech who has… 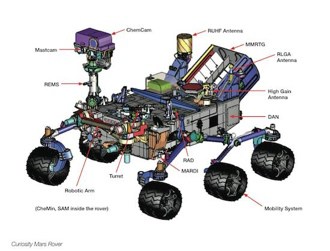 I have been fascinated by radioisotope thermal generators (RTGs), aka nuclear batteries, ever since I saw a display at the Maryland Science Center in Baltimore’s Inner Harbor sometime in the early 1990s. In that energy exhibit, there was a tiny RTG that was designed to power a cardiac pacemaker. What impressed me the most was…

During the holiday weekend, I finally got around to watching “The Martian.” Though it was a terrific, suspenseful drama, its treatment of the radioisotope thermal generator (RTG) was wrong on a number of levels. That was disappointing in the context of a high budget movie that has received numerous kudos for the significant effort its…

It should surprise no one to learn that Elon Musk, a master of promotion, is capturing worldwide media attention Friday for Tesla’s selection as the winning bidder for a project to install “the world’s largest grid-scale battery” in South Australia. It also shouldn’t come as a surprise to anyone who pays attention to claims made by…