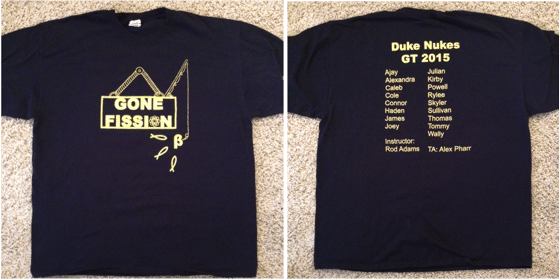 As mentioned a few days ago, I spent the first three weeks of July teaching Nuclear Science to a group of interested, bright, open-minded teenagers who have the inherently questioning attitude that makes working with them so rewarding. We got to know each other pretty well during the nearly 100 hours of class time that we spent together. We were able to cover — to a varying level of detail — a wide range of topics, from the history of the discovery of radiation, to the development of beneficial uses of radioactive materials in industry and medicine, to the development of fission power reactors, the testing of atomic weapons, the health effects of radiation doses from high to low, the siren song promise of energy from nuclear fusion, careers available in nuclear science and technology, and advanced medical imaging and treatments using radiation and radioactive materials.

The students had the opportunity to watch Trinity and Beyond, Pandora’s Promise, Einstein’s Big Idea, Our Friend the Atom, A is for Atom, and a BBC documentary on the life of Marie Curie. We used visuals from posted videos on various nuclear reactor designs, looked for radioactive sources using Geiger counters, saw a sub-critical experimental pile, and talked to a grad student who was using a high bay shielded room to test a quad copter programmed to perform radiation surveys. Lisa Styles, a senior evaluator from INPO in Atlanta, visited the class to talk about careers in nuclear technology and Leslie Corrice, the well known Fukushima event expert, visited via Skype to share some little known information about the event and its aftermath.

One regret caused by the tight daily schedule of the program was that we were within a three hour drive of the Vogtle 3 & 4 construction site, but unable to visit and tour. We had to substitute photos and videos instead. We were also limited by the lack of a research reactor at GA Tech; there was one there until it was defueled in preparation for the 1996 Olympic Games. Apparently there were people who were worried about the nuclear reactor safety implications of international terrorism even then.

Even though the Neely Reactor facility was relicensed in 1997, it was never started again after the Olympics. There was a declining interest and enrollment in Nuclear Engineering, the reactor was underutilized, and the fuel had already been removed and transported to the Savannah River Site.

Here is a photo of most of my class (15 out of 17) taken during a break from the final dance. (They gave me permission to share this. They were pleased to find out that I had written a little about our time together already.)

One of the features of a Duke TIP experience is creating a class tee shirt. I was impressed by the design that the Nukes created; I will proudly add this shirt to the collection of shirts I wear at public meetings.

I hope I’m invited back. It was a blast and a stimulating intellectual challenge to spend so much time sharing knowledge with such interesting young people. I freely admitted my strong biases about atomic fission and radiation, but told the students that I enjoyed students who asked hard questions and stubbornly probed the bases of my assertions.

Some of you might have been missing irregular, but frequent, updates here on Atomic Insights for the past few weeks. You may have wondered why most comment threads have been closed. You may have even noticed that the Twitter tool in the right hand column didn’t include any new tweets for days on end. I…

As I talk with other “nukes” at conferences, on the web and in other social circumstances, I often get into political discussions. I know – you are supposed to avoid politics, religion and sex in social circumstances, but I guess I never really accepted the idea that one should avoid all interesting topics as a…

On May Day, I spent an enjoyable 25 minutes being interviewed by Adam Curry as a guest “savant” for the Daily Source Code. Adam has been intrigued by my advocacy of nuclear plants safe enough to be surrounded by people – he called the show Backyard Nukes and posted it on May 2, 2007. It…

Duke Energy, Ameren, US Navy Nuclear Power Program, Dominion On February 29, 2008, I visited the American Nuclear Society Student Conference 2008 Career Fair and talked to a number of organizations that had booths set up to find out what kind of opportunities were available. I tried to get a reasonable selection of contractor, government…

On show 39, Shane and I talked a bit about Polonium and the Litvinenko poisoning. A friend of mine sent me a link to a useful article in the Toronto Star titled Killer radiation safer than you think. If you want to learn more about the substance, its uses and risks, this is a good…