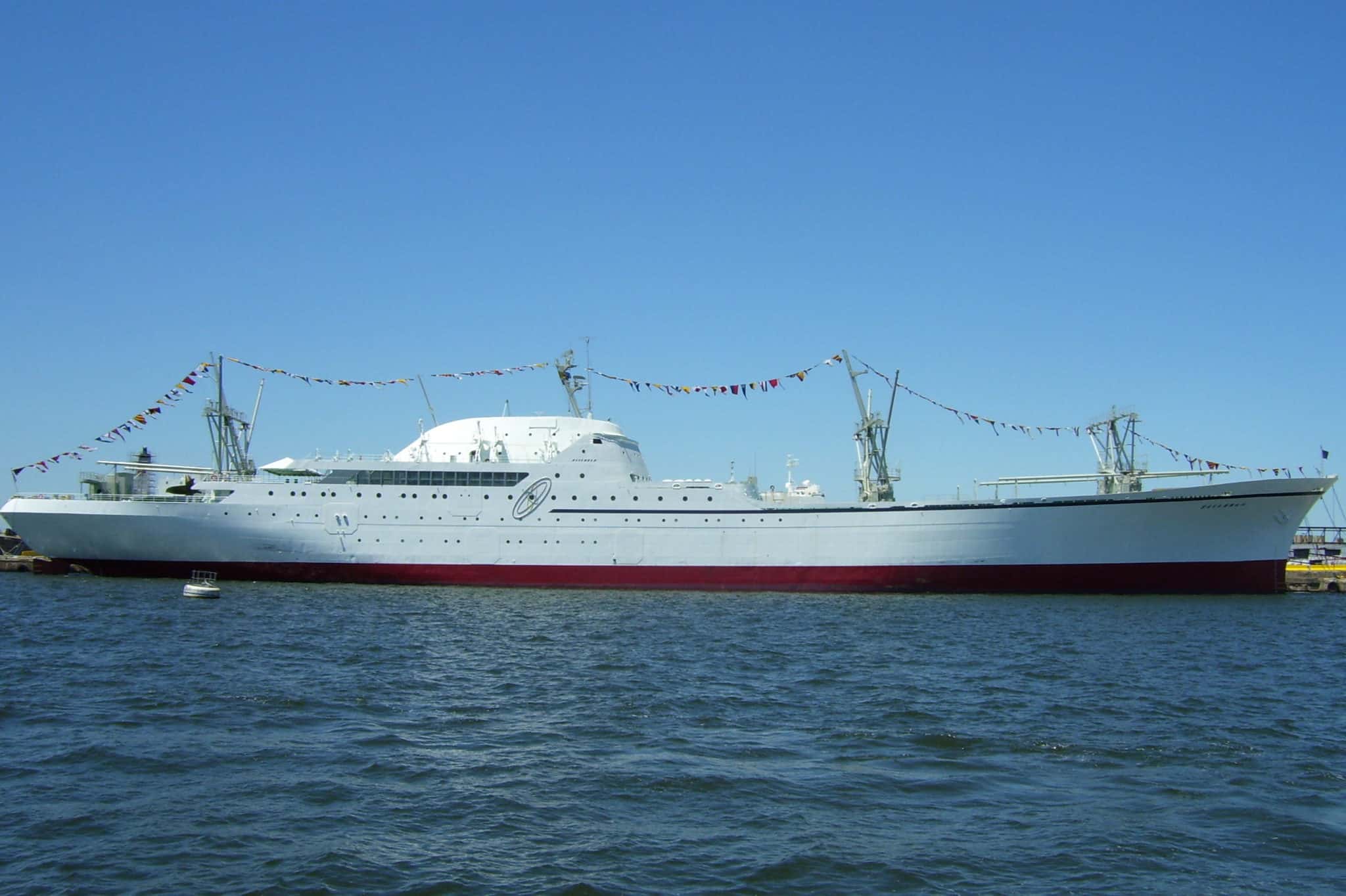 (Post was originally published on July 1, 1995. It was updated on April 2, 2011 to include information and videos that were not available in when it was first written. The title has also been revised to open up a new discussion – was the NS Savannah a failure or a successful demonstration of a technology whose time has not quite arrived?)

On Friday, March 23, 1962, the N.S. Savannah became the first nuclear merchant ship at sea. In 1972, after ten years of demonstrations and operations, she was laid up in an effort to reduce spending by the Maritime Administration.

In the lore of the nuclear industry, her early retirement proved that nuclear power was not a viable option for commercial shipping. Once again, Atomic Insights will discuss why we believe that the conventional wisdom is wrong.

Most people who are aware of the experiment do not understand what the N.S. Savannah was designed to do. Her planned mission was to prove to the world that the United States was committed to the proposition of using atomic power for peace and to show that a nuclear reactor could be used to power a commercial ship. She was never intended to be profitable. The details of Savannah’s design and operational history offer some valuable lessons for future nuclear ship programs.

Update: (Added April 2, 2011) In the second of the news clips in the below video, you will hear the specific statement made that the ship was never intended to be an economic commercial proposition. Even when the ship was being launched, American taxpayers were informed that she was conceived and built to be a pioneer. At that time, people were comfortable with the idea that governments sometimes invest in new ideas and new demonstrations of technology. End Update:

By technical measures, the ship was a success. She performed well at sea, her safety record was impressive, her fuel economy was unsurpassed and her gleaming white paint was never smudged by exhaust smoke.

A Lady at Sea

Savannah was visually impressive. Her hull was streamlined, looking more like a luxury yacht than a bulk cargo vessel. Even her cargo handling equipment was designed to look good. Maritime historians often comment that she was “the prettiest merchant ship ever built.”

Her interior was also not typical of bulk freighters; she was endowed with 30 air conditioned staterooms, each with an individual bath, a dining facility that could seat 100 passengers, a lounge that could double as a movie theater, a veranda, a swimming pool and a well stocked library.

She was a fast ship with incredible range. With her 20,000 horsepower nuclear engine her top speed was 23 knots. Savannah was capable of circling the earth 14 times at 20 knots without refueling.

Savannah was not well endowed with cargo space. Her holds could accommodate just 8,500 tons of freight in a total space of 652,000 cubic feet. Many of her competitors were able to transport several times as much cargo. Her streamlined hull made loading the forward holds a labor intensive proposition, which became a significant disadvantage as ports became more and more automated.

Her crew was larger than comparable oil powered ships (67 compared to about 50). Her budget included the maintenance of a separate shore organization for negotiating her port visits and a personalized shipyard facility for completing any needed repairs.

The crew was trained in special schools after completing all training requirements for conventional maritime licenses. The number of people sent through the training and attributed to the Savannah’s books indicates a plan for the eventual construction of additional nuclear steam ships.

Anyone familiar with the bulk shipping market could immediately recognize that a ship with Savannah’s characteristics could not be a commercial proposition. Her passenger space was wasted while her cargo capacity was insufficient.

Having a unique propulsion plant increased the cost of repairs and spare parts relative to machines with a larger installed base of customers. The large crew of hand-picked people added even more costs. Expecting her to make money as a bulk freighter was like expecting an auto show concept car to make money as a jitney taxi.

Condemned to a Short Life

In the words of Robert J. Bosnak, a former officer in charge of the Marine Inspection team that regulated the Savannah, “The Savannah performed well from an operational point of view, but in my opinion her designers condemned her to a short life by her hybrid design as a passenger-cargo vessel. Neither function of the ship proved to be economically viable, and MARAD (Maritime Administration) chose not to spend additional monies to convert her to an all cargo, or an all passenger vessel, but instead removed her from service. I regret that this happened.”

As a result of her design handicaps, Savannah consumed approximately $2 million more per year in operating subsidies during her four year career in international trade than a similarly sized Mariner class ship with an oil heated steam plant. This extra subsidy became a target for economy-minded legislators.

In 1972, when Savannah was laid up, the cost of a ton of oil was about $20.00. A ship with a 20,000 horsepower engine using 1970s technology would have burned about 120 tons per day for a daily fuel cost of about $2,400. By early 1974, following the Arab Oil Embargo, a ton of bunker fuel cost about $80.00. That same ship’s daily fuel bill would have suddenly increased to more than $9,000. Savannah’s fuel cost would not have changed as a result of the Oil Embargo. If the oil-burning ship operated for 330 days per year (which is common in the world of merchant shipping), the increase in its annual fuel expenditure would have more than eliminated the difference in Savannah’s operating costs, even with all of her inherent disadvantages.

Update posted on March 31, 2009: The N/S SAVANNAH ASSOCIATES, INC. has just posted a beautiful web site with historical details about the ship, her history and the current effort to recondition and protect her. If you are interested in learning more or in signing up for a mailing list of people interested in the ship, visit www.nssavannah.net.

Update posted on April 2, 2011 I found this interesting trailer, but have not yet determined if the advertised video project was ever completed. If you know anything about this project, please share the information with the rest of us.

An acquaintance took this photo of NS Savannah during the 50th anniversary in the summer of 2009. The ship remains docked in Baltimore where it is occasionally possible to arrange tours with the Maritime Administration people who are in charge of keeping her in a SAFESTOR condition. If you are interested in making contact with the right people, please let me know; I do not want to set my contacts up for spam email by publishing their address here.

PS – just in case you were wondering why I chose to republish this historical post in April 2011, I suppose it is because I have been thinking a lot recently about convincing people that nuclear energy can make a difference in oil consumption. By increasing the supply of energy available to perform tasks that are currently done by burning oil, it is possible to shift the supply/demand balance back in favor of consumers to drive down the price paid to producers.

If you think that energy should be expensive to encourage conservation, perhaps we should think about adding taxes to it; at least that way, the increased revenues from the excessively high prices do not mainly benefit Saudi princes, multinational investors or Russian oligarchs.

Update April 2, 2011 4:45 pm I found one more video that might be of interest. Someone apparently converted an old 16mm film taken on board the NS Savannah while underway in 1964 into a clip to share on YouTube. I recommend watching with your speakers muted – the 16 mm film machinery noise is a bit irritating.

At 12:30 am, on August 26, 1977, the operators at the Shippingport Atomic Power Station began lifting the central modules of the experimental breeder reactor core into the blanket section. At 04:38 am, the reactor reached criticality. During the next five years, the core produced more than 10 billion kilowatt-hours of thermal power – equivalent…

On Sunday, December 2, 2012, I gathered together a group of nuclear professionals to talk about the impact to human history of the construction and operation of Critical Pile 1 (CP-1). That simple assembly of graphite, uranium, and uranium dioxide was built in about 6 weeks. When measurements taken during construction indicated that the system…

Ray Haroldsen is an atomic pioneer who began working at the National Reactor Testing Station in January 1952. He talks today about his experiences with EBR 1 and the BORAX series of reactor experiments. A good friend of mine contacted me recently and told me that I needed to interview Ray Haroldsen for the Atomic…

John Wheeler, the host of This Week in Nuclear and I got together for a chat about recent developments in nuclear energy. We also talked a bit about a very old, completely decommissioned reactor called BONUS on the west coast of Puerto Rico. Topics discussed during our chat include the development of South Korea as…

The Nuclear Engines for Rocket Vehicle Applications (NERVA) program officially began in 1961, when NASA issued a request for proposals and established the Space Nuclear Propulsion Office (SNPO). Various government laboratories had been studying the concept for several years, several contractors were already working on conceptual design, and space was a big topic of interest….

httpv://www.youtube.com/watch?v=y8CqdECzklI In early 2009 a recently graduated film student and a journalist who grew up on Long Island got together to produce a film about the Shoreham Nuclear Power Plant fiasco. Originally planned as a 10 minute YouTube video, the project grew to what might be a documentary lasting 100 minutes. Rod Adams and Gwyneth…