Some people who fit my category provided the only “downers” during the entire conference. Before I go into all of the things that energized me, I have to share my disappointment with an advertising video shown at the awards banquet by a representative of one of the few nuclear pioneering companies still in business in the US – there was not a single image of a nuclear plant or technology among all of the imaginative products portrayed. That representative was completely upstaged by the dramatic and energetic presentation by a VP of Sales and Marketing who mentioned several times that he was an immigrant representing a company that has decided to establish a strong American presence.

Here are some final attendance statistics that provide a hint of the building momentum in nuclear education in the United States – there were 313 undergraduates, 167 graduate students, and 183 professional members of ANS who took the time out of their busy spring schedules to attend the conference and geek out with others who are also interested in nuclear energy, nuclear medicine, and nuclear politics.

There were workshops on nuclear space applications, nuclear weapons security systems, public outreach, student chapter activities and a tutorial that highlighted “the automated variance reduction capabilities of the MAVRIC sequence using several simple example shielding problems”. (I am not sure I understand much of that quote from the program description of the SCALE demonstration, but several of the students I spoke to were excited enough about that tutorial to have gotten up at 3:30 in the morning on Thursday to catch a flight to make sure they arrived in time to attend that particular tutorial. WOW!) The technical sessions and opportunities to present papers were far too numerous to mention, but if you want a complete list, you can find it towards the end of the conference program. 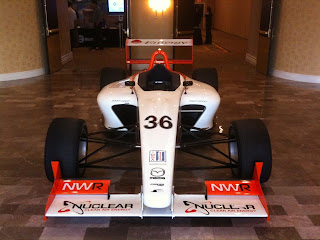 The conference also included a career fair with about 30 booths representing organizations that were taking resumes and conducting on site interviews. There must have been close to a dozen people in Navy uniforms manning a booth that had some terrific photos of submarines and aircraft carriers who were there to explain the benefits of joining the Nuclear Power Officer Candidate Program (NUPOC) that provides an excellent way to finish school, guarantee a good job for about five years after graduation and get paid while still in school.

One of the highlights of the conference was a Public Forum held in an auditorium on the North Campus of the University of Michigan. The idea was to hold an information session at which members of the public could ask whatever questions they had about nuclear topics. The panel members included a regulator, a utility executive, a couple of national laboratory leaders, and a specialist in nuclear non-proliferation. The conference attendees turned out in droves and asked a series of excellent questions, but there were not many members of the public there. My advice to the organizers of the next conference is to schedule any public forums on a campus at a time when there is a better chance of students being available – Saturday afternoon is apparently not the most opportune time for such an event. 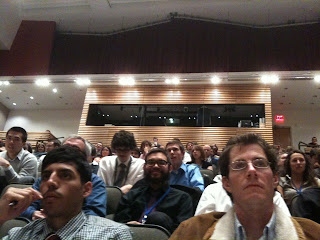 During breaks, meals and social activities, I had the opportunity to chat with a wide variety of students who shared some personal reasons why they had chosen the nuclear field out of the large variety of opportunities open to them. I met a young lady of Russian extraction whose parents moved to the US 4 months before she was born. Her father was a nuclear engineer who could not find steady work in Russia; her grandfather was one of Russia’s pioneering nuclear specialists. We had an excellent discussion about the impact of the kleptocrats who currently run Russia’s oil and gas companies; she was one of the few people I have spoken to over the years who immediately understood my belief that a fair amount of the opposition to nuclear energy comes from competitors in the fossil fuel industry.

I met a young man who had moved to the US after spending part of his youth in Ethiopia; he told me that he viewed his study of nuclear science and engineering as a way to help solve many of the energy and fresh water supply problems that he had personally seen. He also expressed his interest in moving beyond engineering and into marketing; he recognized that all of the technology in the world will not solve any problems if it remains locked up inside laboratories and universities. If he responds to my challenge, I hope to be able to link to a good YouTube video soon.

The marketing topic came up again during a brief conversation with a young lady who had earned recognition for a paper that she presented discussing the lessons she had learned in reviving a public outreach program from her university’s ANS chapter to local schools and community organizations. She told me that she had started school with the intention of becoming a marketing major, but she had followed her father’s advice to choose engineering as a more steady and reliable line of work. She had just listened to Andrew Cook’s dinner talk and recognized that there might very well be a large opportunity to combine her love of marketing with her knowledge of nuclear technology. (Andrew is the Senior Vice President Sales and Marketing for Areva; he is the immigrant that I mentioned earlier who gave a fiery presentation about the growth potential for nuclear energy.)

During breakfast before heading to the airport, I chatted with a fascinating young lady who has earned degrees in both nuclear engineering and public policy. Unlike some of the other students that I met who are second or even third generation nukes, this young woman grew up near Diablo Canyon and attended her first anti-nuclear rally at the tender age of 4. She recalled her curiosity as a kindergardener during emergency drills while watching janitors and teachers apply duct tape around the doors and windows in the auditorium, wondering how duct tape was going to protect her from the stuff that caused her parents and their friends to be so afraid.

Before going to college, she did not support nuclear energy, but decided to study chemistry and nuclear waste as a way of helping to solve a problem that existed already, even if her parents and their friends succeeded in getting n
uclear plants shut down. While in school, she recognized that nuclear energy was more a public policy issue than a technical one, so she began taking additional classes in the policy area. It was while she was in class with people who were certain that windmills and solar panels were going to save the world that she started to realize that the math would just not work to allow that dream to happen. As a woman with a questioning attitude who understands and depends on numbers, she has become a strong advocate for nuclear energy, perhaps to her parent’s chagrin.

My final conversation took place on the bus ride to the airport. I was with a group from the Georgia Institute of Technology in Atlanta who were both excited and nervous about the fact that they had earned the right to host the 2011 ANS Student conference. They are nervous because they understand the time commitment required to host a conference with an expected attendance in excess of 650 people, and they are excited about the opportunity to showcase their university and its programs.

One of the young ladies began her 5 year program (with a direct path to a master of science degree) as a pre-med, but quickly determined that she was interested in medical physics. Like many of the students at the conference, she is a second generation nuke. She grew up in South Carolina near the Savannah River Site and both of her parents have built careers there. She is excited about using radiation to cure cancer and excited about figuring out ways to help people understand that radiation has cured far more cancers than it ever caused.

If you ever have an opportunity to attend one of these student conferences, take it. You will meet some very bright, energetic and exiting young people who can carry on terrific conversations. It will make you feel good to see that there are still plenty of areas of success in American education. It will also make you hopeful to see that the doldrums in nuclear technology in the United States are just about over – if the old white guys in suits can shake loose their siege mentality and begin making firm job offers instead of just talking about how great the opportunities will be in a few years.

A friend pointed me to an interesting video about “Global Dimming”. After watching for a while and then finishing by reading the transcript, I did some more reading and thinking. (There is a good article titled Global Dimming and climate models available on the excellent climate resource named Real Climate) I have just spent a…

I’m excited – it is time to head out for some live contact with young(er) nuclear professional. I will be covering the first-ever Young Professionals Congress, A Hitchhiker’s Guide to a Career in Nuclear in Washington, D. C. today. Maybe I will even capture some of the “dress for success” session on my iPod.

I recommend a visit to both Yes Vermont Yankee and Idaho Samizdat for details, but I wanted to let you all know that the US Nuclear Regulatory Commission has voted to renew the operating license for the Vermont Yankee Nuclear Power Plant for another 20 years. The extension will last through 2032; the NRC has…

Oops – my blog title might have provided a spoiler to the punchline for the below video. Never mind, it is only a minute and a half long, so the there is not much time to build up suspense anyway. However, please watch the video. If you have a blog, consider embedding it; if you…

Though there are plenty of anti-nuclear activists and skeptics who believe that there is no nuclear renaissance in progress, there are apparently a number of large companies whose leaders disagree. I recently received the following press release: Nuclear Construction Summit – October 26-27, Washington, looks at how to identify, control & mitigate risk factors for…

Yesterday, the Vermont Legislature warmly received a non-nuclear energy salesperson and allowed her to continue her traditional tactic of emotionally telling negative stories about the competition. I know, that is a purposely provocative way to describe the event, but that is certainly one way of looking at a situation where wind and solar entrepreneurs named…