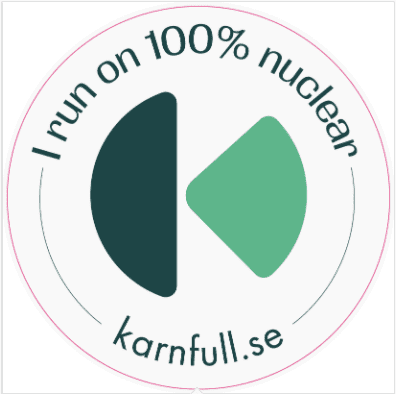 Karnfull Energi is a young company that is successfully proving that nuclear energy is more popular than politicians believe. They have created the world’s first 100% nuclear energy offering.

Customers have responded with their wallets, showing they are willing to pay a modest premium for higher quality electricity.

People are shopping at Karfull’s online store. Hats, tee shirts and stickers displaying the Karnfull logo and proudly proclaiming the wearer is running on 100% nuclear are showing up in some surprising places.

How is it possible to market 100% nuclear electricity?

In Sweden, Karnfull’s home market, electricity generators produce power with a certificate of origin that allows marketers to identify the sources of the power they sell to customers.

This is a well established system for wind and solar energy. While having a free-ranging conversation during a ski weekend, Karnfull co-founders decided that people who like nuclear energy should have the same opportunity express their preference.

Karnfull’s offering was packaged and made available for customer purchase in August 2019. It was announced with a press release on a weekend when most Swedes are on an end-of-summer holiday. It was a time when there was little news, that might have helped Karnfull gain the attention of writers and editors.

How is it going so far?

Within 24 hours, they had reached the sales goal they set for their first month in operation.

Karnfull’s success has had a major impact on the conversation about nuclear energy in Sweden. It may have already played an important political role in moving several parties away from a previous agreement to move towards 100% renewable energy by 2045.

Karnfull’s co-founders, John Alhberg and Christian Sjölander, are long-time friends who have each had successful careers in international businesses. Between them, they are fluent in Swedish, German, French, Japanese, Italian and, as you will hear, English.

They have a fascinating tale and ambitious plans to expand their concept into additional markets.

Aside: John and Christian happily admit that the certificate of origin system is an artificial construct that does not reflect the true nature of electricity movement. But it is the tool that is available. End Aside.

I first heard John describe Karnfull on Titans of Nuclear episode 255 (March 31) and immediately began making arrangements for his appearance here. I would rank this as one of the most fun Atomic Shows produced so far.

Please have a listen. Comments and constructive feedback are always welcome. I hope you will be pleasantly surprised by the audio quality and lack of lag on a call between Florida and Sweden.

George Stanford talks about sodium cooled fast reactors George Stanford earned his PhD in experimental nuclear physics from Yale University and then spent his professional career doing nuclear reactor safety research at the Argonne National Laboratory. One of his special interest was the sodium cooled fast reactor program. He worked on the Experimental Breeder Reactor…

I hope some of you missed us last week. If not, we must be doing something that needs improvement. Just in case you noticed that we did not post a new show last week, we simply were not able to match up our schedules. I had a series of meetings about Adams Atomic Engines and…

On July 27, 2015, the Wall St. Journal published an article written by Rebecca Smith titled Prefab Nuclear Plants Prove Just as Expensive. That piece has been widely shared and discussed on social media with more than 2700 shares on Facebook and more than 150 shares on Twitter as counted from the original article. I…

There are 34 nuclear reactors located in areas affected by Hurricane Sandy. Of those, 7 were shutdown for planned maintenance. Three units tripped due to disturbances on the grid or issues with one of their redundant cooling systems. The other 24 remained operational and supplied as much power as the grid could accept. On Sunday,…

Inspired by Steve Aplin’s excellent post titled Nuclear exceptionalism: why is a nuclear fatality more noteworthy than a non-nuclear one? show # 165 focuses on the reasons why nuclear exceptionalism exists. We also talk about ways to change the tone of the discussion and actions that are already being done. Guests on this episode of…