Until very recently, the understanding held by most people associated with nuclear energy has been that nuclear energy plants must be very large to achieve the “economy of scale”. Yesterday a group of several hundred ANS meeting attendees heard from representatives from the USA, Jordan, Mexico, Japan, and Russia that there are customers who are interested in using nuclear energy to meet needs in places where large power reactors simply will not fit. (A scheduled speaker from Argentina did not arrive to speak due to a travel delay.) The title of the session was ANS President’s Special Session: Global Opportunities for Right-Sized Reactors.

As Tom Sanders, the current president of the American Nuclear Society (ANS), said during his special session introduction, building nuclear energy production units that match customer needs is a topic that is “near and dear to my heart”. Like Tom, I started my career in nuclear energy as an trainee on nuclear reactors that produced less than 1/20th as much power at full load as a “typical” 1000 MWe central station nuclear power plants. Those “little” reactors, however, were well suited for what many might consider to be a pretty big task – they provided all the power needed to propel a decent sized ship displacing 9,000 tons of sea water plus all of the power needed to provide atmosphere control, produce fresh water, and supply lighting, cooking and computing power for 150 people.

Outside of the Navy, there are thousands of ships plying the oceans with power plants that are roughly the same size as the one where I – and tens of thousands of other American sailors and officers – cut my atomic teeth. In total, those ocean going commercial ships consume about 6% of the world’s annual oil output. They also produce a substantially larger portion of the world’s sulfur dioxide and particle emissions since they generally burn a grade of oil that would be illegal in most land-based power plant.

Aside: There is a myth that needs to be dispelled – there is no need to use expensive, highly enriched uranium to build a reactor that can fit on board a ship. The NS Savannah, the only nuclear powered commercial ship that the US ever built, had a reactor that worked fine with just 5% enriched fuel. The necessary technology was known and well developed by the late 1950s. End Aside.

However, yesterday’s special session was not about ocean shipping companies’s propulsion power needs; it was about the ways that nuclear energy facilities that are far smaller than 1000 MWe could supply customers on land who are currently prevented from having a nuclear option. If you take propelling the ship out of the equation, a reactor with the same power output as the ones that I learned to operate could provide a small town of perhaps 20,000 average Americans – or several small towns of 20,000 average Chinese people with all of the power they need for a decent lifestyle. Based on common agreement and definition, the category of small or medium sized reactors includes any power plant that provides less than about 300 MW of electrical power – that is enough power to supply the power needs of a city that is the home of several hundred thousand people in a developed country.

During his introduction, Tom Sanders made an important statement:

The idea is catching on. In fact, we have support in the Congress now, support in the administration, and support within the White House. And that’s great. I view these as an opportunity to revitalize US industry and our first speaker is going to talk about industry revitalization. 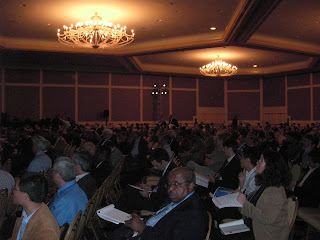 That first speaker was Mary Saunders, the Acting Assistant Secretary of Commerce for Manufacturing and Services at the US Department of Commerce. Her portfolio includes activities designed to ensure that US companies have the opportunity to compete as suppliers in the global market for goods and services. Her organization has a growing program aimed at encouraging the development and expansion of production capabilities for small and medium sized reactors – SMRs for short. She gave a number of specifics about what the Department of Commerce is doing to help US companies to obtain access to what she called “a rapidly growing international market.” It was an encouraging talk, especially considering the fact that many people who lean to the right within the political spectrum make the assumption that the current Administration is not sufficiently supportive of nuclear energy.

There is a growing sense in Washington that nuclear energy is a place where people with diverse opinions can meet – it provides reliable, affordable, abundant energy, large employment opportunities, emission free power, and power that is not solely dependent on fuel sources with an unequal geographic distribution. Within that list of attributes are traits that meet the political objectives of conservatives, liberals and libertarians – with the possible exception of expanding market opportunities for coal, oil and gas producers.

After Ms. Saunders spoke, the rest of the panel provided short talks that identified their country’s reasons for interest in SMRs. Most people in the audience should not have been surprised to find that Jordan, a country with about 5 million people, a total grid capacity of about 2500 MWe, a mostly desert country with some access to salt water, and a nearly complete dependence on imported fossil fuels would be interested in small and medium sized nuclear energy facilities as part of its announced goal to become an energy producer and to create a more sustainable water supply.

Aside: Here is another myth to be busted – nuclear plants do not have to be major potable water consumers. Though nuclear heated power plants often use water for cooling (like any other thermal power plant), they also can be arranged to use the waste heat to turn salty water into potable water useful for drinking, irrigation, and other human needs. They can also use low cost, off peak electricity to power pumps in reverse osmosis plants to produce vast quantities of affordable water. Islands or desert areas with access to salty, high mineral content water have a real, demonstrated need that can be met with nuclear energy. End Aside.

What may have been more surprising to attendees was that Japan, a densely populated and developed nation with a large power grid, also has a strong interest in right sized reactors. So does Russia, whose representative – Dr. Evgeny Velikov – proposed a joint venture with the US, and recommended a system where the energy customers could purchase just the energy services from SMR suppliers without having to make the full investment in fuel cycle facilities. The floating nuclear power plants that Russia has begun constructing are ideally suited for applications where the power plant gets moved to the place where the power is needed and then gets returned to the origin when the fuel has all been consumed. Dr. Velikov pointed to the Russian experience of decommissioning more than 100 nuclear subma
rines as evidence that this kind of system has already been well demonstrated.

Once the panel was finished, there was a few minutes left over for questions and answers. The first questioner made what I considered to be a huge leap of interpretation and asked about the policies that might be needed to enable unmanned reactors. As a former operator and maintainer of small reactors, I wanted to answer the question by pointing out that there is a rather large continuous number line between zero (unmanned) and the several hundred people required to operate and maintain a typical central station nuclear plant.

In my case, I led an engineering department with about 30 nuclear trained people. That small group was fully capable of independently operating and maintaining a modest sized reactor around the clock for months at a time. Like any large reactor facility, we were supplemented with specialists for certain kinds of maintenance or repairs. A facility that provides enough of a valuable commodity like electricity to supply tens of thousands of customers should be able to afford a few dozen operators, maintainers and security personnel for safe and secure 24×7 operation.

As people who know me might guess, I also asked a question. I directed my question to Ms. Saunders from the US Department of Commerce. Here is the exchange:

Adams: One of the obstacles to small and medium reactors here in the United States is the Nuclear Regulatory Commission licensing fee structure, which assumes that a reactor is 1000 MW or greater, because the annual fee is about $4 million. The Nuclear Regulatory Commission obviously cannot really change that rule. Are you involved in the potential for taking a new look at that licensing fee structure so that American manufacturers can build for America as well as export? I would imagine that nobody is going to buy reactors that we won’t buy ourselves.

Saunders: That’s a very good point. We haven’t addressed that issue. It’s certainly something that we can address at the interagency working group. One thing that Manufacturing and Services is responsible for is both domestic competitiveness as well as export competitiveness so any domestic regulatory barriers or issues that affect domestic deployment as export issues we can certainly take that up. It has not been a focus of the interagency discussions to date. It has been largely about selling nuclear reactors overseas, but it is certainly something that we can take up. I do know that at the IAEA meeting Commissioner Jaczko said and once again here, that they would facilitate the design review and quality of such reactors, even those that were not currently in the queue for domestic deployment so that is a positive development. I will certainly take this fee issue back and discuss it.

Following the session, a long time reader named Steve found me and introduced himself. (That is a side benefit of asking questions at a large session like this one – people find out that you are in the room and figure out how to find you.) It is always good to meet people who have enjoyed reading the material I share with you here – face to face interaction is at least as much fun as participating in the comment thread on a blog. He asked me if I was feeling just a little bit of justification for my long time efforts to promote the idea of SMRs. I told him that it did feel good, but that there are plenty of people who have recognized the logic of the idea for a long time. It was just nice to see such a large crowd of people.

The feeling of making progress did not last too long. In the men’s room immediately after the session, I overheard a guy saying talking about the high unit cost of smaller reactors and how big reactors were big for good economic reasons. I guess we still have a ways to go to prove that economy of scale in nuclear energy does not necessarily mean big units – it can mean a large number of identical smaller units produced in a series fashion. That idea has been proven in many other industries; now it is nuclear energy’s turn to show that we “get” mass production principles.