Over the past few days I have been engaged in some very interesting email correspondence with a number of talented, aggressive, inquisitive people who are excited about various ways to use fission based technologies as contributing ways to solve a number of pressing economic, energy and ecological challenges. As a sometimes participant and sometimes observer to the inside world of bureaucratic decision making, I thought it might be worthwhile to offer a few thoughts about technical and intellectual competition.

One thing that should be clear to all participants in the nuclear research community is that there are an almost infinite number of ways to combine various core materials, coolants, and secondary heat engines to produce useful power out of heavy metal fission. Each combination can offer characteristics that might better suit particular applications or optimize one specific measure of system effectiveness. For example, gas cooled reactors offer the highest temperature capability; liquid metal cooled reactors offer the potential for high power density cores, heavy water reactors offer fuel material flexibility, light water reactors are tried and true and use a material that is in great abundance on the earth. None of the choices is good or bad, they are simply different and need far more space than a blog post to describe all of the advantages and disadvantages of the various approaches.

For some observers, the spectrum of reactor power system choices is simply confusing; they want the decision to be simple and straightforward. Some even advocate that there should be an uber committee of experts that gets together to evaluate all choices and is empowered to select “the best one” that will be the single design for all to follow. In fact, several such committee selection processes have already been attempted. Many people both in and out of the nuclear industry have pointed to the successful light water reactor employment in France that is based on about three evolutionary step improvements on the same basic design to state that standardization on a single design is THE way to go.

I see it differently. For me, the amazing array of choices simply reinforces my belief that fission is the new fire. Like fire, it is quite simple to understand the basic process, but it can take a lifetime of study and specialization to become really good at employing either fission or fire in specific power generating applications. In the combustion world, it is fairly common for a researcher to specialize in something like diesel engines or gasoline engines or natural gas fired gas turbines or flexible fuel boilers for steam plants. Some design little gasoline engines for applications like snow or leaf blowers, others engineer 70 MWe behemoth diesels for ship propulsion or 500 MWe turbines for supercritical steam plants. Most combustion specialists have favorite technologies about which they have extremely deep knowledge.

Because of all of the various markets available for combustion based products, there is a healthy competition that keeps people driving for improvements to their own designs and not a terrible amount of time spent sniping to point out the limitations of the other power sources. (There is, of course, a certain amount of “going negative” about a competitor, but that is the case in any sales situation.) 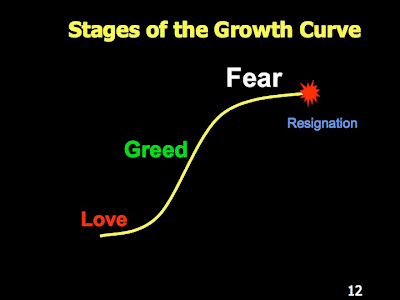 Compared to combustion, fission is a much newer science and engineering discipline with far more avenues open to exploration and new ideas. Combustion has been around for thousands of years and most of the improvements remaining are going to be marginal; humans are pretty close to the top asymptote of technological development for burning stuff. In contrast, fission in general is closer to the lower flat portion of the typical ‘S’ curve of development. In certain forms, however, it is in the steep increase of application that makes markets happen and money to flow. As the below graphic from a fairly typical ‘S’ curve presentation shows, there is a rather negative behavioral trait associated with that section of the curve – when there is money at stake, discussion about the characteristics of various technologies can become heated arguments that can confuse and even turn off potential customers.

So far, fission has achieved a stunted growth pattern, with lots of early developments, a focus on one particular technology and then little future progress. A confluence of market and political situations forced most practitioners into believing that there was a single market – large power plants – and a limited number of decision makers – mostly government or utility company bureaucrats – who could make all the necessary choices about what characteristics were important. Fortunately, this time around there are a few people coming into the business from a more expansive point of view. 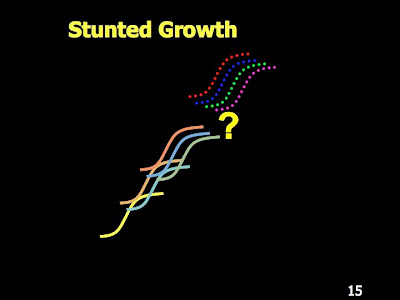 The newcomers understand the basic process of producing heat with fission and recognize that the market for heat that can be used in a variety of useful ways is incredibly large. There is a much wider potential customer base, for example, for $30 million dollar, hot tub sized Hyperion Power Modules than there is for 1100-1700MWe central station light water reactors. The monetary value of the later market may be much larger, but the number of potential customers for the former is many orders of magnitude greater. Neither Hyperion nor NuScale appear to be too worried about convincing the Department of Energy to support their research and development; both seem to have determined that they know enough to build a business on their existing technical base. I am sure that both companies see ways to improve on their designs, and I expect that if they achieve market success they will be rolling a portion of their profits into incremental improvements.

Unfortunately, there is still a sizable contingent in the fission world that believes that the only path to success is to build the next large thing – some kind of improved central station power plant that can answer all of the criticism that has stunted the growth of the current generation. They are going around the country working to convince various influencers that they have the magic bullet that will make fission respectable again. Because of the tremendous sums of money involved, they are swinging for the fences, even though they need several runs and there are several innings left to play. (Aside: Sorry for the baseball reference that might confuse people. I am a fan of the National League style of play where scrappy, speedy base stealing, bunting and bloop singles to manufacture runs is the more accepted strategy than the American League style of heavy hitters.)

Light water reactor advocates point to their proven success, IFR advocates point to the story of their interrupted development during the Clinton Administration and describe what could have been, and LFTR
advocates are working hard to make the case that they have been a neglected stepchild for too long. Complex arguments are getting summarized by dismissive comments like “not invented here” to explain the reluctance of specialists who have a deep understanding to change technical direction. Those who think it is easy to accept a new technology do not fully understand that the process would involve new learning and a huge cost to replace existing capital investments in both equipment and in the brains of all of the people who already understand their role in the existing way of doing business.

Enough rambling. Fission is an exciting field with many paths for development. There are advantages and disadvantages to all of potential paths and lots of room for improvement with opportunities for really interesting discoveries. My fervent hope is that fission advocates can all recognize that they are not just in competition amongst each other for a very limited pot of government research money, but in competition with the rest of the energy industry for enormous markets with plenty of available cash for productive systems. There is a real need and opportunity for people who are more deployment focused to reach into the laboratories and spare bedroom offices to find ideas that are good enough for now and that can earn enough income to support further developments.

Go forth and create, but please stop trying to elevate your favorite atomic technology by describing the challenges your fission rivals face as unmountable obstacles, especially if you are simply repeating something that you have heard or read without having a detailed understanding. In many cases, there are people who recognize the challenges and have solid plans for either overcoming or avoiding them. Believe it or not, there are often valid commercial reasons for not fully explaining the details of a product design too early in the development process.