The attorneys general of Vermont, New York and Connecticut are once again trying to use “the waste issue” to establish control over the longevity of nuclear energy facilities. Those lawyers hate the idea that large scale, reliable, emission free energy production plants can continue to operate for decades without having to bribe state governments for continuing permission.

The governments are also trying to force the federal government to take near term action on an issue that does not need any near term solution. They are trying to use the courts to force action and expenditures when procrastination is a perfectly safe and cost effective way to respond. Used nuclear fuel is well behaved; it will meekly accept confinement in simple containers and stay there until it is purposely moved.

However, people who are opposed to the continued use of nuclear energy insist that we just do not know for sure what will happen in the next few decades or centuries. They rightly point out that the companies that operate the plants today MIGHT not be around in a couple of hundred years. Apparently that uncertainty is supposed to make us very worried. (I have no idea how I am going to pay for a meal 20 years from now, but I never worry much about it.)

Roger Witherspoon, a journalist who is no friend to nuclear energy, wrote about the recent decision by three states to sue the federal government on “the waste issue.” You can find Roger’s take on the issue at Suit challenges new nuclear plant waste storage rights. Here is the comment I added to that article. 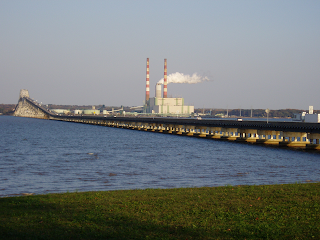 Coal Plant on Potomac River at US 301

As Roger Witherspoon points out, it is possible to raise a lot of uncertainty flags when you project out for decades or hundreds of years. We really do not know EXACTLY what will happen or who will pay if there is some kind of issue with used nuclear fuel that the NRC scientists and engineers did not predict.In contrast, we KNOW how long it takes before the deadly waste products from hydrocarbon combustion are uncontrollably released into the environment. Fossil waste dumping occurs almost instantaneously because the mass and volume of the material in question is WAY too large to store – no matter how hard you try.

Yes, after operating nuclear energy plants in the US since 1957, we have accumulated about 50-60,000 tons of used fuel material. That material is carefully inventoried, monitored and stored in either pools or casks. The plant operators can account for almost every single gram produced. There are 806 billion kilowatt hours produced every year in nuclear plants in the US.

In contrast, a single large coal plant will be required to dump about 45,000 tons of waste material DIRECTLY into our shared atmosphere EVERY single DAY that it operates. It will also dump about 1,000 tons of a toxic mix of ash and ‘stuff’ into a slurry pond and ash pile. Those storage locations are neither monitored nor even sealed from the environment and are often found to be leaking into nearby bodies of water. Sometimes the retaining dams fail with significant and well publicized consequences. A large coal plant might produce 8 billion kilowatt hours per year, so you can easily see the difference in the tons of toxic waste per kilowatt hour between coal and nuclear.

About 50% of the power in the US comes from burning coal, 20% from burning explosive natural gas, and 20% from fissioning uranium. Most of the rest comes from large hydro electric dams. Do not be fooled, the alternative to nuclear is not weather dependent and fundamentally unreliable wind and solar; it is something with its own waste products that are often far more predictably and immediately released into the environment.