Despite the currently abysmal state of the market, Virginia Uranium Inc. (VUI), owner of the 119-million pound deposit at Coles Hill, continues legal efforts to overturn the ostensibly temporary moratorium on uranium mining in the Commonwealth of Virginia.

The most recent step in the process for overturning the moratorium, first established in 1982 pending the creation of a regulatory regime, was a pre-trial hearing during the first week of October on a lawsuit in which VUI is charging that the rule violates the state’s constitution.

Specically, VUI’s legal team argued that the prohibition on extracting uranium amounts to a regulatory taking of private property without proper compensation.

But state Assistant Attorney General Duncan Pitchford asserted that eminent domain is allowed when needed to protect the public’s health and safety and that Virginia lawmakers ful lled their responsibilities by imposing the ban.

VUI asked Judge Chadwick Dotson to require that the government clarify its assertion that the legislature has determined that moratorium is needed to protect public health.

It’s worth noting that the legislature’s only recent action regarding the moratorium was to fail to vote on a bill that would have lifted it. The measure was proposed and actively discussed in a variety of public forums, but the bills were never brought to the floor.

After his 2013 election, Gov. Terry McAuliffe (D) vowed to veto any legislation that lifted the ban. His four-year term ends in January 2018, just 15 months from now.

According to John Ohlendorf, one of the attorneys on the VUI team, VUI would like Judge Dotson to force the government to be specific about the supposed health risks associated with uranium processing and tails storage.

Ohlendorf agreed that an argument can be made that the Atomic Energy Act preempts state responsibility in judging whether those portions of uranium mining activity are being done safely.

VUI attorneys may have a point. Via a 2012 ballot initiative, 75% of Virginia voters approved a constitutional amendment that tightly limits the criteria by which governments can exercise their eminent domain.

The amendment also made it more clear that government restrictions that limit full property value qualify as takings that deserve compensation.

Ohlendorf told me that the Attorney General’s office apparently believes it preserved the status quo, a position that could be bolstered by the lack of related case law or precedent as the amendment is only four years old.

He and other members of the plaintiff team are looking forward to the opportunity to help the state better understand what the voters wanted when they passed the initiative on eminent domain.

The new statute allows its exercise only “where the property taken or damaged is for public use and, except for utilities or the elimination of a public nuisance, not where the primary use is for private gain, private benefit, private enterprise, increasing jobs, increasing tax revenue, or economic development; (ii) to define what is included in just compensation for such taking or damaging of property; and (iii) to prohibit the taking or damaging of more private property than is necessary for the public use.”

Meanwhile, two challengers vying to represent the fifth district in the Virginia House of Delegates believe that uranium mining remains a issue for which continued support of the ban equals more votes.

Her campaign staff said the support is a result of two $1,000 contributions, one in 2011 and one in 2012, made by VUI while Garrett occupied a seat in the commonwealth’s senate.

Garrett’s campaign issued a strong denial, saying he never voted to lift the uranium mining ban. According to communications director Andrew Griffin, HB179 said nothing about removing the moratorium.

Bearing Drift, a conservative Virginia blog, noted and condemned Garrett’s decision to claim he opposes uranium mining. According to Shaun Kenny, the author of the piece, uranium “rocks.”

An editorial in the Richmond Times-Dispatch noted that a press release from Gov. McAuliffe took credit for a recent $300,000 sale by Ceramic Technology. That 32 year-old company sells ceramic coated fabrications initially developed for the coal mining industry.

The editor criticized the governor for claiming that Ceramic Technology’s sale was a direct result of the company’s participation in the Go Global with Coal & Energy Technology (GGCET) program. GGCET supported a sales trip to Canada, providing an opportunity for Ceramic Technology to pitch its valuable products to the gold and uranium mining industry.

Developing that deposit will require millions of dollars in equipment that could be supplied by Virginia’s experienced mining industry. Digging rocks out of the ground is a Virginia core competency.

As Ohlendorf said, uranium has been patiently waiting in the ground at Coles Hill for a long time. Until it has been mined, there will be continuing efforts to unlock its value.

Note: A version of the above was first published by Fuel Cycle Week. It is reposted here with permission.

Virginia may be the only state in the U.S. with a law creating a public-private partnership structure whose mission is to strengthen and promote its nuclear energy and technology industries.

The authorizing legislation passed with little opposition in early 2013, and the VNECA hosted the first of a series of meetings that October.

On December 10, 2015, the consortium’s executive director Marshall Cohen spoke at the annual joint meeting of the Virginia chapters of the American Nuclear Society and the American Society of Mechanical Engineers.

Cohen walked the crowd of 70 interested professionals through VNEC’s history, described its current activities, talked about near term priorities and solicited the involvement of everyone with a vested interest in seeing the organization make progress in achieving its mission.

That mission is to sustain and enhance the Commonwealth of Virginia as a national and global leader in nuclear energy and serving as an interdisciplinary business development, research, training, and information resource on nuclear energy issues.

I attended the meeting and listened carefully to the presentation.

During his talk Cohen spoke to the importance of the Ex-Im Bank reauthorization and VNEC’s active role as one of many supporters of the effort. That involvement was successful and provided VNEC an opportunity to build its brand and prove its worth to members and potential members.

It also enabled the organization to begin building a national network and organizational identity. The VNEC executive described an effort in cooperation with NEI that will result in a conference in the first quarter of 2016 for interested individuals and organizations to discuss nuclear technology issues in Virginia. The event is being treated as a prototype for similar events around the country.

He then recounted a conversation with Gov. Terry McAuliffe (D) that some of my fellow Virginians (and Americans) might find a little incredible.

Cohen: I was with the governor on Monday morning [Dec 7] at a conference. He says, “Oh yeah, nuclear in Virginia. That’s critical. That’s important. I love nuclear. I wish we had 100% nuclear. What can I do to help?” It’s the governor. He’s ebullient. But you know what, he will help.

When Cohen finished talking and solicited questions, my hand shot up. Here is a transcript of the resulting conversation.

Adams: One of the things that I’ve worked on over the last cou- ple of years is helping people understand that mining uranium is a useful and vital part of our industry and that people who try to make it out as a health issue are harming the prospects for the rest of us.

You talk about a nuclear cluster in Virginia. We have at least 119 million pounds of uranium on private property with good roads and good infrastructure. Is the Virginia Nuclear Energy Consortium going to work on that issue and help the Coles access their private property?

Cohen: It is not an issue that’s come to us. I would be more than happy to take the issue to the board. Somehow just make a request or give me some background information and we can cer- tainly have a board discussion. I follow the policies that they want to set. I try to help guide them so that they can see what’s going on so they are aware of things.

But I did a lot of work in New Mexico on uranium enrichment and am aware of the mine history and legacy and all of the issues that come at us even though we weren’t involved in that.

Adams: And it’s very important for us as communicators to help people understand that history is not what we’re doing today. We don’t do mining the same way they were doing it in New Mexico in the 1950s. It’s a completely different animal.

Cohen: But we have to be cognizant of experiences. You know there are no boundaries on those things, even more so now with the Internet. So we need to be prepared. Well educated, well in- formed and prepared if we’re going to move forward.

If this was not a nuclear thing, it would seem very strange indeed to realize that a state whose government has created a structure like VNECA and VNEC also has rejected efforts to overturn a three decade old “temporary” moratorium on uranium mining.

Since we’re talking about nuclear, no one should be at all surprised.

Note: A slightly different version of the above first appeared in the Nuclear Buzz column of the December 17, 2015 edition of Fuel Cycle Week. This version includes an expanded description of the VNECA membership and a correction of a typo in the list of corporations from “Hitachi” to “GE-Hitachi.” It is reprinted here with permission. 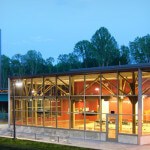