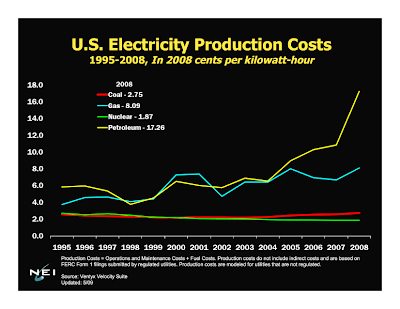 One thing that continues to befuddle me is the consistently repeated myth that nuclear energy is expensive energy. I want you to take a hard look at the above graph. It is a slightly modified version of the original which can be found buried several layers down at the NEI web site under the heading of Resources and Stats. The major change that I made was to alter the background to make the lines show up a little better on the web.

As you can see, the spread between nuclear energy production costs and coal energy production costs is getting wider with each passing year. As of the end of 2008, the difference between “cheap” coal and “expensive” nuclear was more than 30% with nuclear in the lead. If you cannot read the graph clearly inside the blog post, just click on it to bring up a larger version.

Makes one wonder a bit, doesn’t it?

PS – Sorry for my lack of a July 4th post. I was kind of laid up and not able to focus clearly.

I mentioned a few days ago that I was going to be attending the ANS Student Conference at Texas A and M. I promised myself that I would try to produce some on the site blogs, but it is always difficult to find the time to produce a good entry during a conference. There are…

On April 8, 2006 the TimesOnline published a short, thought provoking article titled World ‘cannot meet oil demand’, written by Carl Mortished. The article focuses on information provided by Christophe de Margerie, head of exploration for Total. According to M de Margerie, the important fact that is missing when commentators and others talk about energy…

The Conservative Voice has posted an article by James Finch of TradeTech titled Is $50/Pound Uranium Sustainable? dated 7 September 2006. If you are interested in the factors that influence uranium prices and the profitability of the uranium mining industry, I highly recommend that you read the article, perhaps a couple of times. According to…

According to an opinion piece titled The debate on Irish nuclear power should be fuelled by pragmatism the recent decision by the UK to include nuclear power in its future energy plans is causing an increased level of discussion about a domestic use of atomic power within Ireland. Another useful source about the discussion can…

Luke Weston at Physical Insights has produced a valuable and detailed post about the Australian coal industry’s research and marketing efforts in the field of carbon capture and sequestration. Go read it – perhaps twice – before getting excited about the prospects for “clean coal”.

After the Chernobyl accident, Italy passed a referendum to halt new nuclear power plant construction and to shut down their existing plants. As a result of that decision and the fact that Italy has little coal, it now generates 75% of its internally generated electricity from oil or natural gas. This dependence has given Italy…