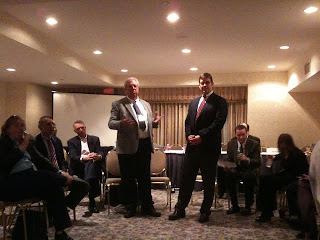 Like many people who blog, I use it as a tool to communicate with people who share a common interest, but not a common location. Sometimes, however, there are wonderful opportunities to actually meet people in person with whom you have shared thoughts and ideas for several years. I had just such an opportunity last night – in fact, in a “cup overflowing” kind of way, I had two such opportunities.

The first event was a gathering of nuclear bloggers, micro-bloggers, podcasters, and even a few lurkers who read a lot of what the rest of us continue to produce. Dan Yurman of Idaho Samizdat (BTW, Dan, will you be changing the name of your blog when you make that move?) was the primary spark with the idea, but Jarret Adams of Areva Blog, David Bradish of NEI Nuclear Notes, and John Wheeler of This Week In Nuclear jumped in and worked together to make it all happen. (I am sure that there were others who made sure that the food showed up on time, that the room was arranged, and that the posters were prominently displayed. I apologize if I have forgotten to provide credit where it is due, but that is why I have comments enabled here.)

A good time was had by all, the conversation was lively, and renewed sense of fellowship was reinforced. We have a strong foundation of knowledge that we are learning to share with others in a way that makes our technology more accessible and understandable. The more that people understand why we are excited to be nukes, the more that people will be willing to allow us to do our important work of producing vast quantities of clean, reliable, affordable, energy. They might even get to the point where I am – they will be demanding an atomic energy plant in their own backyard. 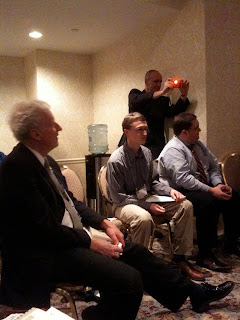 I was enjoying myself immensely at the blogger get together, but I excused myself after about an hour because I had also signed up to attend a reception for Women in Nuclear (WIN). Despite the name, the organization does accept members of both genders; I joined up a few months ago. One of the the things that is really encouraging about the second Atomic Age is that it may very well be led by some of the women who have recognized a profession that builds on both interest in math and science and caring about one’s effect on the world. I think that the “safety culture” that the nuclear industry encourages – actually demands – is something that is quite comfortable for women. Of course, like most men, I am kind of ignorant about what really motivates and inspires women, but as the father of two adult daughters who have already achieved significant successes, I have at least an inkling of understanding.

The WIN gathering was in the upper level of a local sushi restaurant. The food was far better than what we had at the blogger gathering (sorry, I hope that does not offend the sponsor there) and the company was just as lively. I made some good contacts that might enable some future articles or Atomic Show podcasts. I also got the sense of excitement and positive vibes that make me believe that the Nuclear Renaissance is real. I heard about several recent career moves, some job openings, and some future developments that make me glad to be planning to join the industry for real during my second (or is it third) act.

Finally, on my way back through the hotel lobby to my car, I ran into an friend that I have known for years – ever since she invited me to speak to a group of nuclear engineering students at Penn State in the mid 1990s. Madeline told me to check out the recent press release from her organization that detailed the successful results from advanced gas reactor fuel testing. The test demonstrated that TRISO coated fuel particles manufactured by B&W have been able to achieve an average burn up of 16% of the initial heavy metal loading with a peak of 19%. There were NO fuel particle failures. As Madeline told me, there were some critical observers that asked if the fission product monitors were actually functional since they showed such low numbers – of course, they had been rigorously tested repeatedly during the entire three year program.

There is no doubt – the nuclear technology field is here to stay. There is little doubt that the field is going to be making major contributions to the world’s prosperity during the upcoming decades. I am just glad to be young enough to be able to participate and help many fine, intelligent and interesting people turn solid design work into real machinery that produces useful power to save the world.