One of the members of SARI (Scientists for Accurate Radiation Information) shared a disturbing story with a happy ending. I obtained his permission to share the story more widely in hopes that others will benefit. The happy ending was a result of caregivers who listened and responded properly when provided with accurate information that conflicted with conventionally accepted misinformation.

Note: The below was edited lightly to provide more paragraph breaks and to anonymize the name of the medical establishments involved.

I want to tell you about my past 24 hours. Our 12-year old son stayed home from school with an upset stomach. It got progressively worse throughout the day yesterday, so we went to see his pediatrician. The pain was localized to his right side and he had other symptoms which concerned her, so she sent him and my wife to a children’s hospital – which is one of the best hospitals of its kind in the country – for an ultrasound.

A second pediatrician examined him and advised my wife that he had signs consistent with appendicitis. This is where it got interesting. She advised that we get an ultrasound rather than an abdominal CT, even though a CT provides a more consistently reliable diagnosis. She said that if the ultrasound was inconclusive, they would proceed to a CT.

At this point, my wife called me. I asked what the pediatrician’s reason was for not proceeding directly to a CT, and she told my wife that CT involves radiation exposure equivalent to 1000 X-ray exams and there are studies that show that this increases cancer risk in children. She also said this was close to the male gonads, and she was worried about reproductive effects.

Coincidentally, on the same day my son went to the hospital I submitted a revised draft manuscript to the journal Dose Response concluding that risks from diagnostic imaging are still “too low to be detectable or are nonexistent” contrary to hysterical claims otherwise.

I made it very clear that they were to proceed with the CT and not waste time on the ultrasound. I told her that a cup of water contains probably a thousand raindrops, but that doesn’t make it a drowning hazard – and by the same token, a CT scan is not dangerous just because it gives a higher dose than other imaging modalities. To her credit, the pediatrician relented quickly. The CT showed an inflamed appendix, and my son had an immediate appendectomy. He is doing well, and the staff said the surgery involved only minimal risks because we caught the appendicitis so early. I note that this was because of the CT exam.

Let me pause here to say that my son received excellent medical care. The pediatrician wanted to give the best and most appropriate medical care to my son. She is not the enemy. However, she admitted that she has no particular expertise in radiation effects.

That’s what makes articles like this one so dangerous: http://www.nytimes.com/2014/01/31/opinion/we-are-giving-ourselves-cancer.html?_r=0 .

It leads well-intentioned healthcare providers to give detrimental advice to their patients, and it leads parents to make decisions which are not in the interests of their children. Before yesterday, I knew in the abstract sense that this was happening, but it just got very real for me.

Dr. Ulsh’s personal experience initiated a lively discussion among SARI members. In the near future, I hope to publish some of the best responses here, but I need to obtain some specific permissions first.

One thing that I learned from the discussion was that the pediatrician’s initial response was probably influenced by the medical profession’s reliance on a textbook titled Radiobilogy for the Radiologist. The book is often the source for creating medical board questions and answers, so its prescriptions play an important role in the medical field.

I won’t pretend to have read the book. Many of the people in SARI have read it and have been tested on its contents as part of their certification process. I did some searching for other work by the same author (Eric J. Hall) and found a 1991 paper titled “The Molecular Biology of Radiation Carcinogenesis” by Hall, Eric J. and Freyer, Greg A. SARI members have confirmed that this paragraph illustrates the basic model underlying his prescriptions.

“As our level of sophistication has progressed from the whole organism to the tissue, to the cell, to the chromosome, and to the gene, we have arrived at the basic building block of biological material, the arrangement and sequence of nucleic acids in DNA. The diverse biological effects of ionizing radiations can all ultimately be understood and interpreted in terms of changes and or disruptions in these base sequences.”

That statement indicates that Hall’s work overlooks the evolutionary response mechanisms that protect complex, multicellular organisms. Hall’s described process of increasing “sophistication” in molecular biology ignores defense systems that have been uncovered by research on cells, tissues, and animals as described by works like Feinendegen’s chapter on Hormesis in Medical Radiology: Radiation Oncology.

The idea that one can determine the biological effects of any external influence on complex, evolved creatures by finding out what happens on a molecular level strikes me as equivalent to deciding that a single minded focus on transistor responses to electrical signals will provide an understanding of the functioning of a modern computer.

It seems blindingly obvious that a system level understanding must be combined with molecular level sensing in order to predict overall effects.

PS: Of course, I might be a little biased in my view of the importance of system level analysis and understanding – my highest academic degree is an MS in Systems Technology.

Misinformation about radiation health effects does not just affect the nuclear industry and dramatically increase the costs associated with all nuclear energy technologies. It is also having a deleterious effect on the beneficial use of radiation and radioactive materials in medical diagnosis and treatment.

Throughout their training programs, medical doctors have been taught to do everything they can to minimize radiation exposure. This message has become so intense in recent decades that many medical professionals shy away from ordering tests that would help them do their jobs better and provide better patient outcomes.

Recently, I was privy to an email conversation between several people who are working hard to spread more accurate information about radiation health effects to busy medical doctors. I have obtained permission from the participants in that private conversation to share some of it with you in hopes of continuing the mission of helping more people understand the balance between benefits and risks of using radiation and radioactive materials.

The conversation started on June 6, when Dr. Jerry Cuttler shared the following story.

At 7 am this morning, I gave a Round to a group of ten very busy surgeons who order up many CT scans. They appreciated my presentation very much — a big surprise for them because they are constantly being hounded to minimize radiation-induced cancer risks, especially to young patients.

I brought copies of four articles, including the SARI Open Letter on LD TBI treatment.

They were very interested in Dr. Sakamoto’s data that showed peak immune system stimulation at 150 mGy (15 rad) and the LD HBI protocol of repeated stimulatory doses of 150 mGy, twice a week for 5 weeks. I carefully explained the important difference between an acute dose and a continuous dose-rate.

They believed that each CT (acute) exposure adds to cancer risk. I explained that the patient recovers from each CT exposure, due to the action of the very powerful adaptive protection systems.

The physicians were not aware of the enormous rate of DNA damage, due to the endogenous processes, and the restorative functions of the protection systems.

Good job. I did something similar with some available radiation brochures in the mid-1980s. I gave them to interested doctors and dentists, and answered their questions. I was working for a nuke plant, and hormesis was a verboten topic, back then. Regardless, even the old-school relative-risk angle was very helpful to the medical and dental professionals. I’m sure you found the experience rewarding.

Hargraves has been a guest author here at Atomic Insights. is the author of a useful pamphlet and presentation titled Radiation, The Facts.

Could you share that presentation with this group? Could it be made simple enough and self-explanatory enough that we could make similar presentations at local hospitals. I know doctors at the Dartmouth Hitchcock Clinic, and I’ve had the radiation safety officer talk to my class, so I might be able to give a presentation if it’s short enough not to embarrass myself, and if I had some papers to distribute.

Cuttler’s response is direct and informative. His message describing the communications challenge needs to be well-understood.

I’ve given about ten presentations to medical staff, including medical physicists at the Memorial Sloan-Kettering Cancer Center in New York.

No I cannot make it simple. I’ve been studying this subject since 1995, when Dr. Myron Pollycove got me started with his centennial lecture on Roentgen’s discovery of x-rays.

The subject is complex, and the physicians ask difficult questions. If the speaker does not give rapid, authoritative answers then credibility vanishes.

Many nuclear professionals harbor the notion that irrational fears about radiation are limited to the uneducated portions of the population. They need to recognize that the effort to spread unwarranted fear, uncertainty and doubt has been intensive and widespread and includes a substantial effort within the education establishment. That means there are many very well educated people who have been taught incorrect information about radiation and the way that it affects human biology.

It is important to make the effort to get the attention and gain the trust of these well-educated people so that they listen to what will be, to them, new information that contradicts most of what they have been told in the past. This is a different kind of challenge from teaching people who have no preconceived notions and who thirst for knowledge because they recognize that they do not know much about a topic.

Hargraves responded to Cuttler’s message with a link to a recently published study that might help convince open-minded, curious medical doctors to question their previously taught knowledge and open their minds to new — to them — information. The study is titled Drosophila Melanogaster Show A Threshold Effect In Response To Radiation. It documents modern experiments conducted on the same “fruit flies” that Herman Muller used in the 1940s, but it reaches a completely different conclusion about the effects of low dose radiation than Muller did.

(Note: If the direct link to the paper leads you to the Dose-Response Journal home page, just search for “drosophila melanogaster” to get a working link to the paper. Responses vary depending on browser setup and prior use of the site.)

It might be too much to hope for, but perhaps even Dr. Helen Caldicott would take a new look at radiation health effects if she learned that Muller’s research on drosophila melanogaster had been redone using modern tools with significantly different results. After all, she has informed us all that her views on radiation were substantially influenced when she learned about Muller’s fruit fly experiments during her first year of medical school. 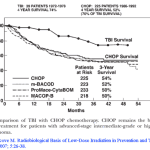 Dr. Jerry Cuttler provided a copy of an open letter signed by 23 members or affiliate members of SARI – Scientists for Accurate Radiation Information that describes important information about the use of a specific regimen of whole (or half) body low dose radiation as a treatment in the continuing battle against cancer. The organization […] 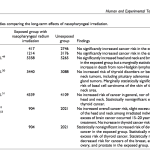