Discover Magazine recently published an article with interesting information about next generation nuclear power plants that contains all of the information that you need to know about why the US Department of Energy is one of the largest employers of scientists in the country yet rarely succeeds in its title mission of providing tools that produce useful energy.

The article starts off with a brief description of the famous four light bulbs at the National Reactor Testing Station near Arco, Idaho that represented the first production of electricity from atomic fission. The reactor used for that demonstration was the Experimental Breeder Reactor Number 1 (EBR-I). The core of that reactor was tiny – not much bigger than an NFL football. It was cooled by liquid sodium and surrounded by a blanket of material that contained uranium 238. The pressure vessel was not much taller than a human being. 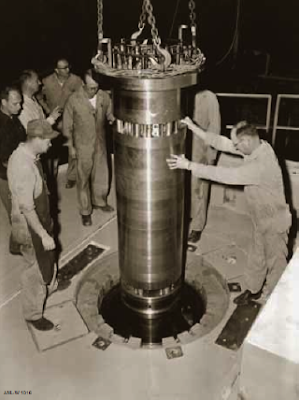 The construction project for the building that housed the experimental reactor and the associated laboratories started in 1949. Engineers and scientists from Argonne National Laboratory began installing the reactor in early 1951, started operating it in August of 1951 and began producing useful electricity on December 20, 1951. Though the famous part of that process was when the four light bulbs began glowing, the rest of the story is that the generator was large enough to supply the EBR-1 facility with all of its electrical power needs. The required experiments would produce heat as a routine product; the experiment leaders decided they should capture and use that heat to supply their own power.

At the time that the EBR-I project began, engineers and scientists had only theorized that it was possible to build a machine that could produce heat from both U-235, the readily fissioned, but rare, isotope of uranium and U-238, the uranium isotope that makes up 99.3% of natural uranium.

By 1953, the laboratories associated with EBR I had done the careful analysis of the materials produced in the reactor and determined that every time a U-235 atom fissioned, it produced one atom of Pu-239 from U-238. That meant that the reactor was producing as much fuel as it was consuming and could theoretically operate almost 100 times as long as a reactor that could only produce heat by fissioning U-235.

During the next ten years, the engineers and scientists designed and operated three improved cores, each with an improved breeding ratio. By the time they were finished with the experiments, they had proven to themselves through actual testing that it was possible to produce as many as 1.27 atoms of Pu-239 for every atom of U-235 fissioned. A suitably designed breeder could not only fuel itself, but it could produce extra plutonium to serve as the seeds for an ever growing population of atomic fission power plants. During the time that the EBR-I was operating, additional teams built dozens of other experimental plants at the NRTS, others built commercial power stations in the US and the UK, and the US Navy began building submarine and aircraft carrier reactors.

The scientific and experiential knowledge gained by operating EBR-I and performing physical experiments on the materials produced and used in the reactor contributed to an incredible foundation of knowledge about material properties. It also helped develop a large cadre of experienced technicians and operators in addition to the scientists and engineers. The little reactor was decommissioned in 1964 to make room for bigger and better experiments with the EBR-II.

During the time that the engineers and scientists were learning so much about efficiently using the available uranium resources, mining specialists had discovered that the world’s uranium supplies were far more abundant than previously understood. In fact, the resources were so immense that the market was saturated by 1962 and ore prices, which peaked in 1955, were steadily dropping. The US Atomic Energy Commission had to establish plans stretching out its offer to purchase whatever uranium could be found because it was running out of storage space.

That is one of the bugaboos about research projects – sometimes the problem you are trying to solve gets either solved or made irrelevant by others following a different path. That risk increases the more time you spend studying; part of the challenge for new technology development is that the type of problem solvers that get intrigued by research often get so wrapped up in what they are doing that they fail to see the events happening in the rest of the world. (I have been there.)

Let’s go back to that Discovery Magazine article titled New Tech Could Make Nuclear the Best Weapon Against Climate Change. It describes two conceptual projects that have been underway for at least half a dozen years already – the Very High Temperature Reactor (VHTR) and the Sodium Cooled Fast Reactor (SCFR). Neither one is expected to begin operation before 2019.

If the EBR-I team had followed similar timelines, they would have had to start working on their project before fission had been discovered in order to begin operation in 1951. The VHTR and SCFR team members are spending much of their time writing computer codes to simulate the expected behavior of the plants. The plan includes many small scale experiments with fuel and structural materials. There should be plenty of employment for scientists, especially those that enjoy writing code. I also expect that there are plenty of jobs for people who are specialists at defending research budgets in annual appropriations battles.

Neither of today’s projects will be generating their own electricity. My prediction is that by the time the experiments are completed and the code is written, the problems that the teams are trying to solve will be made irrelevant by other developments by more nimble or connected teams around the world.