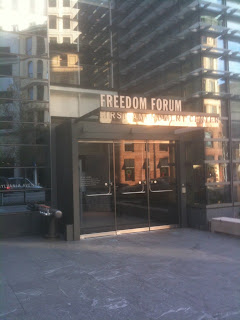 On December 7, 2010, I attended the New Millennium Nuclear Energy Summit, sponsored by Third Way and the Idaho National Laboratory. The event was held at the Freedom Forum, a part of the Newseum that is located just a few blocks from the Capitol Building in Washington, DC.

When I received the press release announcing the meeting, I responded internally in a way that might have been fairly common among other members of the DC press – “Wow, somebody is having a meeting in Washington. What news!” (Of course, you must read that reaction with the appropriate level of cynicism and realize that there are probably a few hundred press releases about meetings in Washington each week.)

The more I read about the way the meeting was organized and learned about the participant list, the more interested I became in attending the event. The conference co-chairmen were Senators Carper and Voinovich, the two senators from Idaho were there, along with several US Representatives. Dr. Steven Chu, the Secretary of Energy and Carol Browner, the director of the White House Office of Energy and Climate Change Policy had both determined that the meeting was important enough to attend, even though they could both probably justify being in warm and sunny Cancun instead of being in DC on one of the first really cold days of the year. There was also an impressive list of business and labor leaders that had agreed to participate in the discussion.

I determined that covering the Summit for Atomic Insights (and perhaps a revived Atomic Show podcast) was something that was worth the investment of my vacation time, diesel fuel for my trusty Jetta, and the four hour drive (each way) through the central Virginia countryside. (I was not so sure about the prospects of dealing with DC traffic again, but I determined that even that would not deter my decision.)

It is going to take me a few days to sift through all of my recordings and to digest the transcript that was promised by the conference organizers, but I wanted to offer a few first impressions.

It was encouraging to hear a group of serious and committed people talking candidly about the potential for atomic energy to contribute substantially to a cleaner and more secure energy production system that does not sacrifice the reliability that Americans assume almost as a birthright. A number of the speakers were quite clear in their judgement that wind and solar energy were not adequate replacements for fossil fuel. One speaker (and I promise to find the name) used an interesting word about those sources; he called them “cute”. (Something tells me that the people from stopillwind.org would not agree that industrial wind turbines are cute, unless viewed from a significant distance.)

Many of the discussion participants stated their support for a “clean energy standard” that included objective measures of effectiveness. I detected opposition to maintaining an insistence on a standard that uses a politically defined word like “renewable” that purposely excludes nuclear energy from qualifying. The summit participants were too civilized and polite to state it this way, but any definition of “renewable energy” that includes sources like municipal solid waste, manure, wood chips, industrial wind turbines and black liquor but excludes nuclear fission with recycled fuel is an obvious attempt to keep the strongest kid on the block out of a carefully constructed sandbox.

I also heard about the need for some kind of predictability for nuclear plant builders in the form of one or more of the following: long-term power purchase agreements, regulated rates of return with guaranteed cost recovery, or a predictable price on carbon dioxide. I also heard the phrase “cheap natural gas” at least a dozen times as an obstacle to nuclear plant investments.

Fortunately, there were several participants who reminded everyone about the historic volatility of the price of that commodity and reminded them how incorrect long term predictions have been in the past. Unfortunately, one of the people who seemed most confident that our current low gas prices would last a couple of decades was Dr. Chu. It is apparent to me that he knows a great deal about technology, but he has not spent as much time reading the business press or studying price charts.

I learned from John Dyson, a former chairman of the New York Power Authority, that the cost of electricity from Niagara Falls, which had too high of an initial cost to have ever been built by private industry, is measured in a unit that has almost disappeared from the electric power lexicon – it costs about 4 mills per kilowatt hour.

Mr. Dyson noted that when the Niagara Falls hydroelectric plant became operational, it produced so much power that it resulted in shutting down nearly every generator in the entire northern New York region. Said another way, though it was a tremendous boon for power customers, it negatively affected the business of a number of fuel marketers and power plant operators. That is the kind of investment that our grandparents (or perhaps great grandparents) made for us; I hope that we can figure out a way to finance and construct similar long term capital projects that supply our grandchildren with reliable, clean, affordable power.

Chairman Jaczko of the NRC once again demonstrated why it is probably not a good idea to put a 39-year-old (as of May 2009), especially one who has spent his scientific career on Washington DC political staffs, in charge of a key federal agency. That is an important consideration when that agency is the gate keeper for a potentially large nuclear plant construction industry.

I agree that it is important for the industry to have a credible regulator, that does not mean that it is right for the country to have a regulator of a large and complex industry that can only focus on a few things at a time. High quality, service-oriented enterprises need to recognize that a long queue indicates that you need to rapidly open more lanes and demand additional resources, not that customers need to meekly and quietly get into line. This is not the DMV and it is not the Soviet Union.

I also remain convinced that at least some people at the top of the NRC do not understand what is involved in actually building something that you have never built before, even if it is very similar to something that you built a long time ago. Please do not get me wrong – I have no idea exactly what obstacles lie ahead and what kinds of adaptable, creative responses will be required.

I do know that there are inevitable opportunities for learning and revision in every construction process, especially one as complex and with as many components as a new nuclear power plant. The demand for absolute certainty and the lack of a defined process for rapid reviews of changes needed during construction will (I predict) lead to significant delays. I also predict with great certainty that the government regulators will blame the industry for making those changes and for causing the delay. Part of the issue is that skilled commercial project managers understand the need for a contingency fund and pool of resources, many government leaders think it is better to size their organization for a steady st
ate and let the length of the queue vary with peaks and valleys in demand.

I hope they prove me wrong.

The event was well-organized and there were at least some of the right people in the room to initiate an effort that makes real progress in restoring the US nuclear construction and manufacturing industry. I have no doubt that the people there were serious about discussing ways to move forward. I expect that the event sponsors will encourage follow through on the part of the principals. I expect that the principals will encourage and support the deputies who broke into working group meetings for the afternoon sessions. It would be great if this event led to concrete steps, but that will only happen with continuing pressure.

One thing I have learned during my 20 years of enthusiastic support for the idea that it is time to begin building new nuclear power plants in the United States is that the effort is a long, difficult slog. I remain convinced that the effort is worthwhile and that the more people that get involved in pulling, the better chances we have of succeeding in throwing off the deep mud that the opposition has put in our path.

Final note – the event was not a unanimous celebration of nuclear energy. I recognized at least two of the major opponents to any organized effort within the US to regain nuclear technology leadership. Peter Bradford had a seat at the discussion table and spoke several times about his skepticism that encouraging nuclear energy was the right thing for the US government to do and I saw Ed Lyman from the Union of Concerned Scientists sitting in the back row of the observer section. I hope he was not plotting his next move, but that might be a bit over optimistic.

Additional Views of the Summit

You can also find some short thoughts about the discussion by searching Twitter for #nesummit. There were at least four people who were tweeting running commentary during the Summit.