Have you ever been in a room where there are dozens, or even hundreds of people, who are involved in a heated discussion about seemingly intractable topics like producing reliable energy without producing air pollution, producing compact energy that can push ships and locomotives in a world of rapidly depleting petroleum, or figuring out how to provide clean, fresh water in a world where about 99% of the available H2O is either in the wrong place or contaminated with sodium chloride or bacteria? 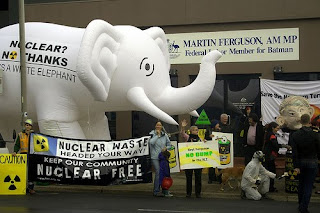 Have you ever waved your hand in vain to try to remind everyone in the room that folks like Fermi and Szilard discovered a real solution and people like Rickover and Kingsley turned that scientific discovery into a real tool to serve human energy needs. For some odd reason, many who talk about energy, worry about energy and dedicate their careers to finding energy solutions refuse to even acknowledge the existence and proven performance of nuclear energy. If forced to acknowledge its presence in the debate, they will do all they can to minimize both its current contributions and its potential for future growth.

I ran across a photo recently of a protest by one of the most infamous anti-nuclear opposition groups – Greenpeace. Apparently the organization is using a large, white, inflatable elephant in European protests. The obvious allusion is that nuclear energy is a “white elephant” that no one wants to have around.

Well, I like imagery and allusions as well. Unfortunately, I am not much of an artist, so I contacted Suzy Hobbs, the wonderfully creative artistic leader at PopAtomic Studios. She turned my idea over to Jonnie. After a little explanation of the American idiom, Jonnie came up with a wonderful illustration to express the frustration that I have often felt about the way that nuclear energy gets treated in the extremely important discussions about our future energy paths. Please go and tell Suzy and Jonnie how much you appreciate this image and the work that they are doing to help those of us who know what we feel about the value of nuclear energy but have trouble putting that into useful illustrations.

Here is another idea that I need to work on. Obviously, fully grown elephants do not have much room to grow. The elephant that Jonnie created looks like it is about as big as it can get – if it gets kept in its current “box”. What if that elephant could be let out of the room and matched up with other elephants? The gestation period is a bit longer than it is for some mammals, but the resulting effect of sustained nurturing could be pretty impressive. A healthy herd would include a variety of sizes and maturity levels of hard working atomic “elephants”.

Of course, the resulting herd of elephants might just knock down a few wind mills and solar collectors on their way to replacing coal, gas and oil – figuratively speaking, of course.

Yesterday – November 10, 2007 – I spent the day with an energetic, excited, engaged and highly educated group of young professionals who are members of the American Nuclear Society Young Members Group, the North American Young Generation in Nuclear or both. They spent the day talking about topics interesting to them – I am…

As part of my preparations for interviewing Ray Haroldsen, one of the pioneers from the National Reactor Testing Station near Idaho Falls, Idaho, I have been reading a fascinating history of the Idaho National Engineering and Environmental Laboratory titled Proving the Principle. (The link takes you to a site where you can download all of…

Though it is most often framed as an academic question where smart people use formulas, spreadsheets and debating techniques to prove that their favorite fuel is better than others, the reality is that energy is a terribly useful product that has real value. The number of potential customers is equal to the human population and…

Steve Packard at Depleted Cranium has published an excellent, well-researched post titled Why You Can’t Build a Bomb From Spent Fuel. It is getting high praise among people who understand the technical and political aspects of the topic being covered. Here are some sample reactions: “In the context of this discussion, this is very useful….

Duke Energy has a plan to increase the capacity of its Cliffside facility located in Rutherford County, NC. The Myers Park Baptist Church in Charlotte recently hosted a public meeting to discuss the expansion plans. According to Drought fires up foes of coal plant: Duke Energy’s plans to expand criticized in view of climate change…